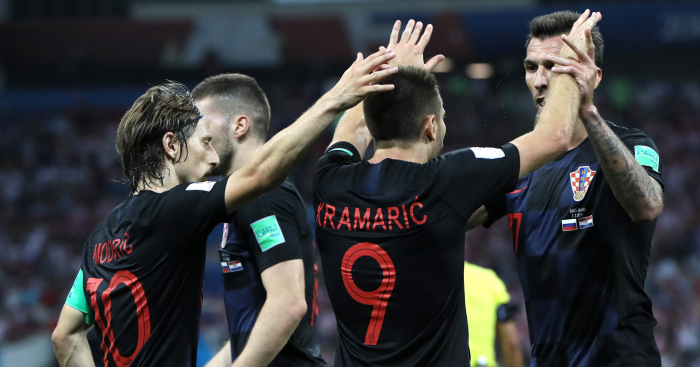 So it’s England vs Croatia. What did we learn about their semi-final opponents?

How much does that take out of Croatia?
The fitness level of most professional footballers is extraordinary, but playing 240 minutes in five days is still a mightily difficult task and one that effected Croatia badly. During extra-time against Russia, they looked absolutely goosed.

Goalkeeper Danijel Subasic has a calf problem, Mario Mandzukic was hobbling around desperately during extra-time and Šime Vrsaljko came off with an injury. He will surely not be ready for Wednesday, and there must be doubts about the other two.

More importantly, Croatia’s energy levels will be low. If England can stay in the match until the last 30 minutes, their substitutes (Marcus Rashford and Ruben Loftus-Cheek in particular) can change the game in our favour. Start at the high intensity that we demonstrated against Tunisia, and keep that midfield working. We must be quicker than in the first 30 minutes against Sweden.

How do you stop Modric?
For all Jordan Henderson’s excellence in this tournament, he has still not come up against an advanced central midfielder who can make life difficult for him. Colombia used Juan Quintero and Juan Cuadrado down the wings, but the absence of James Rodriguez gave Henderson a gentler evening.

That will surely change against Croatia. Luka Modric was effective in the first half against Russia but operated from too deep to hurt their opponents – think Kevin de Bruyne for Belgium against Japan. Then on came Marcelo Brozović and eventually Mateo Kovacic, and Modric had licence to push further forward. It is in those attacking areas that he can really hurt the opposition. Suddenly, Croatia were on top and Modric was playing those dinked and clipped passes that can open up a team.

It will be interesting to see if Southgate makes any changes, with Dele Alli for Fabian Delph a possibility to give Henderson greater support in central midfield, although it would remove a goal threat. One thing is sure: Modric is the one player that makes Croatia tick. Stop him and we have a good chance.

Do we follow Croatia’s fluid forwards?
There are better strike forces left in this World Cup than Andrej Kramaric and Mandzukic, but none that are quite as positionally fluid in their formation as Croatia’s pair. Mandzukic is one of the most selfless strikers in elite club football, happy to be farmed out onto the wing, told to drop deep or play as a target man. Around him, Kramaric drifts too but is also the penalty-box poacher. See the first goal against Russia: Mandzukic’s clever run in the channel, ball crossed for Kramaric’s perfect late run and header.

This makes them incredibly difficult to mark, particularly with Ivan Perisic also switching from left to right as he pleases. Do you assign a man to each of them: Maguire on Mandzukic, Stones on Kramaric and Walker free, passing them on as the situation demands it? Or do you mark zonally and hope that their movement is not enough to cause confusion?

That said, Mandzukic must be a significant doubt for the match, given his heavy limping. That could be absolutely crucial to England’s hopes.

Can we double up on Strinic?
Ivan Strinic is a solid, but unspectacular left-back. He has played well in this tournament, earning a move to Milan, although this has not been a vintage World Cup for left full-backs. More importantly, Southgate might feel that England can double up on him and be confident that he will not surge forward.

Strinic’s weakness is his lack of pace, and with Ivan Perisic ahead of him unlikely to constantly track back, Raheem Sterling should do precisely the same as he did against Sweden: Drift right and either take a central defender with him or give Kieran Trippier an overlapping option. Trippier will out-pace Strinic.

Against Sweden, England generally looked to play low cut-back crosses into the box rather than head-height delivery. Given the physical presence of Dejan Lovren and Domagoj Vida, the same plan seems fair. If Vida is the one dragged out by Sterling, Harry Kane has a one-on-one battle with Lovren. Who remembers Tottenham 4-1 Liverpool at Wembley last season?

Should England be fearful?
Absolutely not. Croatia have one of the best central midfield pairings in this tournament but Ivan Rakitic has not been his usual Barcelona self in Russia, and playing deeper stymies him a little. If Alli or Jesse Lingard can stay central and keep him busy, Croatia can be a little slow to get the ball from their own half to the final third.

What’s more, Croatia have not played particularly well since beating Argentina 3-0 in their second group game. They were fortunate to eliminate Denmark after a rotten second-half performance, and were quiet for long spells against a Russian team who have far less quality than England.

Given Croatia’s workload, they should be more fearful than England. It’s an extraordinary thing to be writing, but England are odds-on favourites to reach the World Cup final. My oh my.