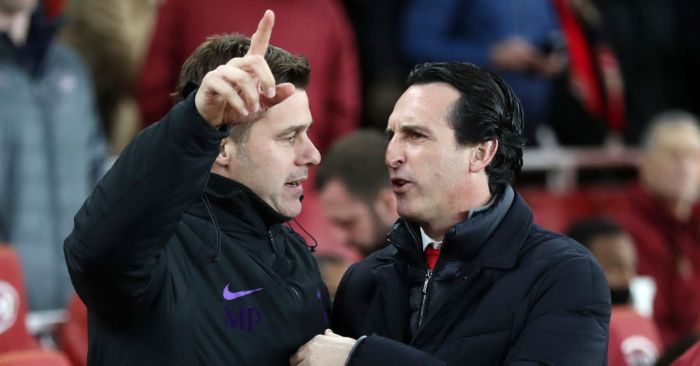 Unai Emery and Mauricio Pochettino will face each other in a league game for the tenth time on Sunday.

The pair have shared a managerial Premier League stage in north London for just one full season, but became acquainted long ago in La Liga.

Emery is just four months older than Pochettino but started his coaching career in 2004 at Lorca Deportivo, at which point Pochettino was still playing at Espanyol. By the time he became their coach in January 2009 in the midst of a relegation battle, Emery was already in charge of his third club.

Ahead of their latest meeting, it seems an opportune time to take a look at some of the key facts and figures of their rivalry.

* The current scoreline in terms of wins is Emery 5-2 Pochettino, with two draws. The Tottenham boss did secure a third win in the League Cup last season but let’s not be silly.

* The scoreline between the two managers in terms of overall goals is 14-14. Emery’s sides have kept two clean sheets in nine games, as have Pochettino’s.

* Despite the fact that Pochettino has only beaten his adversary twice in the league, they are the two biggest wins either manager has enjoyed over the other. Espanyol beat Valencia 3-0 in May 2009 and 4-0 in April 2012, with Emery pursuing Champions League qualification on both occasions.

* Emery’s biggest win over Pochettino was the 4-2 north London derby victory in December 2018, followed by Valencia’s 2-0 win over Espanyol in May 2010.

* Only three managers have beaten Pochettino more often than Emery (5). Pep Guardiola and Manuel Pellegrini both have ten wins over the Argentine; Jose Mourinho stands alone with 11.

* The furthest Emery has ever been in the Champions League is the last-16 stage on three occasions; last season’s runner-up Pochettino scoffs at him.

* Pochettino has managed more games at Tottenham than Emery at any one of his seven clubs in a 15-year coaching career.

* Harry Kane and Pierre-Emerick Aubameyang have both scored two goals in games between Emery and Pochettino. They are level in joint-second with fellow Premier League legends Juan Mata and Roberto Soldado. The only player with more goals in their meetings is…Arsenal nemesis Nikola Zigic (3).