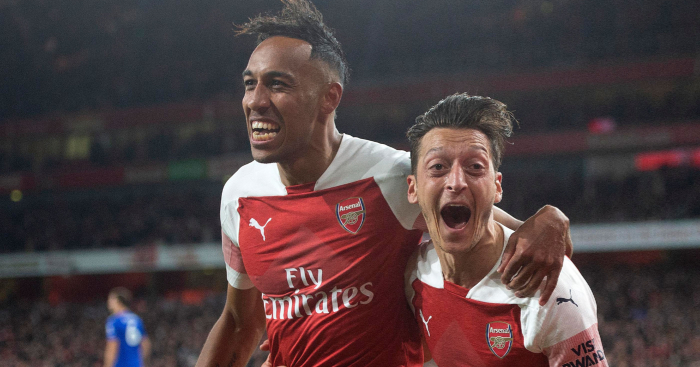 On weeks like this, you just have to marvel at the depth of talent in the Premier League. We love to carp and criticise and say how poor our millionaire heroes are playing, but most of the time the football is remarkably good. I’d watch 20 games a weekend if possible. A 4-2-3-1:

Goalkeeper: Mat Ryan (Brighton & Hove Albion)
Three goals by one player is a hat-trick. So what’s three saves against one player? A St. Peter. We had two of them this weekend, Mat Ryan from Jonjo Shelvey and Hugo Lloris from Marko Arnautovic. Ryan parried a close-range drive, went low to his left, and leapt high on a deflection; Lloris also had a high leap and low left dive, plus a block coming off the line. Ryan gets the nod by adding a good save from Ayoze Perez, and several alert punches/catches on set-pieces. But I’m sure the Spurs cockerel was crowing too.

Jordan Pickford was just behind the heavenly pair with a penalty save, an excellent stop low to his left on a bouncing free kick, and two dashes to sweep. We hear a lot about his distribution, not so much about his speed coming out of his area. It seems at least once a week he gets to a ball you think he couldn’t reach. Is he the best sweeper-keeper in the league? (Haven’t had a long look at Bernd Leno yet.)

Right-back: Hector Bellerin (Arsenal)
A rare outstanding week at right-back, basically a three-way tie between Bellerin, Ashley Young and Aaron Wan-Bissaka. All three had fantastic games: Bellerin scintillating in attack, Young so good on defence that Eden Hazard had to go elsewhere, Wan-Bissaka superb in shutting off Bernard and Richarlison. All three made one huge mistake: Bellerin let Ben Chilwell by him to create the own goal, Young was ball-watching as David Luiz’s header set up the equaliser, Wan-Bissaka failed to close down Ademola Lookman on the killer cross. (Wan-Bissaka also once merely trotted back from an attacking position, leaving space for a dangerous Everton counter.) The Palace man had already been on the list this year, and I went with Bellerin because he rarely gets a mention here, while Young is a regular.

Thoughts: 1) Young may not be the right-back of Manchester United’s dreams, but he still shows up for big games. 2) Errors or no, Wan-Bissaka is a heck of a player, who seems to get better every week. 3) Bellerin still isn’t a defender, but then defence isn’t really Unai Emery’s middle name.

Hector Bellerin already has 4 assists. Emery’s Arsenal create scenarios for the full-backs—particularly Bellerin—to fire low crosses into the box toward Auba/Laca (super finishers). Carry on like this and he’ll hit double figures no problem. It’s sustainable.

Centre-half: Issa Diop (West Ham United)
Not a perfect performance – he was embarrassed by Erik Lamela once, and found himself out of position on occasion – but an extraordinary number of crucial interventions. He covers as much ground as any defender in the league, in fact too much. At only 21, he needs more discipline. Is Manuel Pellegrini the man to provide it? Either way, the Frenchman is forming a very useful partnership with Fabián Balbuena, and with Declan Rice settling in at the holding role, West Ham are finally starting to keep the scores down. Great stat line: six tackles, two interceptions, three clearances, three blocks.

Centre-half: Wesley Hoedt (Southampton)
As Blanche DuBois might have put it, not the gentleman I was expecting. No way Hoedt could hit the list against Bournemouth’s speedsters, but here he is. Just held his position well and turned aside everything that came his way. Once let Josh King get in front of him, and conceded a free-kick near the touchline in stoppage time, but let’s give him the benefit of the doubt. It’s the first time he’s ever been close to the list, and Southampton need plenty of moral support.

Credit where it is due, Hoedt was brilliant today…

His chief competitor was James Tomkins, a more accomplished defender, who was tested in more ways and made a greater variety of plays. But he was slow to react once or twice, and a bit fortunate not to have been called for a penalty when he collared Richarlison. If you saw the clip and think he did nothing wrong, or if you’re just a Palace or Portsmouth fan, put him in ahead of Hoedt. Sean Duffy and Lewis Dunk together had a brilliant match, Duffy excellent in the first half and Dunk in the second.

Left-Back: Aaron Cresswell (West Ham United)
After a couple of weeks without a strong left-back performance, normal service was resumed, with a trio of excellent showings. Andrew Robertson did everything right without doing anything spectacular; Paul Dummett delivered several dangerous crosses and could easily have had a couple of assists. Topping the list is the man with three more England caps than Mark Noble. Passed effectively up the wing, crossed well and was robbed of an assist by Lloris, intervened usefully on several occasions. Has probably supplanted Arthur Masuaku for the moment.

Deep Midfielder: Jonjo Shelvey (Newcastle United)
I’m probably going overboard, but he could play for a top six team right now. Against Brighton, he was what Paul Pogba only wishes he could be, except for the hair of course. A mere 115 touches, which just happened to be 39 more than anyone else on the pitch. Passed incisively in all directions, picked his spots to get forward, broke up play in the middle, was denied thrice by Mat Ryan. The most complete midfield performance of the season so far. At the moment he’s the only thing standing between Newcastle and last pla – oh.

In the last ten minutes we've seen two examples of Jonjo Shelvey at his best. Storming through to win the advantage when Ayoze Perez is fouled – travels and sees his shot blocked. He then picks the ball up again and travels past two players into the box before shooting #NUFC

Deep Midfielder: Étienne Capoue (Watford)
Has been a revelation over the past 20 games or so, and this might have been his best performance yet. Strong, smart and technical. Was always around the ball, with his 107 touches second only to Shelvey on the weekend. Passed superbly both short and long (90.8% completion), and his tackles and pass blocks kept the pressure off the back line. He might have been a bit fortunate on the goal – it went right through Conor Coady’s legs and Rui Patricio appeared to be screened – but a thunderba****rd is a thunderba****rd.

It was a simply super round of games at this position. In any other week, Idrissa Gana would have breezed onto the list with one of his patented I’m-everywhere displays. Aron Gunnarsson of Cardiff, starting in place of the suspended Joe Ralls, was almost as good as his beard. Pierre-Emile Højbjerg, Lucas Torreira and Jonathan Hogg all deserve mentions as well. Torreira is an interesting study: he plays like a terrier but his tackles + interceptions are quite low for his position. Instead he gets to the man quickly and harasses, plus he gets to loose balls quickly and passes well.

Attacking Midfielder: Erik Lamela (Tottenham Hotspur)
A penny for the thoughts of Dele Alli at the moment. Playing on the right side of the two in a 4-3-2-1, Lamela did everything. He moved into the middle and found space, where he was superb in short passing combinations. When drifting out to the wing, he dribbled at will. He made the beautiful run and finish for the only goal of the match. He did his usual dirty work in defence. He’s heading into his prime years. It’s like a new signing!

A new signing for real is Xherdan Shaqiri, and what a pleasure to see him in the middle surrounded by genuine talent. A lovely ball for Mo Salah’s goal, and plenty of good passing at the heart of Liverpool’s attack. I hadn’t thought of him as a Klopp player, but the Reds are doing a little less pressing this year, which can only be to his advantage. A regular starting role soon?

Elsewhere, Abdoulaye Doucouré was crucial to the attack as Watford blitzed Wolves in the first 45. He got a deserved assist on Roberto Pereyra’s goal and a freebie on Capoue’s blast. Mostly defended in the second half, and wound up with almost as many touches as Capoue. David Silva had your basic David Silva match, including the cheekiest assist-that-shouldn’t-have-been of the season. Bobby Reid played deeper than usual for Cardiff, but that didn’t prevent him from nabbing a goal and assist.

Winger: Riyad Mahrez (Manchester City)
Charlie Taylor of Burnley was playing him on to his weaker foot, and doing a decent job of it. When that happens, you check, put it on your stronger foot, and cross from deep. Mahrez put three absolutely breathtaking first-half crosses into the area, which were worth three assists but wound up as a miss and two good saves. So in the second half he took matters into his own hands, with a sumptuous strike. Add in some good passing and even a couple of tackles, and it’s a classic.

Winger: Mesut Ozil (Arsenal)
Golly. Leicester City played on the front foot, leaving lots of space for opposing runners. That’s Ozil’s bread and butter, which in this case was more like the full English. And if you think I’m cheating by putting him on the wing, take a look at his heat map, compare it to Alex Iwobi’s, and then compare them both to Lamela’s. Oh, and golly again.

I hated to leave Anthony Martial off, not only because of the two fine finishes, but because he’s a great talent who would really flourish in a different system. But Mahrez and Ozil did significantly more over 90 minutes. Hopefully Martial can be let loose a bit against the bottom half of the table. Elsewhere, Roberto Pereyra scored a fine goal, was part of the build-up for another, and even made a chance-saving tackle. Up at St. James’ Park, Kenedy looked dangerous every time he touched the ball, but had a big sign on his back reading No End Product.

Striker: Sergio Agüero (Manchester City)
Wouldn’t you know it, the only really thin position this week. Marko Arnautovic continued his dynamic play, and it’s not his fault Lloris was in form – but when you’re put through in stoppage time it’s your job to beat the keeper. Pierre-Emerick Aubameyang scored twice, but only logged a half hour and played as a winger anyway. So it’s Sergio by default. Not a bad game, really: he took six shots, scored the opener, pulled the defence out of position a few times. But he’s not going to request a DVD for his collection.

A special citation for the weirdest moment of the week: Charlie Austin, beating Nathan Aké for pace going for an over-the-top ball. Now that’s a DVD and two Blu-Rays.