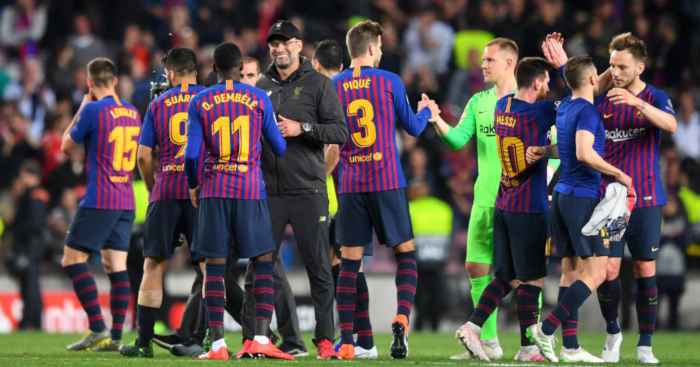 Thank you for your mails. You know what to do – mail theeditor@football365.com

Could Liverpool lose Klopp…
Following the article about Guardiola reaching the end of a cycle with Man City it got me thinking about Liverpool’s next steps and how I reallyy think this season is now or never for them. The below is based on them not winning the league or champions league (although unlike most people I have a sneaking suspicion they will win one of the two…) and paints a pretty dire picture.

I think that this summer could be a perfect storm for Liverpool – they won’t be able/willing to compete on the transfer market, despite being one of the best teams in Europe with a manager that it seems most players would want to play for. The reasoning for that is that both Real Madrid and Man Utd are going to go MENTAL with their spending, it is not beyond the realms of possibility that they will both spend over 250 million this summer. I also reckon Chelsea, if they keep him, will back Sarri to build a team in his own image and they will spend big on one or two players. Then you have Barcelona who need to rebuild an ageing team and will drop a bucketload of cash, they must be aware that it is Messi’s brilliance that has kept them in it this season. PSG will either spend nothing or their Qatari owners will be so furious at only winning Ligue 1 that they will throw another 300 million at their crazy project. On top of that there are rumours that Tottenham will spend some money, obviously being Tottenham they won’t shell out headline figures but could steal a couple of Liverpool ‘up and coming’ style targets. All of this will probably price the kings of net spend out of the market for the top players.

On top of that I can imagine that Barcelona will snap up Salah and Real Madrid will get Mane which could be an absolute disaster for Liverpool. Whilst they would still be solid at the back they wouldn’t have the attacking outlet they do and personally I think they will fail to get out of the group stages and end up 3/4th in the league behind a resurgent Chelsea or Man Utd next season. Even if they do use Salah/Mane fees to buy some up and coming youngsters I think that will be too much to ask for them to bed in during their first season potentially leading to more years of 3-5 place finishes for Liverpool with the odd decent european run.

BUT the real nail in the coffin will come with Klopp….four years ago he said that if Liverpool didn’t win a trophy in four years he would go and manage in Switzerland, well…… To be fair it would position him nicely, take a year out in Switzerland and then take up the Barcelona job in August 2020 (even Barcelona won’t fire Valverde after winning the champions league). It would be perfect for Klopp, rebuilding Barcelona post Messi era, he would know Salah, probably buy Van Djik from Liverpool and he can hopefully guarantee a couple of titles against Pochettino’s Real Madrid the following year……(maybe even a domestic cup)
Tom, Tractor boy in Switzerland (available for Tarot readings as well)

Boohoo
Are Liverpool fans really having a go at Arsenal for winning a trophy?  They’d kill for an FA cup and they know it.  No one cares if you finish second with 109 points, you didn’t win. Don’t get prissy because you lot or your manager can’t get over the line.
S.Singh

Pep did not win the lottery
Just a quick reply to Gary in Germany who calls Pep arrogant for not taking a club who hasn’t won in generations.It often gets rolled out when fans of teams that aren’t Man City are defending themselves.

Pep did not win the lottery and get picked to manage Barcelona, Bayern Munich and Man City.
Pep played for Barcelona and then did his coaching badges and managed Barcelona B.
He did a good job there in a team that played in the system that Barcelona wanted to play, so they decided to promote him (as many clubs have tried before and since) and it worked out well.
He did such a good job there that another elite club wanted to appoint him as manager. and after that good job, guess what? Another elite team wanted him.

He is not arrogant or a fraud because his success has led him to greater success. Just as Mourinho, Ferguson, Klopp., Allegri aren’t either for staying in elite management once they got there. For the counter, Moyes and Rogers worked up to elite management, were fired and had to step back to begin it again.
All the aforementioned elite managers worked up to where they are; Pep just got his elite chance earlier.

Liverpool, Spurs and trophies
There have been a number of interesting letters over the last few days regarding Liverpool being “above” the domestic trophies, squad depth etc.

As a Spurs fan, we are in exactly the same situation. What other fans need to “get” is that scratch below the surface and there is a lot of dross behind the starting XI of both clubs (us even more so, seeing Janssen return brings a tear to the eye, and not for good reasons). Neither have an endless pit of money so things have to be prioritised.

I personally agree with the arrogance angle  – Liverpool are in a title race as much due to a lot of points going their way through consistently incorrect officiating in their favour, as also due to generally playing well. They approached the Barca game thinking they were at Barca’s level, and on a level playing field officiating and luck-wise, took a hiding despite playing well. They aren’t what BBC and Sky crack them up to be that much is for sure.

But for any City fan to turn round and question Liverpool (and Spurs) prioritisation of competitions, misses the point entirely. In order to try and compete with City in the league, neither side with their current squads, has a choice.
NorthernSpur

Hmmmmm…
F365, please help me understand something. So, Arsenal who happened to concede a goal against Valencia, winning 3-1 cannot f*ck it up against a Valencia team that gave them problems in the first leg and are playing the second leg at the Mestalla but Liverpool are still in the tie because they are playing the second leg of the UCL at the ‘almighty’ Anfield, after losing to a Messi Barcelona side 3-0?

Arsenal are notorious this season for having problems playing away. Valencia scored a vital away goal and needs to score just two unreplied goals. And you say Arsenal can’t f*ck it up are practically through to the finals. Yet Barcelona score three against Liverpool without conceding an away goal yet you think Liverpool who has to score 4 unreplied goals to qualify in a best case scenario or 5! If Barcelona scores one in a worst case scenario. I want you to let that sink in. You really think Barcelona won’t score at least one?

You actually believe all Liverpool have to do is score an early goal, make it two before half time then finish it off in the second half, against a Barcelona team that won the first leg 3-0. Against a team that has Messi.

You think because they messed up a 4-1 lead last season they would want to do the same this season? Again you think Barcelona with Messi won’t score at least one goal?

The system is in perfect working order…
Nothing is broken.. Everything is fine.. Please go about your daily business.. Nothing to see here.. Move along..

*whispered* What are you doing Paul? You’re giving the game away! Loose lips sink ships and all that

What? Oh no nothing wrong here.. simply been a small accident.. no one seriously injured.. should be cleared up soon.. Please take this complimentary draw for the inconvenience.
Cevski (just needs to pay off once every 3 games to break even) THFC