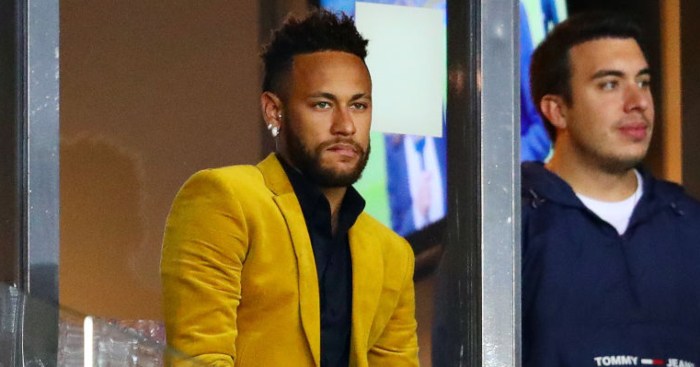 The most expensive footballer in the history of the game is likely to move this summer. In the supposed peak of his career, he will leave one modern superclub for another, and yet it has barely caused a ripple. Neymar’s potential return to Barcelona has reached the smoke and mirrors stage. Barcelona have publicly announced that Paris Saint-Germain don’t want to let him go; PSG have publicly announced that Neymar wants to leave.

That relative lack of hysteria is good, of course. Actual football has been happening and goodness knows we are obsessed enough about the will-he-won’t-he transfer market dance. But while potential moves for both Antoine Griezmann and Paul Pogba grab the attention of the hungry masses, Neymar’s own transfer falls on less welcoming ears.

It reflects a general weariness, a shared Neymar Fatigue Syndrome. We have certain ideas of how footballers should behave and should come across on and off the field, and Neymar has used up his goodwill on both. He is football’s Peter Pan, the boy who never grew up. There is still a strong toddler element to Neymar at his worst, with the tantrum rolls and the screaming and the physical fragility.

Or, to create our own fairytale, Neymar is The Boy Who Had Too Much, bestowed with the many trappings of fame and superstardom and so lost his way in the game. Player power is sold as a universally good thing for those who wield it, but it can drag down the badly advised. Neymar is a marketer’s dream, but you don’t create a legacy on selling power alone. It is that legacy that is seriously under threat.

The nature of Neymar’s game had already begun to play against him before Paris. Skillful footballers will forever be adored, but we cannot admire footballers for their skill alone. At 21 and 22 it was intoxicating to watch Neymar, this two-footed dribbling boy wizard from Sao Paulo, run rings around the bigger boys. But by 27 and after over 550 senior matches, we expect to see a maturity that is defined by experience and a desire to drag the team on.

It isn’t that Neymar isn’t still incredibly talented, quite the opposite. It’s that the application of that natural talent can leave you a little cold. For every wondrous drop of the shoulder and roll of the ball from one foot to the other, defender left flailing like a kitten grabbing at a toy on a string, there is a roll on the floor or an article about his nightlife. To be blunt, Neymar has become a brilliant individual in a team sport. Note the noises to that effect from those watching Brazil excel in the Copa America this summer with Richarlison, Everton and Roberto Firmino as a front three.

The move to Paris may have helped expand the brand, but it has done little for Neymar’s reputation. A financial superpower whose success is built upon transience and covered in gold leaf has allowed those same tendencies in Neymar to be acquiesced. Scoring goals for an embarrassingly dominant club in Ligue 1 – 51 in two seasons at a rate of almost one per game – holds less currency than in Spain, England or Germany, but they earn Neymar the agency within PSG to return to Brazil for his sister’s birthday and persuades the club to turn its face the other way when the professionalism slips.

We should beware of journosplaining here. Neymar may well be very happy with his lot (although is seemingly trying to force a move). If he was to retire tomorrow he would look back with great fondness at his career: league titles in three countries, Champions League winner, Club World Cup winner, 60 goals for his country, the joint-top Champions League scorer once, top Champions League assist provider twice.

Yet we judge success not only by trinkets won but potential reached. During his formative years at Santos and breakout years at Barcelona, Neymar jumped out as a once-in-a-generation talent. At PSG, he has fallen back into the pack. Top 20 best player in the world? Sure. But there’s a difference between rising from top 20 to top 5 and the reverse journey. The former brings cheer, the latter regret.

Perhaps there’s something in the fact that Neymar has had the misfortune to enjoy the majority of his career during the Messi and Ronaldo duopoly. Without them, he would have won the Ballon D’Or in 2015 and 2017, as many times as Brazilian Ronaldo and Franz Beckenbauer did and more than Eusebio and Zinedine Zidane. Would that have changed his legacy? And have Messi and Ronaldo unfairly warped our expectations of the best players blending skill with consistency? Maybe.

Neymar is unlikely to get much sympathy here; tiny violins are being tuned as you read. Nor is he asking for any. He is wealthy beyond most of our wildest dreams. But there is something literally pathetic – as in related to pathos – about Neymar becoming a more and more extreme version of himself while fewer and fewer people take notice.

A move to Barcelona might be the literal reset Neymar needs, two years after he left the Camp Nou. Perhaps a move to Real Madrid might do the trick. But at some point this summer, whatever happens, Neymar needs to rediscover and recapture the drive of what made him such a remarkably effective and effortless attacking talent. Neymar has the superstardom and he has the talent; he just needs to learn how to become a footballer again, and once more show us how we can love him.