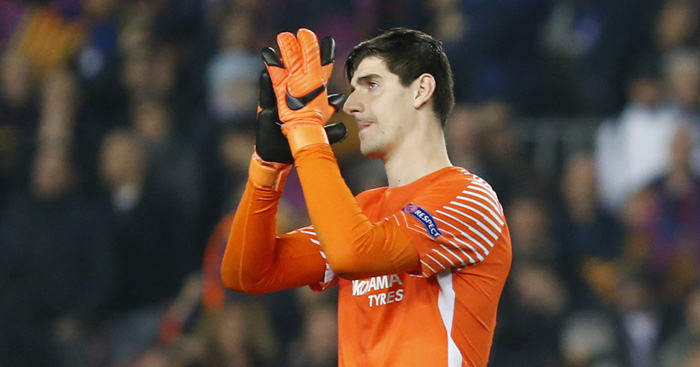 If the continuing popularity of police procedural dramas proves anything, it’s that there’s nothing more satisfying than having our suspicions confirmed. Two of your friends have been hooking up? I knew it! That guy you don’t like in the office is the one who’s been stealing your yoghurts? I was onto you the whole time, Matt. Footballers are money-grubbing mercenaries? We had them pegged.

Let’s use Thibaut Courtois as the example here, since he is the latest in a long line of footballers to have earned the ire of fans because of the nature of their departure. We could just as easily be talking about Raheem Sterling or Fernando Torres or Dimitri Payet or Riyad Mahrez; most fans react the same way.

The goalkeeper will be treated by many (but not most) Chelsea fans as just another entitled footballer employing underhanded tactics to force a lucrative move. Footballers, as the popular opinion goes, just love lucre. “Look at him, he’s only in it for the lucre,” we say, “That’s why they insist of being paid in rubies and doubloons.”

Find it amazing that on one hand @thibautcourtois is going to leave by force but @hazardeden10 on the other hand has accepted @ChelseaFC decision & again played to his full ability last night.Also @_OlivierGiroud_ mentioned Eden even tried to convince Nabil Fekir to Chelsea. #CFC

It is an understandable position to take, because many fans are projecting literally themselves and their circumstances onto the player. Of course you’d give up your boring administrative job at Europe’s fourth-biggest producer of corn-on-the-cob holders to play for Chelsea, and you’d be so grateful for the opportunity that you wouldn’t dream of leaving, not even if Real Madrid came in with a massive bid.

Clearly, that’s not how it works for footballers. Quite why anybody would expect a Belgian – who moved under similarly acrimonious circumstances to get his move from Genk to Chelsea in the first place – to show the same loyalty as a scrappy west London kid made on the mean streets of Kensington is a mystery for the ages. After all the club did for him! Purchasing him like a commodity and paying him his agreed wages! What a nerve.

The reality is that Courtois has acted entirely rationally. His children live in Madrid with his former partner, for a start: most people would see that as kind of a big deal. Football isn’t like most other jobs; you can’t just apply for an equivalent post in a different city. If the stars aligned for you to go to the same job at a more prestigious company in the city where your children live, paying you an equal or greater amount of buried treasure, wouldn’t you do everything you could to make that happen?

For example, given that plenty of big clubs are loath to do business in the January transfer window, particularly for goalkeepers, 26-year-old Courtois would likely have only had three more opportunities at most to make this move happen. The fact that Real have moved for him at all, rather than continuing to pursue David de Gea, is a further reminder of the need to seize opportunities while they are there. If that means acting like a bit of a sulky, unprofessional knob for a few days, you’d do it, particularly if your trusted advisors suggested it could hasten the process.

We criticise players for losing what we previously perceived as a sense of loyalty, but for our part we have essentially forgotten they are human, and that is much worse. Like any chicken and egg situation, trying to figure out which came first is now immaterial.

Besides, the ‘loyalty’ argument entirely ignores that we, the fans, are the first to turn on the players if we feel that their performances are not up to scratch: ask Loris Karius. We are constantly looking for a negative portrayal to confirm our worst fears, whether that’s “they’re not good enough” or “they’re not dedicated enough” or “they’re not loyal to the club”. This makes our relationship with players like that of a cheating boyfriend who nonetheless treats his partner with paranoid disdain, convinced that they must be doing the same thing and despising them for it, at which point they might as well just do the dirty for all the difference it makes.

The shift towards seeing football as entertainment may be partly to blame for this, because it sets expectations at an unrealistic level.  Sport isn’t true entertainment: a bum note here or there isn’t enough to totally ruin a musician’s performance, yet can make an elite sportsperson look like an incompetent boob. Fans are ruthless and will turn on you in an instant; footballers owe them nothing.

And most clubs certainly don’t do their part either. Players are constantly told they are free to leave, which is so clearly a “please just f**k off” that barely anyone beyond Winston Bogarde ever goes full Father Stone and says ‘nah, I’m fine here, thanks’, happily playing out the rest of their contract training with the reserves and raking in those sweet pieces of eight.

Ultimately, whenever a footballer says they want to leave, us fans are just observers in an employment dispute, and we’ve already made up our minds who we think is in the wrong. Perhaps it’s time we realised there’s no reason for us to take it so bloody personally.