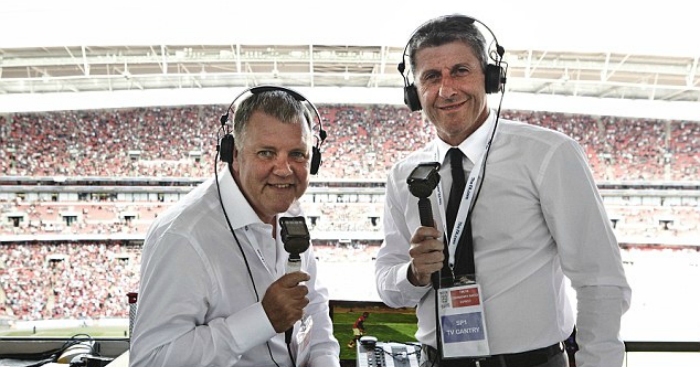 As you may have already heard, ITV have demoted Clive Tyldesley from his position as their lead commentator. He will no longer work on England games and has been replaced by Sam Matterface. It is a mark of his passion and commitment to the job that he is so understandably upset and mystified by this turn of events.

ITV have replaced me as their main football commentator… pic.twitter.com/S8UOjvwEck

I’m not sure if the people who made this decision have any idea how loved Clive is, but the response to his video was one of overwhelming surprise and shock. The feeling that this was an utterly bizarre decision was widespread.

Because Clive is brilliant. Why would anyone replace someone who is the best? I highly recommend this interview with Jonathan Liew from two years ago. It reveals a man who really thinks about his art form.

Worse still, they have not deemed it necessary to give the man a reason for this change. That is disrespectful to him and to us too. It is possibly the most appalling thing about the whole sorry mess. Is this how things are done now? Clive had worked for ITV for all of his TV career except for four years in the 90s on the BBC. He’s been their main commentator for 22 bloody years and he damn well deserves better.

Niall Sloane, Head of ITV Sport said: “On behalf of ITV Sport, I would like to thank Clive for his superb work leading our commentary on some of the biggest occasions in world football throughout his outstanding career with us.

“We are very glad he will continue with us and look forward to working with him on many more occasions in the future.”

All standard corporate press release stuff and very disappointingly, it offered no reason for this move; it really should have.

We have a very close relationship with commentators. Let’s not forget that ITV’s broadcast of the 2018 World Cup semi-final between England v Croatia attracted over 30 million viewers in total: the single biggest audience for a one channel broadcast in UK broadcast history. And who was on the microphone? Clive.

So demoting Clive, even if he’ll still be around in a reduced role, is personal to us. It affects us. That’s why we deserve to be given justification for the decision.You know when someone is important to the DNA of not just a sport but of society when they become embedded in how we talk. How many of us, when turning something down, or disagreeing now say “…not for me, Clive.” OK, the line belongs to Andy Townsend, but it is Clive that is forever preserved in the collective imagination, in this way. It is even one of our best selling t-shirts

Commentating is an unusual job but one axiomatic to the broadcasting of a game. They are an invisible but important part of the football furniture. In a very real way, they define moments in the sport’s history and it becomes impossible to remember those moments without their voice being present. If you listen to Brian Moore’s commentary of Geoff Hurst’s third goal in the 1966 World Cup Final, it doesn’t sound right. We only know that moment via Kenneth Wolstenholme’s era-defining “some people are on the pitch, they think it’s all over…it is now”. That became an aural icon of that moment.

In the same way, Manchester United’s last-gasp victory over Bayern Munich in the 1999 Champions League final is for many inseparable from Clive’s commentary. Even now, 21 years later, it really stirs the blood.

Such moments of greatness give Clive his heft in the business. He is a master of the art of commentary, who all but invented the way it is done in the 21st century. He’s also an incredibly generous person who has given advice to and mentored many.

Very disappointed to see this news today. Clive is a brilliant commentator and has always been very generous with help, advice and knowledge whenever I asked https://t.co/BwPM5LAKx8

You know when someone is important to the DNA of not just a sport but of society when they become embedded in how we talk. How many of us, when turning something down, or disagreeing now say “…not for me, Clive”. Okay, the line belongs to Andy Townsend, but it is Clive that is forever preserved in the collective imagination, in this way. It is even one of our best selling t-shirts.

That’s why this feels personal and it’s why it makes no sense.

Clearly, everything moves on. Changes have to be made at some point and new blood given a chance. Clive is 65 – though he’s the youngest-looking 65-year-old I’ve ever seen, time seems not to leave a line on him – and we know there is a general trend in broadcasting to move the old guys on and that the obsession with youth leads to blatant ageism.

But we do need new voices and new perspectives. Football broadcasting has long drawn from too narrow a section of society. So if Clive’s defenestration was in favour of, say, a female commentator, a BAME commentator, or even a young commentator, then that would be way more understandable than to replace him with another middle-aged white dude. Clive is not being sacrificed in a move towards diversity, that’s for sure.

This is not a criticism of Sam Matterface at all. He’s good and has already done some of the hard yards. But do we get anything different, more progressive, more insightful from this change? No, we don’t. We lose more than we gain.

So we’d like a reason for Clive’s demotion, please. He deserves one. We deserve one. This isn’t a mere shuffling of the anonymous, faceless corporate deck, this is personal.

Better still, we’d like the decision to be reversed; indeed, it would be easy to suspect that one of the reasons no justification has been proffered is because it cannot be justified.

Removing Clive from his position as main ITV commentator? Not for me, Clive.