Home F365 Features Jack Grealish, diving and the utter failure of the law 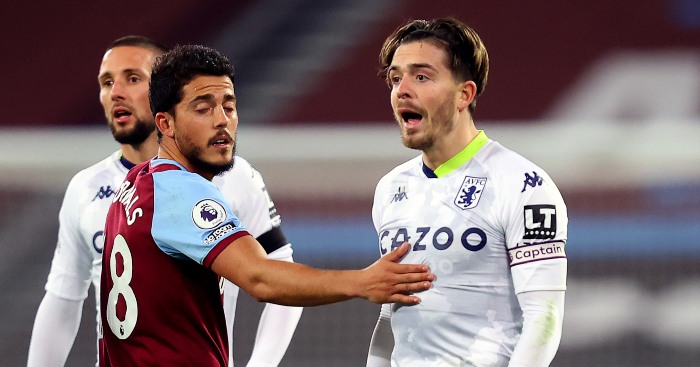 ‘It’s just part of the game – accept it already.’

‘If he hadn’t gone down, the ref wouldn’t have given it.’

‘Honesty doesn’t get you three points.’

These are some of the usual lines trotted out by fans in the aftermath of a controversial diving incident.

I am utterly fed up with these excuses for diving, but I’ve grudgingly accepted that it has become so engrained, it’s probably impossible to completely eradicate. That being said, Jack Grealish’s delayed tumble against West Ham on Monday night was so brazen I feel it deserves some special attention.

This type of ‘simulation’ falls firmly into the most embarrassing category of diving. It’s an easily identified subset, where the player takes that bit too long to get from the initial contact to the realisation that ‘hey, you know what, I can go down here’. Then comes the inevitable, artificial-looking plummet to earth.

Following some minor contact with West Ham’s Pablo Fornals, the 25-year old England international hit the deck clutching his leg, but only  after taking a moment or two to consider the benefits of going down. During that brief pause he made a conscious decision, one that resulted in a booking for the hapless Fornals. This deliberation is what leaves the sour taste.

Even if this were a one-off occurrence, social media probably wouldn’t let Grealish off lightly, but this is not his first offence by any stretch.

Why a player of Grealish’s exceptional talent feels this is a necessary part of his game is beyond me. Sure, it’ll buy his team a few fouls. A penalty here, a yellow card there. It may bring him success, but at what cost to his standing within football?

They say your reputation is in the hands of others. You can’t control that. The only thing you can control is your character. So what do these repeated incidents of simulation say about Grealish’s character?

Perhaps this propensity for theatrics is merely a part of the elite modern-day footballer’s make-up. Indeed one needs only to analyse the countless diving compilations to recognise the tangible link between star quality and simulation.

The same names pop up, over and over. Ribery, Robben, Ronaldo (Cristiano), Drogba, Gerrard, Rivaldo, Suarez, Neymar, Kane, Salah, Bale, Mané. I sometimes have to remind myself that I’m reading about accused cheats; these are some of the most prominent players of their respective generations.

Though I hesitate to use the words ‘in Grealish’s defence’, diving has been a part of the game for an age now. The precedents were set long before the current crop of floppers took to the stage.

Grealish is of course not the only current Premier League star who has been on the receiving end of a backlash for such antics. Earlier this year Bruno Fernandes (vs Aston Villa) and Sadio Mané (vs Bournemouth) both incurred the wrath of opposing fans for incidents of perceived blatant simulation.

So why are more players not punished retrospectively by the FA?

At the beginning of the 2017/2018 season the FA announced, to my delight, new powers which allowed them to retrospectively ban players for simulation. In the FA’s words, they could punish an action which ‘successfully deceived a match official’.

This new system was seen as supplementary to Law 12 of the FA’s Laws of the Game, which concerns unsporting behaviour. In truth it has fallen well short of that objective, mostly due to the constrained criteria and convoluted procedures created by the FA.

It’s not a simple process. First an incident must meet the requirements for the FA to look at it, and the FA’s on-field football regulation team must concur that it is worthy of review. Then it is taken to an independent panel, consisting of an ex-referee, ex-manager and ex-player.

The panel must then reach a unanimous decision that ‘there is clear and overwhelming evidence to suggest a match official has been deceived by an act of simulation and as a direct result, the offending player’s team has been awarded a penalty and/or an opposing player has been dismissed’.

Herein lies the main flaw. The change that was supposed to act as a deterrent has seemingly been doomed to fail from the outset.

In limiting the possibility of punishment for players who have conned the referee with a dive outside of the box, or those who have committed an offence that didn’t lead to a red card, the FA merely set the parameters within which players may deceive without the threat of retrospective persecution.

The handful of retrospective bans carried out since the incorporation of these new procedures in 2017 tells you everything you need to know about the ineffectiveness of the FA’s new powers.

The first high-profile retrospective ban was handed to Everton’s Oumar Niasse in 2017, in the aftermath of his side’s 2-2 draw against Crystal Palace. He received a two-match ban for his part in winning a penalty which was deemed to be an act of simulation.

A few weeks later West Ham’s Manuel Lanzini won a penalty in their 3-0 victory over Stoke City. He too received a two-game ban, having been accused of ‘drawing the challenge’ of Stoke’s Erik Pieters.

On-loan West Brom striker Dwight Gayle was punished by the FA in February 2019, following West Brom’s game against Nottingham Forest in the Championship. The Baggies forward was adjudged to have successfully deceived referee Lee Mason after he won a late penalty.

Then there was Leeds striker Patrick Bamford’s role in the sending-off of Aston Villa’s Anwar El Ghazi back in April 2019. Bamford collapsed to the floor clutching his face following a scuffle in the aftermath of Mateusz Klich’s controversial opening goal in a 1-1 draw at Elland Road. The former Middlesbrough man was also slapped with a two-game ban.

Burnley manager Sean Dyche had hoped VAR would play a leading role in putting an end to the scourge that is diving. As one of the most vocal critics of simulation he has often proclaimed his sheer disillusionment with how little drive their seems to be to utilise the technology in this way.

According to Dyche: “VAR could clean that out of the game very quickly, but no one wants to, it seems. I think there’s bigger pictures VAR could be used for, for the good of the game. At the minute it’s just to officiate the game, which is obviously the key thing.

“But some of the things I’ve seen with people falling over, as usual, it’s bizarre to me that VAR isn’t used more wisely to get that out of the game. I’m not talking about getting a touch and going down, I’m talking about absolutely clear-cut cases of people diving on the floor. That should be out of the game and disappear with VAR.”

It’s true that VAR may some day put an end to a need for retrospective bans for incidents related to penalties and red cards. If it can reach an acceptable level of general officiating on the day, then perhaps we can move on to rooting as much of the ugliness of simulation out of the beautiful game as possible.

Diving is a poison that has slowly seeped into the very core of our game. Though we have become somewhat numb to it, it’s never too late for change. Hopefully.