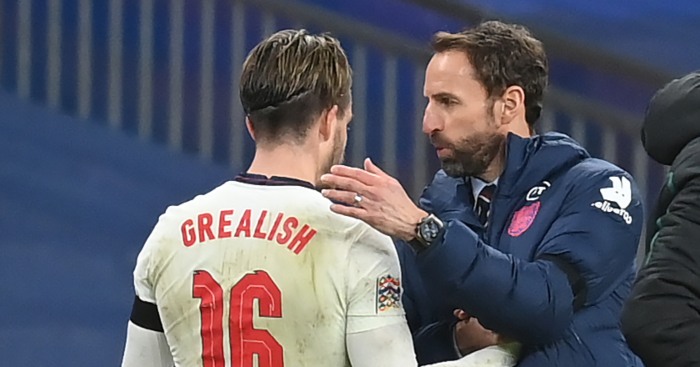 Jack Grealish is not in England’s starting XI when everyone is fit, says Sky Sports pundit Jamie Carragher.

The Aston Villa man has started three England internationals this week against Ireland, Belgium and Iceland but he benefited from the absence of Raheem Sterling and Marcus Rashford.

In Gareth Southgate’s chosen 3-4-3 formation, Grealish plays on the left side of Harry Kane so is in direct competition with the Manchester United and City forwards.

Grealish did not score or assist in the 4-0 win over Iceland but he was fouled six times, winning the free-kick which led to the opening goal.

“Your first question is: is he in the squad? He’s almost certain to be in the squad, I think,” Carragher told Sky Sports. “But starting XI? Even after that performance, I’m not sure.

“That’s my big problem with the system at the moment. In this system, when everyone is fit, I don’t think Jack Grealish plays.”

Alex Scott agreed, saying: “It pains me, but I agree with Carra. It’s hard to fit him into a system. When you’re playing at a tournament against the top teams, when a player needs to be disciplined to defend or do the other side, it’s hard.

“I think he’s a player that every England fan, us included, gets excited about. We’ve said this about Grealish – let everyone else make the noise, go back to your club and carry on playing the way you have been.”

Other pundits have said Grealish must be in England’s team, with Ian Wright telling Ringer FC’s ‘Wrighty’s House’ podcast:

“I’ve been beating the drum for him to be in the side. Since he’s come on the scene, the way his game’s progressed and what he’s done now and me calling for him to be in that squad because he’s the player we’ve needed and the stick I was getting…

“I was reading some nasty stuff from stuff people in respects of, ‘We lost the game, why’s everybody going on about it?!’.

“What Jack Grealish showed in that game against Belgium – which is a team that’ll probably be challenging – was that is the player that we are going to need.

“Nobody is saying ‘build the team around him’. Yes, you can funnel the ball to them but you’re not building everything around them.

“Because even Diego Maradona in ’86, the team wasn’t built around him. He had unbelievable players. Even with that team, they had brilliant players around him. Maradona was the icing on the cake.

“All we need for Jack is to just pop up in those areas and just keep things moving. The little bit of skill he did there against [Thomas] Meunier, the way he was taking people on, dropping back into the left-back spot and whipping a great ball over into the left wing area.

“He’s someone that progresses the ball wherever he ends up on the pitch. What really annoys me is people saying, ‘Oh, you’re going way over the top!’. I’m not going over the top. When you watched us against Croatia, with nobody to bring us the chaos… Grealish brings chaos.”