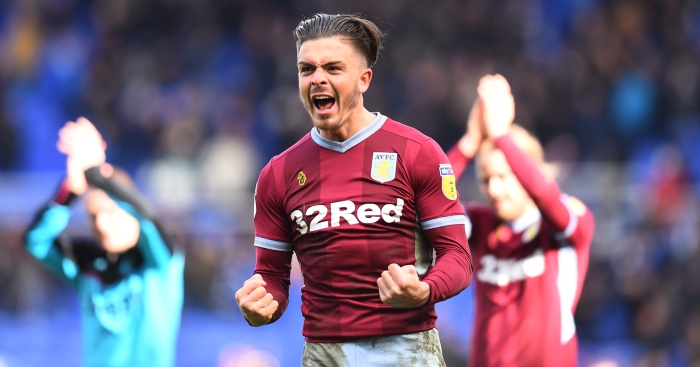 If Jack Grealish was the invention of a children’s comic book writer you’d roll your eyes at the use of such a hackneyed old trope. The playful swagger, the cheeky good looks and the rolled-down socks: Grealish is a local hero whose performance on Sunday hit all those Roy of the Rover clichés. His rise, from sprawled on concrete in Tenerife to captain in the Second City Derby, from being assaulted in the first half to scoring the winner in the second – a redemption story inside a redemption story – was just…bad writing.

The despicable actions of the Birmingham City fan who threw that punch at St. Andrews should be treated with the utmost sincerity, and yet it is worth revelling in the poetry of Grealish’s response. What maturity he showed to remain calm during the incident and then recover to do what he always does: take a game by the scruff of the neck and carry his team-mates over the finishing line. It was a timely reminder, following ten weeks on the treatment table, of his remarkable talents even when faced with the most extraordinary of psychological barriers.

And his performance on Sunday typified his best qualities; an ability to weave through a congested midfield, to ride challenge after challenge and keep pushing the ball straight through the heart of the opposition. Grealish was omnipresent in the derby, the highlight – aside from his winning goal – a delightful through ball with the outside of his right foot that put Anwar El Ghazi clean through on goal. It was the casual flicker of genius that Villa fans regularly witness, the sort of moment that can give players like Grealish an otherworldly aura.

It’s a feeling that’s also present in the somehow nostalgic, romanticised way Grealish kicks a football, his gait strongly evoking how George Best seemed to caress the ball like it was an ice hockey puck, limbs flailing slightly as he jumped tackles and dodged pot-holes. That comparison might seem glib, but Grealish is truly worthy of the hype – he’s just been hiding in the Championship too long for most people to notice.

When Tottenham Hotspur almost paid around £40 million to sign Grealish last summer many supporters were surprised by Mauricio Pochettino’s keen interest, but in Birmingham there was bemusement that Daniel Levy refused to cough up the money, or that more clubs playing Champions League football weren’t making enquiries. Had the deal gone through Grealish would already be an England regular, and at least knocking at the door for a starting place ahead of Christian Eriksen or Dele Alli.

If that sounds far-fetched, then consider the extent to which Grealish is hacked down at Championship level and the disadvantages of being such a large fish in a small pond. Knowing his gifts are considerably above England’s second tier, Grealish is surrounded by opponents who would rather kick him to the ground than face the humiliation of chasing his shadow; Grealish is fouled an average of 4.7 times per match, almost double the next highest in the division.

Spent too much time trying to foul Grealish for no reason and not trying to play our game against a vulnerable defence. The constant fouling on him ultimately drived him on to score. Embarrasing tbh. #bcfc

As a less conspicuous figure at a Big Six club, Grealish will have far more space in which to operate, not to mention better players around him to get on the end of his through balls and pinpoint crosses. It might be counter-intuitive, but Grealish isn’t simply dominating an easier league – he’s being held back by playing at a lower level.

Making headlines is exactly what Grealish needs to remind the country of the hype he once generated, and following that preposterous volley against Derby County the previous weekend, the revenge narrative from St. Andrews may be enough to get Spurs’ attention – and perhaps Liverpool’s too.

Jurgen Klopp has lacked a Grealish type all season, a player to consistently break the opposition lines by arrowing straight towards goal no matter the claustrophobia in central midfield. The 23-year-old’s arrogance in possession is precisely what Liverpool need when facing bottom-half clubs. The same could be said for Arsenal, who need to replace Aaron Ramsey (and possibly Mesut Ozil) this summer, while Maurizio Sarri’s search for a piercing playmaker in left-centre midfield should lead him to Grealish.

Not that Grealish’s Villa legacy is necessarily over. Victory over Birmingham City lifted Dean Smith’s side to within four points of the play-offs, and although Villa’s patchy campaign makes a late surge appear unlikely, Grealish’s return from injury is a game-changer. Villa have won 39 points from 23 matches Grealish has started this season, and just 12 points from the 13 when he was absent. For a man whose iconic playing style and eye for narrative reads like a tacky kids’ book, triggering an unlikely promotion to the Premier League would be a fitting final chapter in his Villa career.