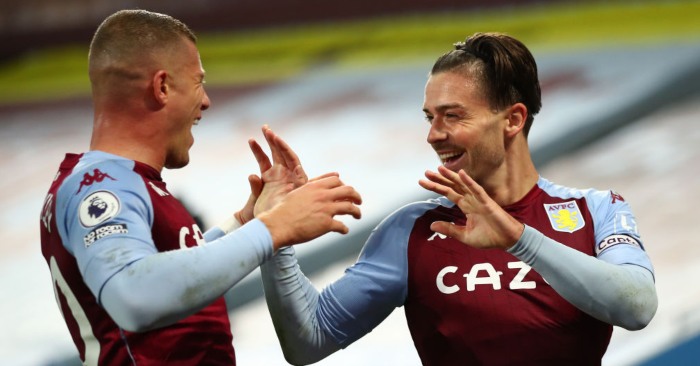 When Mediawatch sees that Danny Mills is trending on Twitter, Mediawatch gets giddy. So it’s a shame that Danny Mills does not say anything truly preposterous on talkSPORT about Jack Grealish; lost in the social media ire are Mills’ description of Grealish as “superb” and a “fantastic player”, among other things.

By who? Extensive Googling has not revealed an answer.

“Let’s just calm down with the hype a little bit; this is not Lionel Messi we’re talking about; this is not Cristiano Ronaldo scoring untold amount of goals…”

Pretty sure you are the first to make that particular connection, Danny.

“I keep hearing Jack Grealish is a world-class player…”

Maybe stay off Twitter, Danny. And not just because every Villa fan has just called you a c***.

Mind you, this nonsense is not helped by The Sun wheeling out Bryan Robson to say that “no English player in recent years has excited me as much as Grealish does” while comparing him to Paul Gascoigne at some length.
Which takes us back to 2016 when a certain Mr Bryan Robson said this about Ross Barkley:

“Then we have Barkley who, like Wilshere, can provide something special. And I think a competition like this could just make him – he could become our new Gazza.

“Just like Gascoigne, he has got so much instinctive ability. He’s got quick feet, can ghost past people and has good vision.”

Conclusion: These comparisons are really not helpful.

Also not helpful is a Sun graphic comparing the England careers of Gascoigne (57 caps) and Grealish (four caps). You will be astonished to find that Gascoigne has more goals, yellow cards and major tournament appearances. Maybe Grealish is not the new Gazza after all.

Mediawatch enjoyed the back-page headline of ‘Injury hell headache for Gareth’ in The Sun, who bemoan that the withdrawals of Raheem Sterling and Jordan Henderson ahead of a dead rubber Nations League match ‘leave England with a 22-man squad’.

And what could possibly be more hellish than having a squad one short of the usual 23 allowed at a major tournament?

No alarms and no surprises

A Premier League record of 16 positive coronavirus tests is described as a ‘major concern’ (The Sun) that will ‘set alarm bells ringing (Daily Mirror) on the tabloid back pages but Mediawatch did the maths and the positive tests mean that one in 75 have the virus in the Premier League. As the ONS estimated last week that one in 85 people in England has the virus (and that number is rising), that all seems pretty normal for people who have more contacts with other individuals than most people in England.

Should we be alarmed that footballers are not somehow immune?

Stan Collymore has England ideas and he is ‘the man who always speaks his mind’ in the Daily Mirror.

His ‘preference would be for a 4-2-3-1, which would cover the back four and give lots of support to striker Harry Kane’.

So, fewer centre-halves and no actual holding midfielder? It could only be the work of an ex-striker.

Elsewhere, Collymore urges Arsenal to bring in Edwin van der Sar and Marc Overmars because ‘surely they don’t want to let another club legend slip through the net as they did with Patrick Vieira’.

Yes, Arsenal really must rue the day they missed out on Vieira, currently on a run of two wins in six games at Nice.

The headline at the top of the Mirror football website on Tuesday morning reads thus:

And what was this ‘damning admission’? Did he admit he made a big mistake because Arsenal are sh*t? Did he admit Willian is past it? Or did he look at the Premier League table – with Arsenal in 11th – and conclude that the Gunners are ‘a long way’ from where they want to be?

The latter, of course. Come back to us when he claims to be happy in mid-table.

Talking of Arsenal and the Mirror…

Does it matter that neither of them mentioned Arsene Wenger or his ‘mistake’ when talking about the excellent Serge Gnabry?

Apparently not. It’s 2020 and there are no rules anymore.

Even leaving aside the terrible grammar in the headline…

…this is pretty rotten fare from the Mirror website.

It takes eight paragraphs for them to concede that ‘Scholes hasn’t directly responded to Fernandes’ comment‘, which seems quite important, but then they claim that ‘revealing how the praise made him feel – and no doubt, how the praise from Fernandes would make him feel – Scholes claimed it embarrasses him’.

No doubt? Scholes was talking about quotes from Pele, Lionel Messi and Cristiano Ronaldo, not Bruno bloody Fernandes.

“These aren’t just run-of-the-mill players and coaches. These are the best players who played the game: Zidane, Messi, Ronaldo.”

So we think there might be a ‘doubt’ that Scholes would be ’embarrassed’ to be praised by a current player at a pretty woeful Manchester United.

Oh wow. Just wow. This is the (top) headline on Tuesday morning on MailOnline football:

‘They were legends as players, but now Xabi Alonso, Xavi, Raul and Robbie Fowler are in VERY humble surroundings as managers… so can they and these other fledgling bosses reach the summit again?’

The capitalisation of VERY is so utterly random and yet it makes us think that these surroundings must be VERY humble indeed. Frickley Athletic? Emley?

A former title-winning club in the Championship (Wayne Rooney)

A club at the top of the Qatari league (Xavi).

The B team of Real Madrid (Raul)

VERY humble. Bet they all have to paint their own white lines.

Jonathan Liew on the Mail on Sunday v Marcus Rashford