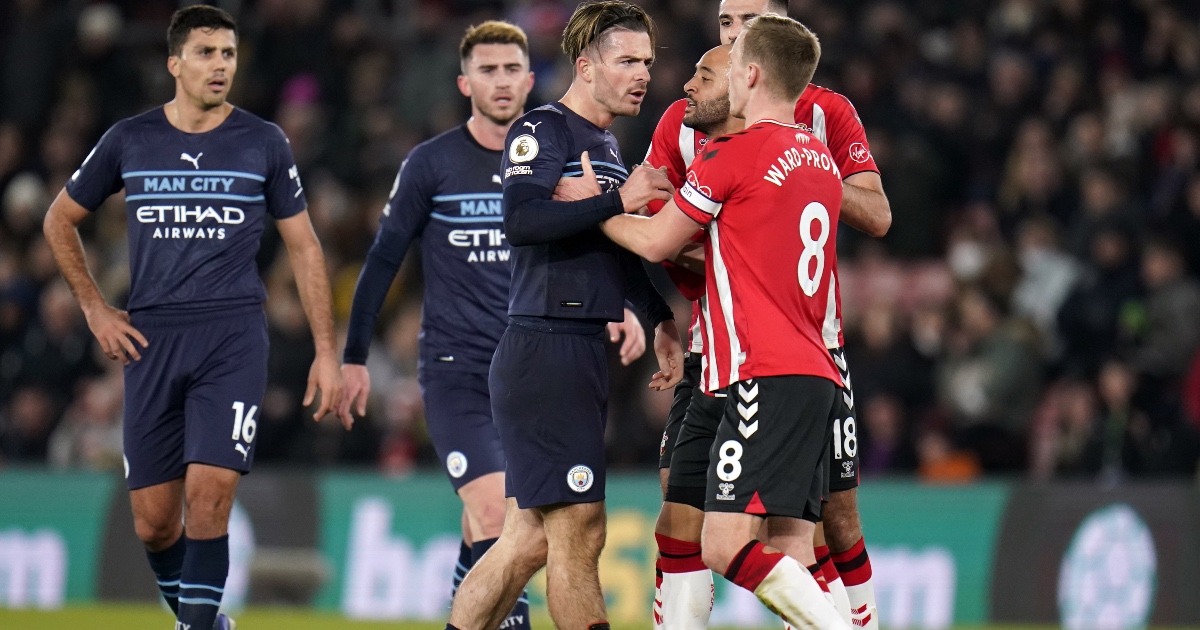 Jack Grealish had words with Southampton’s Oriol Romeu in the tunnel after Saturday’s 1-1 draw with Manchester City, Saints boss Ralph Hasenhuttl has revealed.

On what was a difficult evening in an unfamiliar false nine position for the England international, Grealish went down in the second half, holding his ankle after being tackled by Romeu.

He then got up and pushed the midfielder away, before confronting him in the tunnel after the final whistle. The draw brought City’s 12-match winning run to an end.

Hasenhuttl said of the incident: “They had a discussion with Ori, because Grealish was waiting for him in the tunnel because of a few things that happened outside on the pitch that was not right.

“But it’s not here for the cameras, they spoke about it, everything’s good.”

Southampton got off to a blistering start when Kyle Walker-Peters capped a fine move with a thumping volley into the bottom corner in the 7th minute.

City then wrestled back control and were piling on the pressure when Aymeric Laporte headed home a deserved equaliser midway through the second-half.

Kevin De Bruyne would strike the post as City pushed for the winner but it never materialised, meaning Pep Guardiola‘s men had to settle for a point.

Nevertheless, the Catalan was pleased with his side’s performance. He told Match of the Day: “They defend well and are incredible on the counter-attack but I thought we passed really well.

“Armando Broja and Che Adams are so strong and it is not easy to contain them, but we did it.

“The result is the result, but the performance is much better than at Arsenal, for example, where we won. The last games we played against Southampton over the last two or three seasons, this was our best performance.

“I can see they are happy with the points and congratulations to them, they played a great game.”

City’s next league fixture is the home clash with Brentford on February 9, which will take place three days after their FA Cup tie with Fulham. They won 4-1 against Swindon Town in the third round.