"The record Dortmund have got with young players in recent years is unrivalled in European football." 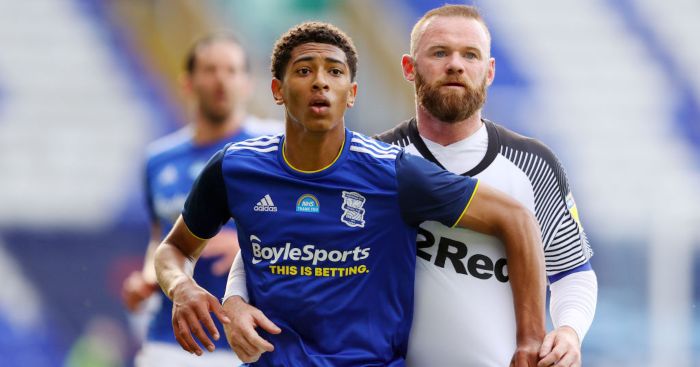 Jude Bellingham has revealed that a chat with Borussia Dortmund winger Jadon Sancho helped persuade him to join the Bundesliga outfit after he’d also been heavily linked with Man Utd.

Bellingham, 17, sealed a life-changing move to the Bundesliga on Monday. He joins a side boasting some of the most exciting young talents in Europe – himself, Sancho and Erling Haaland among them.

However, United were heavily targeting a move for the former Birmingham teenager in previous months. Before the coronavirus lockdown, he toured the Red Devils’ Carrington training complex with club legend Sir Alex Ferguson.

Speaking after signing on the dotted line at Dortmund, though, Bellingham says a chat with Man Utd target Sancho helped him decide.

“The record Dortmund have got with young players in recent years is unrivalled in European football,” the midfielder said (via the Manchester Evening News).

“Weighing all that up and the people we met there, the stadium and fanbase, it made me fall in love with that club as well.

“I’ve met Sancho and we have spoken. He is a great example of what you can achieve if you do the right things.

“I chose Dortmund because it is the perfect step for my development.”

Sancho moved to Dortmund from Manchester City in 2017 and has since developed into one of Europe’s most exciting young attackers.

This season was his best in front of goal, the England international scoring 20 goals and assisting 20 others.

As such, reports over several months claim United have him top of their transfer shortlist. Boss Ole Gunnar Solskjaer wants another winger as he continues his Old Trafford rebuild.

However, United are reportedly at odds with Dortmund over Sancho’s price tag. The German side want at least £100million for the winger, with the Red Devils holding out for less.