Jadon Sancho, Manchester United and a press contorting themselves to make it happen... 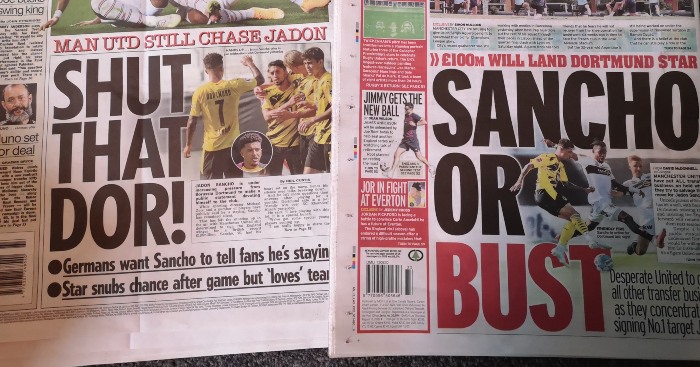 Silence is olden
We don’t want to keep kicking Neil Custis. We really don’t. But this is a sh*t-show of a Sun back-page story…

‘JADON SANCHO is under increasing pressure from Borussia Dortmund to make a public statement devoting himself to the club.

‘While sporting director Michael Zorc and a number of players have publicly said he is staying, Sancho has remained silent.’

…on the day after Sancho actually spoke publicly about playing for Borussia Dortmund (“I love playing with this lot. It’s a special bunch.”). He ‘remained silent’ while speaking? That is quite the trick.

‘Dortmund have appointed an agent to speak with United and have rejected an offer of £70m rising to £110m based on achievements.’

Rejected? You literally told us this on August 4:

They didn’t ‘force’ them to do anything, did they? Because Borussia Dortmund are not Crewe Alexandra and they do not have to sell for anything less than they actually want for a valuable player. Which is something that seems to escape those who believe that all clubs should bow before the might of Manchester United.

And here is Custis continuing to peddle this line…

‘The player’s representatives have also demanded more out of United, who were offering £220,000-a-week – Sancho is thought to be looking for nearer £250,000-a-week. United are also uncomfortable with the representatives’ demands in terms of a cut from the deal.’

Even though reports elsewhere suggest that United actually expected Sancho to take a wage cut. And that is something The Sun themselves are happy to repeat in their own search for clicks:

Penny for the thoughts of Neil Custis. Or indeed his former colleague and current Manchester United PR guru Neil Ashton.

Two can play that game
But the Manchester United PR machine is really churning in the Evening Standard, with James Robson telling us this:

‘Borussia Dortmund’s determination to keep Jadon Sancho in the news only strengthens the belief at Manchester United that they want to sell the England international.

‘While Ole Gunnar Solskjaer shut down attempts at the start of the week to get him to speak out about his primary transfer target, his club have only been too happy to make the saga public.

‘First sporting director Michael Zorc declared the deal dead, despite United continuing to negotiate with Sancho’s agent Emeka Obasi at the instruction of the Germans.’

So the declaration from Dortmund sporting director Michael Zorc that the deal is dead is actually being read as a sign that Dortmund want to sell? That really is quite the contortion.

‘That was followed by Dortmund players openly discussing the 20-year-old interviews, before the player himself was put in front of the cameras on Wednesday.’

Ah, that interview when he said that he “loves” playing with Dortmund certainly did open the door to a transfer. As did all those teammates who have declared themselves happy that he is staying at Dortmund. This is quite the game that the German club is playing.

And there is absolutely no sense of irony that Borussia Dortmund’s ‘determination to keep Jadon Sancho in the news’ is being reported by a press being briefed by Manchester United themselves.

Priority boarding
The Daily Mirror tell us on their back page that ‘MANCHESTER UNITED have put ALL transfer business on hold while they try to salvage their move for Jadon Sancho’. There go dastardly Borussia Dortmund again, trying to keep Jadon Sancho in the news.

But of course that sort of inactivity is no kind of fun so the Mirror website ignore their Manchester man to bring is this headline:

‘Manchester United are prioritising Ajax star Donny van de Beek ahead of Jack Grealish, according to the Evening Standard.

‘Van de Beek has been one of Ajax’s stars during the last few seasons and was expected to complete a move to Real Madrid last summer.

‘However he has reportedly now emerged as a top target for United as they seek to alter their transfer options this summer.’

There is no link to the Evening Standard, so we are forced to look for the story ourselves. Presumably there we will find Van De Beek being referred to as Manchester United’s ‘priority’.

We found this from five days ago:

‘Grealish to United looks a move long in the making, but the fact that Villa avoided relegation means the financial pressure of selling their talisman has been lifted – and that means the price could be a big issue.

‘Ajax’s Donny van de Beek would likely be a cheaper alternative, and United have watched the Netherlands international – also scouted by Real Madrid – in the past.’

And this from three days ago:

‘There is no alternative to Fernandes at No10, which is why a move for Jack Grealish makes sense, but he will have to come at a significantly cheaper price than Aston Villa’s valuation of £70million.

‘Donny van de Beek could be a more viable option.’

And from this you reach a headline of Donny van de Beek being a ‘priority’? And that’s even before we address the small matter of that back page from the Mirror’s actual Manchester United correspondent.

The Greal deal
Talking of PR, Jack Grealish’s agents have done an excellent job in the Daily Mirror, but we had to chuckle when we reached these paragraphs, bizarrely only included in the newspaper:

‘The future of former Spurs boss Mauricio Pochettino could also be an important element in Grealish’s destiny.

‘Pochettino unsuccessfully tried to sign Grealish for Tottenham in 2018 and is a long-standing suitor.

‘The Argentinian boss was recently linked with Roma and should he end up at United or even Real Madrid, a move for Grealish becomes more likely.’

Does the clutching of straws have a particular sound?

A ‘football’ headline for our times
‘Chelsea star Werner and girlfriend Julia save £10 each with ‘Eat Out To Help Out’ at posh Mayfair restaurant Novikov’ – The Sun.

Recommended reading of the day
Rory Smith on that PSG win