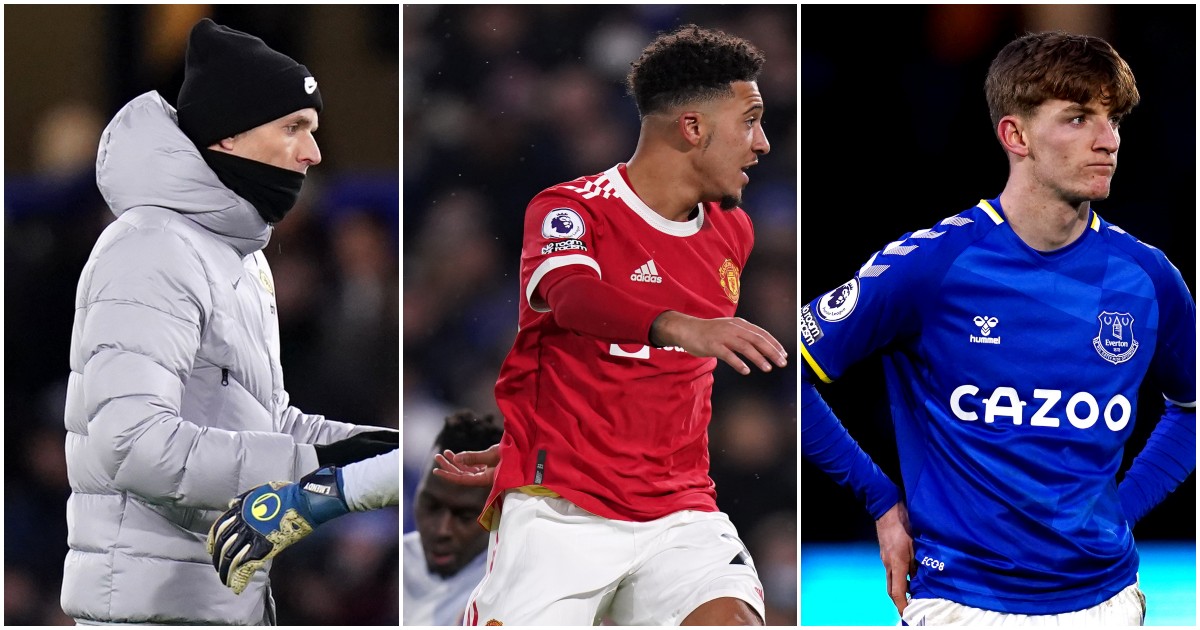 Jadon Sancho tops the winners list while Rafa Benitez is in big trouble at Everton.

Jadon Sancho
Sancho has represented one of the season’s peculiarities. He is the player Ole Gunnar Solskjaer chased for two years, only to then sideline, seemingly either lacking a plan of how to use him or binning it after Cristiano Ronaldo rejoined. In contrast, Michael Carrick has prioritised Sancho. He is the only attacker to start both of the caretaker’s games in charge and he has scored in both. And if his goal at Stamford Bridge was assisted by Jorginho and came after an anonymous first-half showing, it nevertheless displayed his counter-attacking threat. Sancho and Manchester United should never have looked a mismatch. Now they may not anymore.

James Maddison
It has been a slow-burner of a season for the overtaken, overlooked English creator, but it seems as though Maddison has finally acquired some momentum. After a goal against Legia Warsaw came another and two assists against Watford. Brendan Rodgers branded him an “inspiration” and for much of the campaign, Maddison has offered too little of that. He has been both cause and symptom of Leicester’s ever-changing formations and search for a formula. It may be too early to say Rodgers has found a solution now but, with Maddison and Jamie Vardy teaming up profitably again, it felt more like the Leicester who got back-to-back fifth-place finishes.

Diogo Jota
While Jurgen Klopp was able to reflect on a “perfect signing”, it is worth remembering that Liverpool probably would have got Timo Werner but for a Covid crunch on their finances. They improvised a Plan B, which might have been a recipe for failure, and if Jota had seemed bought as a back-up to Roberto Firmino, Sadio Mane and Mohamed Salah, he has instead proved a wonderful alternative. Firmino’s absence has scarcely mattered as Jota has scored three goals over the course of back-to-back 4-0 league wins.

While Werner has found goals elusive, Jota’s importance can be measured in the frequency with which he has struck – every 123 minutes in the Premier League last season, every 120 this season – but also when. Liverpool were outstanding against Southampton, but comfortable wins are fashioned by players who make the breakthrough. Jota has got the first goal in four Liverpool victories already this season. If Saturday’s brace came from a combined total of about eight yards, it showed his predatory streak. Klopp said he arrived with the technical and physical skills and the ability to learn Liverpool’s tactical demands quickly: buying Jota looks a masterstroke now, but fewer thought so at the time.

Arsene Wenger’s Arsenal (sort of)
In the week that Mikel Arteta said he would like to get Arsene Wenger involved again at Arsenal, there was something reminiscent of the second half of the Frenchman’s reign. Beating Newcastle was the sort of stylish home win against lesser opponents, garnished by glorious goals, that Arsenal long specialised in. That the goals came from two of the next generation produced a Wenger-esque feel that better times lay ahead.

Bukayo Saka’s opener was the kind of wonderful team goal that evoked Wengerball, the consequence of 16 passes. Gabriel Martinelli’s volley had just a hint of Robin van Persie to it. The scorers are contemporaries who have come to feel different: Saka the talisman, Martinelli, after just two league starts this season, possibly a case of arrested development. But that, too, was often the case with Wenger’s proteges. Some realised their potential, others did not. But when they score such goals, anything can feel possible.

Steven Gerrard
These are early days but Gerrard is showing a sure touch with his decision-making. Two of Villa’s four goals under him have been assisted by substitutes. One of them, Ashley Young, was promoted to the starting XI at Crystal Palace on Saturday, hit the bar and set up Matt Targett’s goal. In turn, Targett was a player who could have been dropped after he ended Dean Smith’s reign in wretched form; instead, he has formed part of a more resilient rearguard under Gerrard. And when attack-minded central midfielders score spectacular goals, as John McGinn did at Selhurst Park, it can offer comparisons with Villa’s new manager.

Rafa Benitez
“Some people only see the final score,” said Benitez after defeat at Brentford, which appeared a particularly curious remark for an essentially pragmatic manager to make. Results have often defined the Spaniard. But for one indelibly associated with Liverpool to go into a Merseyside derby without a win in eight games, with a solitary point from the last 21 available and having just lost to Brentford means Benitez, whose past renders him an easy scapegoat, has to hope attention is not concentrated on the results. The fans’ boos at the final whistle suggested it was, though a dismal performance could equally have formed the grounds for their discontent. The underlying problems predate Benitez: it is an indictment of a club who have spent half a billion on players under Farhad Moshiri that, in the absence of Dominic Calvert-Lewin and Richarlison, their front four consisted of Anthony Gordon (free), Andros Townsend (free), Salomon Rondon (free) and Alex Iwobi (£35 million, but a waste of it). But the fact that Iwobi has scored Everton’s goal of the month, because it is their only goal of the month, indicates how sterile they have become. And while some of the players are constants in underachievement, Benitez may be the new face of it.

Thomas Tuchel
The clever can sometimes look too clever for their own good. Tuchel’s intelligence tends to be apparent on the many occasions he gets it spectacularly right, sometimes by eschewing the obvious. After the rare setbacks, however, there is a temptation to wonder why he didn’t opt for the more conventional choices. Chelsea’s defenders have proved prolific this season but perhaps Tuchel erred by putting a stronger forward line on the bench – in Romelu Lukaku, Mason Mount, Kai Havertz and Christian Pulisic – than the starting XI against Manchester United, in Timo Werner, Hakim Ziyech and Callum Hudson-Odoi. Certainly Hudson-Odoi’s selection was a reward for recent form and had either of the wingers scored when they had chances in the first three minutes, he would have been richly vindicated. Werner’s second-half miss was sadly unsurprising and perhaps Tuchel did not deem Lukaku fit to start. Yet in a game when Chelsea were already without Ben Chilwell, N’Golo Kante and Mateo Kovacic, it seemed they fielded half their second-choice team; possession and pressure produced too little invention and too few goals. Maybe that stemmed from the team sheet.

Cristiano Ronaldo
Ronaldo never came on for Carrick during his first spell at Old Trafford. He did in his second, albeit in a different respect. Yet the fact he was demoted felt damning. Carrick has proved no respecter of reputations and benched his former team-mate against the league leaders; it was a slight on the record goalscorer ever but an indication his goalscoring habit cannot always compensate for his shortcomings. United did not press as high as Carrick planned when deploying Bruno Fernandes as the Portuguese in the middle of a front three, but picking him was a sign he tried to. And when the godfather of gegenpressing Ralf Rangnick takes over, perhaps Ronaldo will be confined to cameos more often.

Newcastle
A third of a season gone with no win. The last time Newcastle took three points in a match, Portugal were the reigning champions of Europe. Defeat at Arsenal was far from Newcastle’s worst result or performance but with every week the possibility grows that Mike Ashley has banked £300million for what will soon be a Championship outfit. Newcastle’s back-to-back home games against Norwich and Burnley take on colossal proportions if the world’s richest club are not to be cast adrift before they can spend a penny.

Ralph Hasenhuttl
It makes this job so much easier when managers in effect nominate themselves for a place among the losers. Hasenhuttl’s verdict on his decision to change to a 3-4-3 formation at Anfield? “My mistake,” said the Austrian. “We wanted to surprise them a little bit and we surprised ourselves.” Leaving players newly installed as wing-backs as the only Southampton player on either flank backfired for the first two goals; in each case, Liverpool worked a two-on-one situation on the flank, leading to a low cross. Hasenhuttl contrived to give Andy Robertson the freedom of Anfield and he duly exploited it. The half-time removal of his third centre-back and third striker were an admission he got it wrong even before his post-match mea culpa.

Neal Maupay
Seven days earlier, a downbeat Graham Potter had reacted to defeat at Aston Villa by saying that Brighton’s inability to score could not just be attributed to his decision to bench Maupay. Which, inadvertently, the striker demonstrated on his recall. Three glaring misses – the first, ballooned over the bar, may even rank in the top five misses of Maupay’s Albion career – spared Leeds a loss. They were a reason why Brighton mustered a divisional high of 14 shots off target in a game as they compiled their season’s best expected goals total of 1.89, all without scoring. After that terrific start of four wins in five suggested Albion had discovered more of a clinical, ruthless edge, they have reverted to being last season’s Brighton and Maupay has reverted to being last season’s Maupay; winless in eight, with several where they could have triumphed with a surer touch in front of goal. This, it feels, are what Brighton are, draw specialists who have hit the wall because they can’t hit the target. And, in different ways, that reflects badly on Potter and Maupay.

Junior Firpo
Some substitutions are acts of mercy. Marcelo Bielsa can be the tactics obsessive but he also demonstrated his sympathetic side by removing Firpo at the break at Brighton. His immediate opponent – and Leeds’ man-marking makes the term still more pertinent – Tariq Lamptey had already created five chances by then. The ultra-versatile Stuart Dallas fared rather better in the second half just as last season, when Leeds lacked a specialist left-back and Dallas the now departed Gjanni Alioski had a job-share in a position neither would call his favourite, they actually performed better in the position than the £13 million buy from Barcelona has. Firpo has had a wretched start to his United career, albeit interrupted by injury, and it began inauspiciously when Leeds conceded four goals in the 45 minutes he played at Old Trafford. In theory, a clean sheet at Brighton should reflect well on a defender. Even a brief glimpse of his performance, however, showed it came in spite of him, not because.

Burnley and Tottenham
Perhaps a postponement did neither any favours. Tottenham missed the chance to face Burnley when their best centre-back and central midfielder, James Tarkowski and Ashley Westwood, were both suspended, and each will presumably be available for the rearranged game. Antonio Conte’s team face the challenge of fitting another fixture into a schedule that could be crowded a host of Europa Conference League matches. Burnley, meanwhile, looked about to face Spurs when they felt fragile, after defeat to NS Mura, were potentially exhausted and certainly are not fully attuned to Conte’s methods. Each, for different reasons, looked to be facing a weakened team and could encounter altogether stronger opponents when they eventually do play.

Tottenham fans
For Londoners, Burnley is a long way to go for a game that does take place, let alone one that doesn’t. For the Tottenham fan who came from Dallas, even London is a long way to go. Calling the game off was neither the first nor the worst example of the supporters seeming an afterthought but they seemed to suffer the most. Managers Sean Dyche and Conte supported referee Peter Bankes’ decision to postpone the match amid the Lancashire snow (that, by the way, stopped around the time for the kick-off that never happened); fans could be forgiven if they did not.