"It's important for United fans to know that he still wants to go to Manchester United." 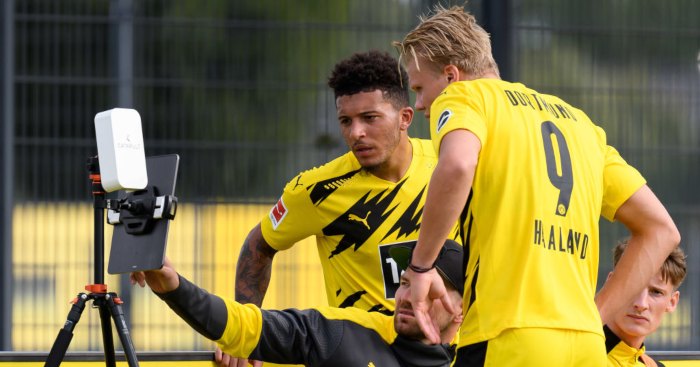 Jadon Sancho is still keen on moving to Man Utd this summer but the Red Devils must increase their offer, according to Bild journalist Christian Falk.

Sancho has been outlined as a major target at Old Trafford thanks to his performances over the past three seasons for Borussia Dortmund. The England winger scored 17 goals and added 16 assists in the 2019-20 Bundesliga.

Man Utd see him as an ideal addition to their squad, but Dortmund are standing firm. The Bundesliga club have publicly stated that their deadline to sell Sancho has passed – but reports continue to circulate suggesting Man Utd will test their resolve.

MAILBOX: Why is Van de Beek joining United instead of waiting at Ajax?

Falk told The Beautiful Game Podcast: “It’s important for United fans to know that he still wants to go to Manchester United.

“It’s just a question of money, if they pay €120million I think it’s a crazy amount of money during this time. I know Ed Woodward gets plenty of pressure from the fans, perhaps he has to pay it.

“I think that many people didn’t know that also Sancho signed a contract secretly which is one year more. For Dortmund there is no need to sell him now, they get the price next year also.

“If United buy him next year, it’s okay for Dortmund. Time is running for Ed [Woodward].”

Falk added: “Dortmund knows there is quite a promise, if a club bring the price and pay the €120million he can leave. He’s already agreed to United so there are not any other clubs in for him.

“Of course it’s always a risk to wait one year more because you know what is happening with Manchester City. I know also that Bayern Munich wanted to get Sancho when he was going to Dortmund, Sancho said no.”