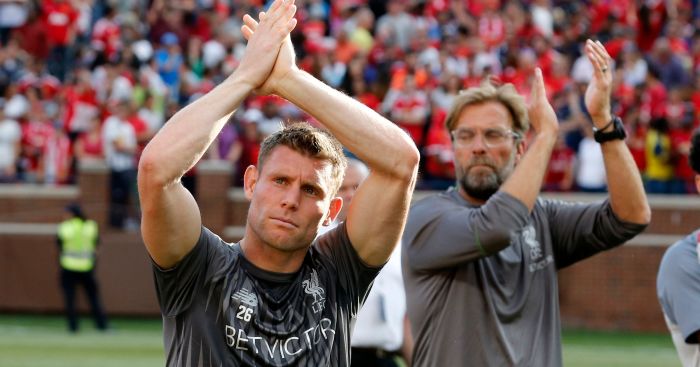 “The hope of English football,” laughed Jurgen Klopp as he was passed by last men running James Milner and Adam Lallana during a gruelling lactate test on the opening day of pre-season at Liverpool in July. New signings Fabinho and Naby Keita had long since dropped out, humbled by men of 30 and 32 who ran lap after lap as the club measured their aerobic endurance seven weeks after the end of a long season. Milner would eventually stop running and emerge the winner…just as Klopp had predicted as soon as he saw the former Leeds cross country champion ease through his first laps.

“The body is definitely holding up,” said Milner after he started the opening game of the season and excelled in a 4-0 win over West Ham. Three games later, the body is not just holding up but thriving; while Fabinho is yet to play a competitive minute in a Liverpool shirt and even Keita was sidelined for a Leicester clash that required discipline and energy, Milner has played on. And on. And on. Almost £100m has been spent on new central midfielders but still James Philip Milner is Klopp’s first choice.

“I don’t want to judge his career but it feels like it’s the best moment of his career,” said Klopp last month, and it is difficult to argue. Is it possible to peak at 32? Is it possible to play over 500 club games for 14 different permanent managers and then find your best form under your 15th? It certainly feels like Klopp is the manager Milner has waited his whole career to serve. And Milner is surely the man Klopp did not even know he needed. He started the German’s first Liverpool game against Tottenham almost three years ago and he will start his 160th against the same opposition on Saturday. He is almost certain to be the only survivor.

“Some players can play until 36, 37, even 38, and because of his physical abilities I am pretty sure Milly is one of them, if he is lucky with injuries. The end is not to see, and his desire to improve is exceptional,” says his manager, and it is the final six words that stand out. Even at 32 – two years after he deemed himself surplus to England requirements – he is still striving to reach new heights. Somehow, despite Liverpool’s summer spending and despite his own advancing years, his place is now more assured than ever. Two years ago he was Liverpool’s reluctant left-back; a year ago he was Liverpool’s reluctant substitute; right now, he looks undroppable, a beneficiary both of his own ridiculous work ethic and the meritocracy at Anfield.

“It’s typical James as I know him as a player and as a person,” says his former Aston Villa teammate and friend Stephen Warnock. “He gives everything he’s got to anything he does, whether that’s learning to play golf, learning a language…he’s 100% all in or he won’t bother. His performances on the football field are putting everyone to shame because he’s arguably getting better with age.”

There’s no argument there at all, Stephen. The part-time winger who looked like he was surplus to Klopp’s requirements almost three years ago, had to learn a new trade to stay relevant two years ago and looked like a soldier without a posting in the autumn of last year, is now keeping almost £100m of signings on the bench. As one fan wrote this week,  it is ‘hard to overstate just how good Milner has been so far’. Even after forcing his way back into the starting line-up in time to almost win the Champions League, nobody – except perhaps Milner himself – expected him to find yet another bloody (minded) gear.

Unfortunately, he is not the hope for English football for this is no country for old men. But that simply leaves more quality, energy and typical Yorkshire stubbornness for Liverpool, who are running the opening laps of their own gruelling endurance test.