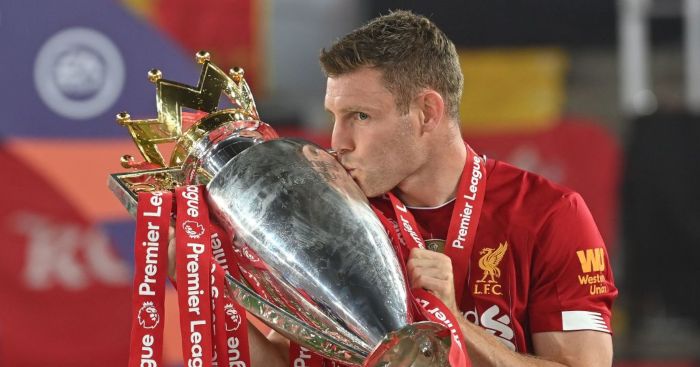 A 5-3 win over Chelsea was the ideal warm-up to the trophy presentation party which followed at Anfield, with injured captain Jordan Henderson finally get his hands on the one piece of silverware which has been missing for 30 years.

Liverpool effectively had the title sewn up in March before the coronavirus lockdown and head into the final weekend with an 18-point gap to rivals Manchester City.

Georginio Wijnaldum was one of several Liverpool players capturing the moment as Henderson lifted the trophy as part of the celebrations at Anfield.

And the Dutchman’s Instagram Live video filmed Milner – who has also played for Leeds United and Manchester City – having a dig at the Red Devils.

Milner was heard saying: “It’s the first time I ever wanted a red ribbon. It’s always been United before. F*cking w*nkers!”

Meanwhile, Virgil Van Dijk, captaining the team in the absence of Henderson, believes the mindset which has developed in the Liverpool dressing room means there is every chance they will push on again.

“We always find a way to win, we’ve been doing it all season,” the Holland international told Sky Sports.

“We had big results – Aston Villa away and Wolves away – those kind of moments where we just dig deep, find a way and got the result that we needed.

“That’s the least that the Liverpool fans want to see from us and that’s what we all want from ourselves, too.”