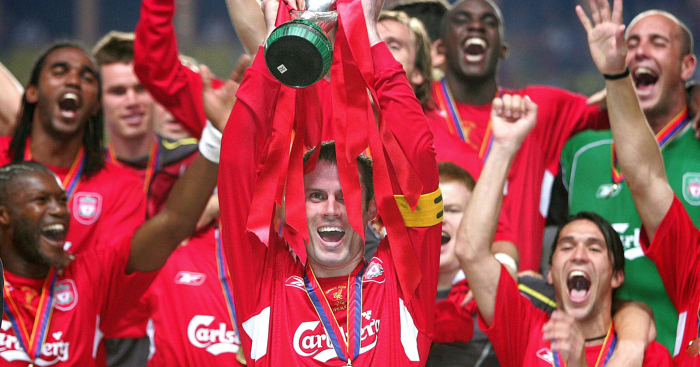 Liverpool were 3-0 down to AC Milan when Hamann was introduced at half-time for the injured Steve Finnan in the final 15 years ago.

The Reds embarked on one of the most remarkable comebacks in football history thereafter, with Hamann scoring in the subsequent shootout victory despite suffering a broken foot in extra-time.

Carragher feels his part is often underplayed, particularly after suffering the ignominy of being left out of the starting line-up.

“Rafa would try things in training and move players about before naming the team an hour and a half before the game but in Istanbul, he told Stevie the night before he was playing central midfield,” he told The Athletic.

“Didi Hamann didn’t know that he was getting left out. This was the biggest game of my life. Didi had played in the World Cup final, of course. I’m not sure my reaction would have been as calm as his. He was able to get himself in the right frame of mind to influence the game later on but I doubt whether I could have done the same.

“People say, ‘You’ve got to think of the team’ but it’s easy saying that. Footballers are humans, after all. If you’re expecting to play in any final and you get told you’re on the bench, it would be unusual not to be disappointed. If it happened in the Champions League final, you’d think your world has ended.

“You’ve got to give Didi massive credit for what he did.”

Hamann himself said that he “only found out I wasn’t starting” just over an hour before kick-off.

“In most of the Champions League games, we played with Stevie either on the right or as the second forward to give him more freedom,” he added.

“It was tough to take. I was disappointed but I had to put that to the back of my mind and support the lads.

“I knew what Rafa wanted to do. Harry [Kewell] hadn’t played an awful lot but we knew what he was capable of. Whenever a manager leaves you out, the answer is simple – he thinks he’s got a better chance of winning without you.”