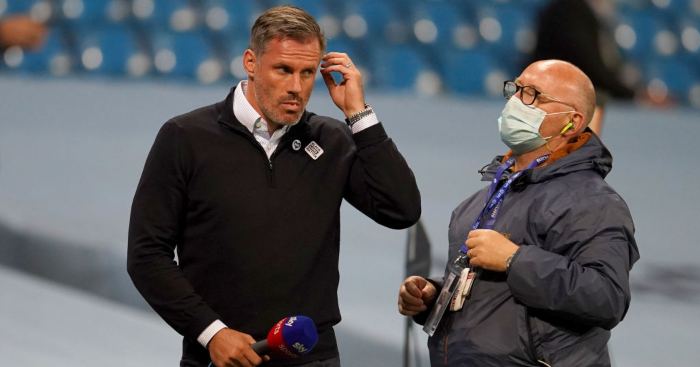 Sky Sports pundits Jamie Carragher and Gary Neville were very critical of Arsenal defender David Luiz after his errors contributed to their 3-0 loss at Manchester City on Wednesday.

Luiz had a calamitous outing after coming on as a first-half substitute, allowing Raheem Sterling to fire home moments before the interval, after which the Brazilian saw red for tugging down Riyad Mahrez in the box.

Kevin De Bruyne slotted home the 51st-minute spot-kick and substitute Phil Foden scored in stoppage-time on a night where goal celebrations were muted, with the players gathering for fist pumps but little else.

The 33-year-old came out to apologise after the match but Carragher reckons it could be too late to save his career at Arsenal.

“It’s happened so often before with him,” at half-time Carragher told Sky Sports.

“Concentration… maybe he thought it was easy to deal with when it came in. I know Kevin De Bruyne puts a good ball in. Maybe it’s come off the turf and it’s added an extra bit of pace. But it’s happened so often it’s no surprise why he’s on the bench.

“As I said before the game, I don’t think there’s any future for David Luiz at Arsenal next season. That probably puts paid to that as well.”

Speaking at full-time, Carragher continued: “Whether you like David Luiz or not, the sad thing is I don’t think we’ll see him in the Premier League ever again, and he does provide us with entertainment, whatever you think.

“I don’t see how Mikel Arteta, after that performance, can put him back in under any circumstances, really. Certainly if they are out of the running for the Champions League. The mistakes he’s made tonight… put a kid in [instead]. I know they’ve got injury problems.

“I think that’s the last we’ll see. There’s no way he’s getting a contract. I think that’s possibly the last time we’ll see David Luiz in the Premier League. It’s unbelievable in some ways that he’s kidded so many people in football, he’s actually gone for £50 million, £60 million in transfer fees now.”

Speaking immediately after second-half red card, Neville said: “I have no words really, I’ve said everything I’ve got to say. He never learns, he’s so rash.”