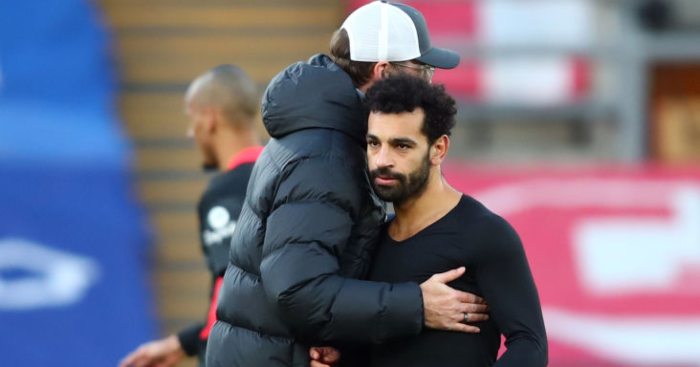 The Egyptian told journalists last week that he was “very disappointed” that Jurgen Klopp chose to make Trent Alexander-Arnold captain instead of him for their Champions League clash with Midtjylland.

Salah has scored 110 goals in 173 appearances in all competitions for Liverpool since joining the club from Roma in 2017.

The 28-year-old has 13 goals in 13 Premier League appearances this season, including the Reds’ final two in their 7-0 victory over Crystal Palace last week.

Carragher wrote in the Daily Telegraph: “Salah’s recent interview feeds that idea his career comes first. His comments about being upset not to be made captain in a dead rubber against Midtjylland underlined it. They were odd. I – like most fans – did not think he should be playing in an inconsequential game, never mind be the skipper.

“The timing of the player initiating transfer stories is also strange. My view is it was a message to Liverpool’s owners to offer him a lucrative new deal.

“Seeing their players being courted by the La Liga clubs would have concerned Liverpool five years ago. Not now. I am not convinced Madrid and Barca can afford Salah. Investing well in excess of £125 million on a player who will turn 29 this summer is not good business.

“Liverpool are in a different place in 2020 to when Suarez, Javier Mascherano and Xabi Alonso moved from Anfield to Spain. They left for footballing reasons.

“No-one leaving Liverpool today can say they will improve their chances of winning trophies. Philippe Coutinho’s experience at the Nou Camp tells us that.

“Liverpool can dominate in England and Europe – or certainly challenge for the Premier League and Champions League – every season Klopp is in charge.

“Fitness permitting, Salah is guaranteed to score over 200 goals and continue to break records if he stays on Merseyside for his prime years.”