Home Liverpool Carra: What made Arsenal ‘best’; who ‘underwhelmed’ Liverpool 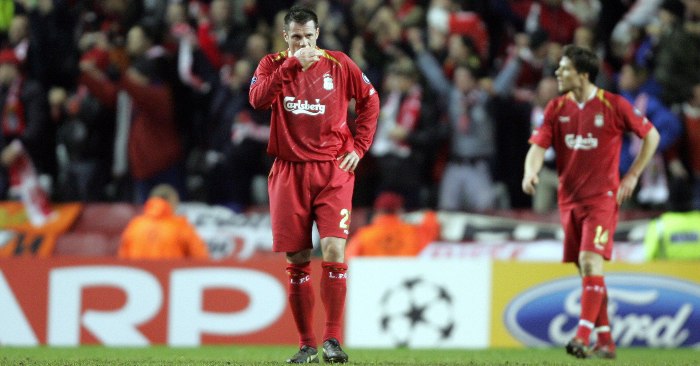 Jamie Carragher has explained what made Arsenal “the best we played against” at Liverpool.

After Ryan Giggs named the Gunners as the most difficult side Manchester United faced throughout his entire career, Carragher backed a different Arsenal side as Liverpool’s toughest opponent.

While Giggs rated the Arsenal side of the late 1990s highly, Carragher feels the team that “played with so much pace” after the turn of the millennium was best.

The Liverpool legend “always felt a bit underwhelmed” by slower Italian sides but found dealing with Thierry Henry and that lightning Arsenal side a much sterner test.

“To be honest, Juventus didn’t cause us huge problems,” he told The Athletic.

“Yes, we were under pressure in the second half at Anfield especially but it wasn’t a tie where I thought we were out of our depth, even though we had players missing and they were at full strength.

“It was the same against Roma and Inter Milan when they were champions of Italy. I believed that we were able to beat them because of the intensity of our game compared to theirs.

“That’s why I think Arsenal were the best we played against because they played with so much pace, it doesn’t give you time to think. With Italian teams, I felt like I was in the right position.”