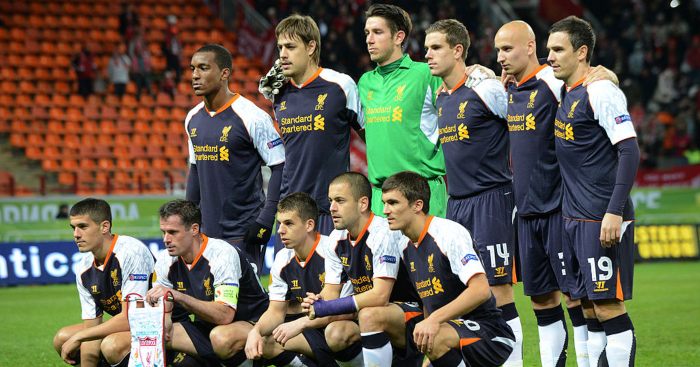 Sky Sports pundit Jamie Carragher has selected the worst Liverpool kit he ever played in while talking to Wolves captain Conor Coady about his career.

Coady made his full debut for Liverpool against Anzhi Makhachkala in the Europa League back in 2012, where the Reds went down 1-0 on the night to a team including Samuel Eto’o.

Carragher played with Coady against Anzhi, while the likes of Joe Cole, Stewart Downing and Jordan Henderson also started for Liverpool.

On how much Carragher helped his career, Coady told Geoff Shreeves on Sky Sports: “He was fantastic, he was someone I looked up to growing up and to play in the same team as him, it was a tough night, and to have him in behind me was brilliant – the way he talked, well shouted shouted more screaming balls!

“But you need that, you need someone pulling you into position as I was playing central midfield that night.”

Describing the purple, white and orange Warrior third kit they played in that night, Carragher said: “I think it was possibly the worst kit I have ever played in!”