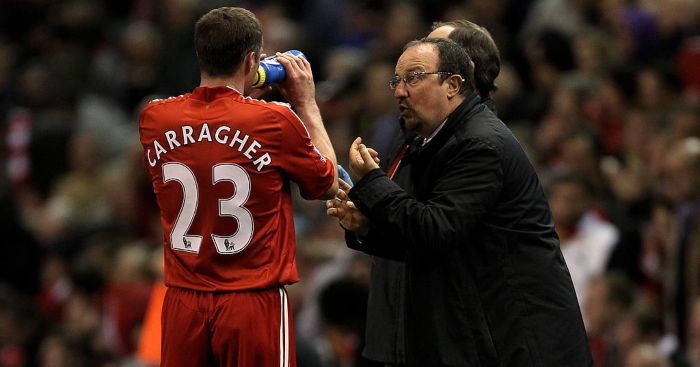 In 2009, Liverpool were pipped to the Premier League title by the Red Devils, who won the division by four points despite losing two more matches than Benitez’s side.

Benitez had already won the Champions League with the Reds in 2005 but domestic dominance eluded him before he left Anfield in 2010.

When asked where Benitez ranks amongst the greatest Liverpool managers, Carragher told Sky Sports: “For Liverpool it’s very difficult, they’ve got such great history, anyone who’s won a league title may go above Rafa in that situation.

“When you think of Joe Fagan and Bill Shankly underneath him [on a list of top win percentage as Liverpool managers since 1959], they’d obviously be right near the top.

“But in terms of managers that just missed out on the league title, you’d have to put him top of that list in some ways. With the Champions League and the team he created. I know a lot is made of Liverpool last season and rightly so losing one game and not winning the league, which is unbelievable.

“But we had a season where we only lost two and never won the league to Gary’s United side. And I think the difference that stopped Rafa winning the league was Ronaldo to be honest. Both teams were matched really well but they had probably the best player in the world at that time or just behind Messi.

“And that was the difference really and that was tough for our team and Rafa Benitez but sometimes as a manager you need to be in the right place at the right time. It’s not just about your team and who you buy but what the opposition is.

“You’re coming up against a great Manchester United team, Alex Ferguson, one of the greatest managers of all time as well, so it wasn’t easy. So I think Rafa did a great job in difficult circumstances at times.”