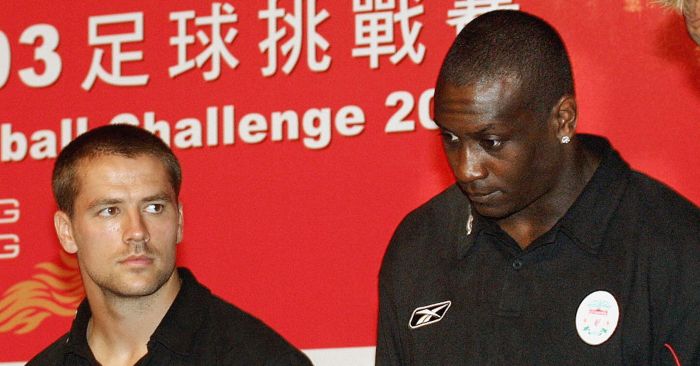 Jamie Carragher has teased former Liverpool teammate Emile Heskey about how he kept him out of the England U16 side.

Carragher and Heskey were teammates for four years at Liverpool from the time he became their most expensive player ever in 2000 to his departure shortly before Rafa Benitez’s appointment as manager.

The pair also played together for England, breaking into international football at a similar age, along with an emerging Michael Owen.

While Owen and Heskey would form a fearsome partnership at club and international level thereafter, Carragher actually played alongside the diminutive striker at the 1994 U16 Euros before eventually becoming a defender.

Asked whether Owen was his best teammate, Heskey told Sky Sports: “He definitely was.

“The thing is we started playing together at England U18s and it just clicked. You get that chemistry with someone, that telepathy. One of the first games that we played was against France, and Gerard Houllier was the manager. It went from there with the national team and with Liverpool.”

Carragher then intervened, asking why Heskey and Owen were not partnered together for England’s Under-16 side.

“It’s because of you, Carra!” he replied. “Shall I tell the story?

“It’s funny because I never went to Lilleshall or anything like that so I ended up having a trial and playing in the Euros. But I was on the bench to a superb centre-forward who was great at holding up the ball and playing between the lines: Jamie Carragher.”

His former Liverpool teammate then reminded him that it was “James Carragher” at the time.