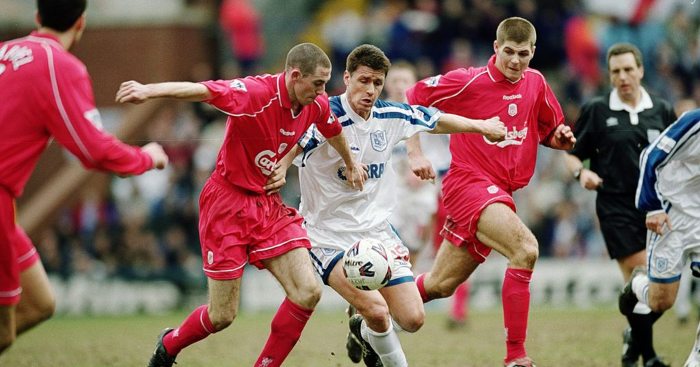 Jamie Redknapp had to convince Gerard Houllier that Steven Gerrard was a “different class” with the former Liverpool boss initially preferring the look of Stephen Wright.

Gerrard and Wright came through the Liverpool academy together before their career paths eventually went completely different ways with Wright leaving the Reds in 2002 to join Premier League side Sunderland.

Houllier eventually promoted Gerrard to play for Liverpool’s first team but Redknapp claims that Houllier had higher hopes for Wright after the pair were invited to train with the seniors.

MEDIAWATCH: Liverpool to win the title at QPR? It’s AN idea…

Speaking on The Lockdown Tactics podcast, Redknapp recalled the training session where Houllier thought Wright was “the one”: “I’ve got the ball, passed to Stevie, hoping he would give me it back and I could ping it out to the left winger, or something.

“But he took the ball in and on the half-turn he just hit this pass, straight through the air and into someone’s feet. And I thought ‘wow, this kid can play’. Just two minutes later, he’s smashed into Paul Ince, and then he is driving past people.

“Gerard Houllier came up to me at the end and asked what I thought of the right-back? I said ‘right-back? What about the kid in midfield? He’s unbelievable. He’s in a different class, the best I’ve seen in years. He is a winner’.

“I said ‘If you can’t see that then you don’t know football’.”