Home All The News Redknapp: One ‘greedy’ Man Utd man could frustrate Rashford 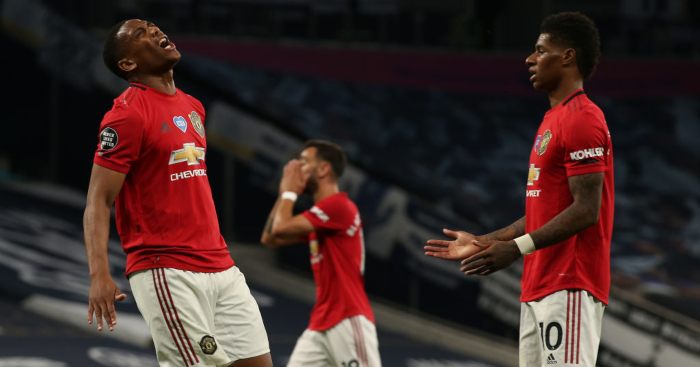 Jamie Redknapp thinks Marcus Rashford and other Man Utd forwards could get frustrated by Bruno Fernandes but he would urge any young midfielder “to study” the Portugal international.

Fernandes was one of the Red Devils’ better performers in their 1-1 draw against Tottenham on Friday night with the midfielder slotting away the equaliser from the penalty spot.

The former Sporting Lisbon man has scored four goals and provided his team-mates with four assists in the ten matches since his January arrival at Man Utd and Redknapp has been waxing lyrical about the 25-year-old.

Premier League winners and losers is back!

“My advice to any young, aspiring midfielders out there would be to study Manchester United’s Bruno Fernandes,” Redknapp told the Daily Mail.

“Look at how he strikes the ball when shooting from distance. Look at how he creates such a dip and swerve that it makes his shots more difficult to stop. It is not conventional, and it is not a fluke. It is done by design in order to bamboozle the goalkeeper.

“The instant Fernandes gets the ball, he does not delay and he does not look sideways, either. He instead looks at how he can create an immediate goalscoring opportunity or, even better, shoot himself.

“It might frustrate your forwards on game day. Maybe there will be times when Marcus Rashford says he was in a better position and should have been played in. Maybe Fernandes will be accused of greediness on the odd occasion.

“But it will be worth it for his goal return. In 2018-19, Fernandes’ last full season for Sporting Lisbon, he got 32 goals and 18 assists in 53 games. That is what Ole Gunnar Solskjaer wants from him now. United want those numbers, and they want to see a fruitful partnership form with Paul Pogba.”