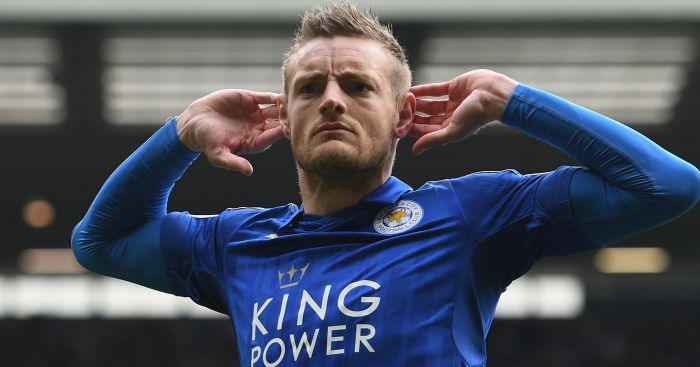 Jamie Vardy’s first match of the decade didn’t take place until January 23, 2010. Stocksbridge Park Steels’ Bracken Moor ground sits in the foothills of the Pennines, where the bitter wind rushes into the gaps in your layers of clothing like new rain filling the cracks of the scorched earth. So goes the local joke: If it is raining in town, it’s probably snowing at Bracken Moor. In January 2010, town got the snow too.

FC United of Manchester were Stocksbridge’s visitors, a club built out of resentment and anger but also in the hope of creating something pure. At Bracken Moor, where supporters stand in the bar with a pint and survey the brown bracken of the mountainside, and stand by the touchline to experience the cacophony of gruff South Yorkshire swears, you certainly experience football’s realness. Bracken Moor’s official name is the Look Local Stadium. It has never looked anything else.

Vardy’s Stocksbridge drew 1-1 with FCUM, despite being reduced to ten men midway through the second half when trailing 1-0. A bumper crowd of 761 watched Vardy toil but fail to score, booked for a frustrated rash tackle. Many of them huddled from the cold in the stand that now bears his name. One of those was Notts County’s talent identification officer, but Vardy did not bear mention in his account of the match. Another one slips through the net. Another synaptic link is missed.

Of course, even Vardy could not have possibly predicted his rise. How could he, when the next morning the alarm would sound for him to get up and work a 12-hour shift at the Trulife factory, helping to manufacture medical splints and crutches? How could he, when there were younger men than him in the England national team and he was getting paid £30 a game to play?

We enjoy the journey of a non-league player making it big because it reinforces the dream principle – nothing is impossible if you want it hard enough. Reality is depressingly different: social mobility is largely a myth, with economic and social inequalities often suffocating potential. Posturing the idea that anyone can succeed if they just work hard enough becomes counterproductive, absolving inequality of necessary scrutiny.

Vardy had dreamt of being a professional footballer through his childhood and then been released by Sheffield Wednesday at the age of 15. College, a job, his mates, love life and money then become the priorities; football is marginalised to the fringes. We’re told to never stop dreaming, but life often moves too fast for dreams.

He’s always been Class. An unreal goal from Jamie Vardy back in 2009 for Stocksbridge. pic.twitter.com/IfZHS53EZT

A cultural Hollwoodification has created certain expectations of how a rise like Vardy’s might play out. There’s the lightbulb moment, when the magnitude of opportunity clicks and maps out a path to the top. There’s the Rocky montage, where we see Vardy sacrifice everything for punishing training runs through the Pennines. There’s the cliff-edge setback that pushes the schmaltzy narrative to the point of disaster, only for our protagonist to claw their way back to safety.

The truth is often a little more prosaic, if no less unlikely: Vardy just started scoring goals and found that he couldn’t stop and never wanted to. “I didn’t ever sit down and plan all of this,” Vardy once said. “It’s just happened how it has happened.”

There is a story told by Leicester City owner Aiyawatt Srivaddhanaprabha about how Vardy initially struggled after joining the club. His fitness was lacking, and Aiyawatt had received reports from coaches that Vardy was turning up drunk to training. When the then vice-chairman met with his striker and asked if there were any personal problems he wished to discuss, the answer surprised him: “He said he didn’t know what to do with his life now. He’d never earned such a large amount of money.”

For professional footballers who rise through academies, success usually comes incrementally. Even those who burst onto the scene at major clubs have been emotionally and psychologically prepared for what might follow. There is now a conveyor belt of advice and support.

For Vardy it’s different: he had learned to cope with life outside of the dream. The rapidity at which his situation changed left him without the tools to deal with it. Everyone assumes that you make and then immediately live the happy ever after, but for Vardy life initially became less rather than more straightforward.

It can be hard to process such remarkable promotion because it is so difficult to explain it away as anything other that good fortune – the psychological complexity of the ‘Why me?’ dilemma. In 2010/11, when Vardy scored 24 goals for Halifax, a striker named Ross Hannah scored 35 times for Matlock Town. Hannah was eight months older than Vardy, was also released Sheffield Wednesday at 15 and also played at Bracken Moor for Stocksbridge. He scored 89 goals in two seasons for Matlock.

Two days before turning 25, Hannah signed his first professional contract with Bradford City. A manager was sacked, opportunities were limited, goals didn’t flow; Hannah is now at Gainsborough Trinity, back in the Northern Premier League. Vardy’s story was different, but it’s easy to wonder ‘Where did it all go right?’. Vardy did not choose to be scouted or signed or selected or feted or hated. As he says, this just happened.

Vardy’s game was forged in amateur football; that is still conspicuous in the relative refinement and homogeneity of the Premier League. He actively avoids putting on muscle because he believes it slows him down but the power still exists, like a greyhound whose owner’s livelihood depends on fractions of seconds and grams. Vardy is also the great grifter of English football, delighting in riling opponents to gain a psychological advantage. Anyone who has pitched themselves against a gnarled, snarling Sunday League central defender can identify.

Like Wayne Rooney in his pomp, Vardy possesses a football brain and a technical skill that belies his persona and image; athlete meets aesthete. The chip against Tottenham in 2017, the goal against Liverpool in 2016, the volley against West Brom in 2018; each fabulous finish taken at least half a second before the goalkeeper is expecting it. That is the sign of an intelligent forward. Vardy has a natural composure even when performing highly technical actions. The greatest talents are those that seem to even catch the beholder off guard.

This isn’t a pure story; it would be unforgivable to pretend otherwise. When at Stocksbridge in 2007 Vardy was convicted of affray after a fight outside a nightclub (he says he was defending a friend with hearing difficulties who was being mocked for his disability), and in 2015 Vardy was filmed by a member of the public telling a man of Asian origin to “walk on Jap” in a casino after believing he was looking at his cards. Vardy’s personal apology soon followed, supplemented by an excuse of ignorance caused by ill education. But Vardy knows these incidents stick to a reputation like glue.

Vardy’s rise and reign can basically be pitched as a battle of him vs the world. Everything behind the psychology that drives his game is fuelled by proving to himself and everyone else that he belongs in a place where he never expected to be. Even the famous chant that celebrates him reinforces his everyman difference: “Vardy’s having a party. Bring your vodka and your charlie.” He is different to the rest, and that difference defines him.

The tremendous record against the biggest teams? An extra desire to prove his worth against the elite. The taunting of opposition supporters? Proof that Vardy uses their abuse as fuel to drive him. The “all me, all me” celebration after breaking the consecutive goal record? An auto-response to the realisation that he had made it. The breakdown of relationship with his parents, who have still not seen their granddaughter? “It’s their loss. I’ve got a family I need to look after.”

It becomes both self-fulfilling and irreversible: The better Vardy plays, the thicker the protective wall he places around himself and his family. One of the usual results of rapid progress is a hardwired fear of returning to whence you came. Fear either builds or breaks you.

Perhaps Vardy’s greatest achievement is making this extreme individualism fit perfectly into the team ethic. His on-pitch personality is infectious. Choose a different elite striker with more grace but less demonstrable hunger, and Leicester’s title victory may not have been possible. Leicester City vs the elite, Jamie Vardy vs the world; glory through symbiosis.

Vardy began the decade as a footballing nobody. He will end it as a somebody, the sixth highest Premier League goalscorer of the last ten years. While the other high-profile stars of Leicester’s title-winning team needed to leave the club to sate their professional ambitions, Vardy rejected his big move.

Maybe that was recognition of Leicester’s faith in him and the integral role that faith played in his success. Maybe that was to repay those supporters who adore him like no other player in their lifetimes. Or maybe Vardy just came to the conclusion that there were no bridges left for him to cross. His dreams caught up with his life and surpassed it long ago. There’s no need to force it. It’ll just happen how it happens.