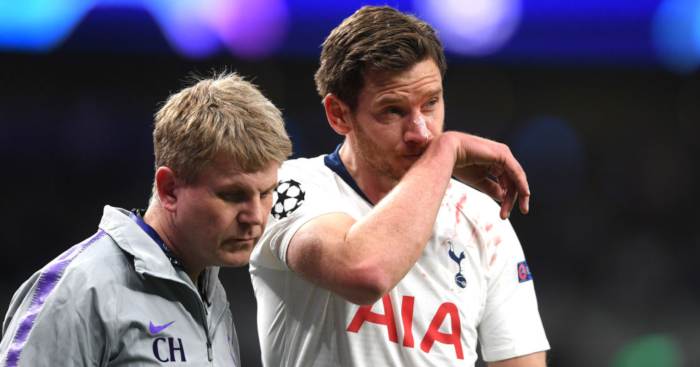 Jan Vertonghen has hinted for the first time he will leave Spurs when his contract expires.

The 33-year-old defender’s current deal expires in the summer, though there is still doubt about what will happen if the Premier League season extends beyond June 30.

Tottenham boss Jose Mourinho was keen for Vertonghen to stay, but suggested the defender’s agent was playing hardball over a fresh contract.

Vertonghen, who joined Spurs in 2012, has not ruled out staying in north London, but has suggested he would like to play in Italy or Spain and has said there have been “serious” offers for him.

“I want to sign with the right club. It could be Spurs, or another club,” he told Belgian TV channel Play Sports.

“I really want to continue at top level for a few more years and I would like to play European football next season.

“Since January, a number of clubs have come forward with serious proposals.”

“The Spanish and Italian leagues are the most obvious for the time being, but I will keep all options open.”

The Belgium defender, who has been in and out of the team this season, has revealed he finds himself in a stronger position because of the affect the coronavirus could have on the game.

He added: “I’m free, of course, and many clubs don’t have the money to do transfers. Transfer-free players like me are even more coveted in the coronavirus crisis.”

The Premier League are still working out a way to end the season, with some leagues around Europe beginning to accept defeat in their bid to complete the campaign.

A centralised camp to play all of the games in several weeks is just one suggestion which has been mooted, but Vertonghen says that would be “dramatic”.

“They will do everything to finish the competition and people are even considering quarantining the players, coaches and referees for five weeks,” he said.

“So a kind of mini-World Cup. That would be dramatic for a family man like me. But we players have little say about that. Money talks.”