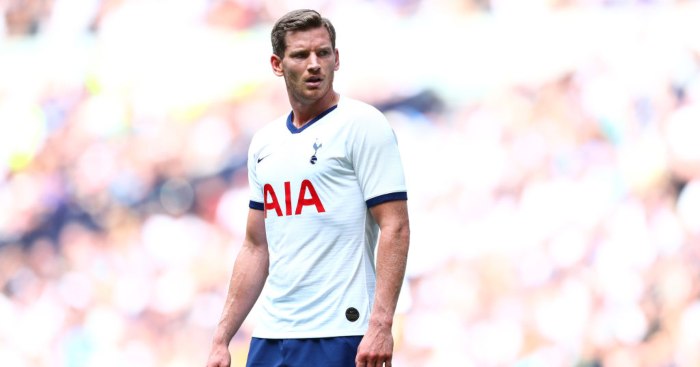 Jan Vertonghen could miss the end of the Premier League season with the Spurs defender unlikely to accept a contract extension, according to reports.

The 33-year-old defender’s current deal expires in the summer, though there is still doubt about what will happen with the Premier League season set to extend beyond June 30.

Tottenham boss Jose Mourinho was keen for Vertonghen to stay, but suggested the defender’s agent was playing hardball over a fresh contract.

Vertonghen, who joined Spurs in 2012, has not ruled out staying, but suggested back in April that he would like to play in Italy or Spain and has said there have been “serious” offers for him.

The Times claims that the Belgium international has attracted interest from Fiorentina after Spurs told him ‘that he will not be offered a deal for next season’.

The club have, however, offered him the same terms until the end of July if the defender is willing to extend his stay in north London for another month.

Het Nieuwsblad says that Vertonghen ‘hopes to sign a contract elsewhere and may want to avoid an injury to a potential employer’.

The Belgian newspaper adds that it is now ‘uncertain that he will sign’ for the extra month.