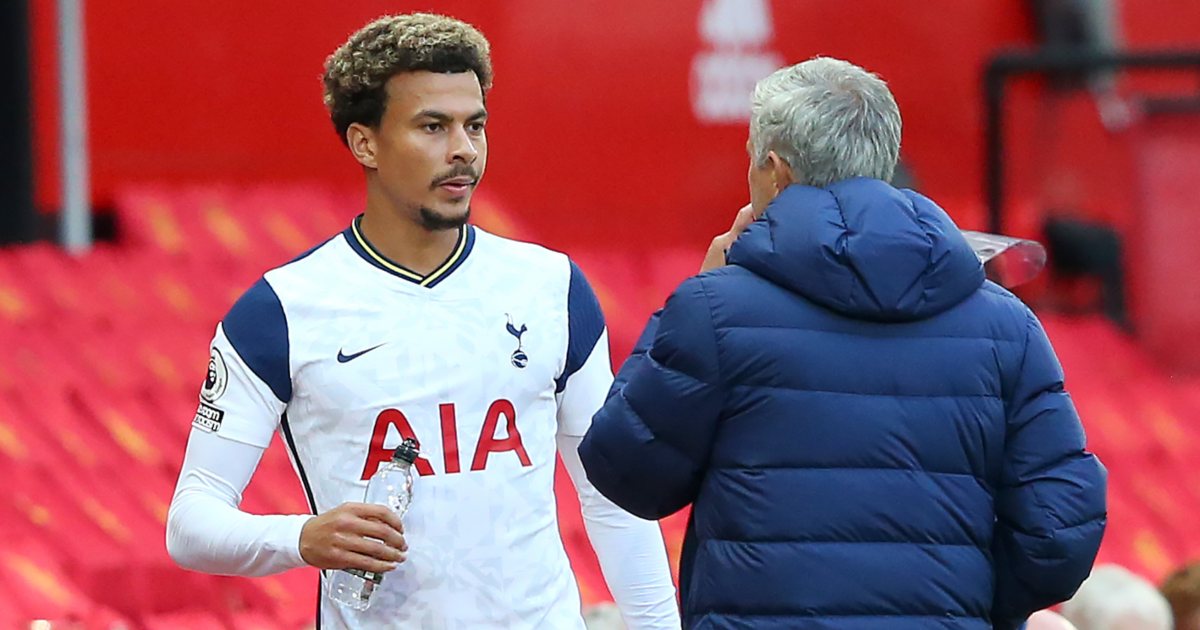 Jose Mourinho doesn’t want the toy but won’t let anyone else play with it either. Dele Alli is one of the biggest transfer window losers. Head here for the winners.

Dele Alli
There is a laboured analogy in there somewhere about the prodigal son wanting to return to the care of the only guardian that ever understood him, but being forced to live with his merciless stepparent instead. More than anything, Dele Alli needed Mauricio Pochettino’s brand of arm around the shoulder management, not the cold shoulder of Jose Mourinho.

It is, first and foremost, utter b*llocks that Tottenham felt they couldn’t let Alli go without a replacement. He has started a single Premier League game all season, and that was on the opening day when he was substituted at half-time. Since then, a drip feed of Europa League, FA Cup and League Cup minutes have kept his career on life support without ever providing the proper sustenance a 24-year-old footballer needs.

Quite what Tottenham insisted needed replacing before sanctioning the departure of Alli for a few months is a mystery. The circumstances of Gedson Fernandes were obviously different with his spell being a loan anyway, but it’s curious that Tottenham were happy to wave goodbye to a player that had been in three Premier League matchday squads this season, yet so reticent to lose one that has been in just seven.

Perhaps it is a case of the child not wanting a toy but also refusing to let anyone else play with it. Maybe Tottenham do have genuine plans to use Alli to help them end this run of poor performances without Harry Kane. Some have theorised that Daniel Levy simply wants to protect the short-term value of a player who could well outlast his manager. Time will tell why this decision was made.

But the shame is that behind the drama and the intrigue and the picking of sides and the quite dreadful commodification of footballers at a time when they are increasingly seen as numbers on a sheet instead of people, there was an individual that had his hand slapped back after reaching for their comfort blanket. Alli might have craved that move to PSG for the trophies or the change of scenery, but he most likely just sought the confidence boost from working for a manager that knows how he operates.

Many will point to the renaissance Tanguy Ndombele has experienced as a previous lost cause that persevered to find his place under Mourinho, but not all players fit neatly into that narrative box. Others will understandably focus on the stick and ignore the carrot. Every footballer doesn’t need to be cast into the shade first to see the light. Some require a different touch.

And that is not to say that Pochettino is softer or more lenient than Mourinho. He is an incredibly taxing coach who demands absolute commitment both mentally and physically. But he knew how to build players up just as well as he could tear them down. He saw them as individual characters and personalities that responded to things in different ways, not just young people who had to bend completely to a manager’s way of thinking and a style of play antithetical to what suits them best.

A move to PSG and a reunion with Pochettino would have boosted his morale more than anything. Instead, expect a few more months of conversations structured around how Alli needs to ‘fight’ for his place and ‘prove’ himself worthy to a manager who couldn’t seem less interested.

West Ham
One of the most frustrating but harmless tendencies of football fanbases is to pretend their experience is any different to the rest. The persecution complex is ingrained into all supporters. Everyone believes their team always loses to the club that is woefully out of form, or that only this side could ever concede that particular goal. ‘Typical [insert club name here],’ they mourn when even the most mundane and common fate befalls them. It is a quirk of the human psyche, a sort of collective martyrdom for effect.

But that really is typical West Ham. Only they could generate vast positivity with a fine start to the Premier League season under an accomplished manager and a dedicated squad, only to end the month with supporters renewing their calls for the board to step down because of a bizarre insistence on relying on Michail Antonio’s hamstrings to carry them through to May without any problems. Genuinely, it is difficult to think of another club that would do this.

It just feels like a massive wasted opportunity. West Ham are fifth and their only Premier League defeats since September have come against Liverpool, Manchester United and Chelsea. They have engineered a phenomenal position for themselves against all odds but instead of building on and solidifying those foundations, they are resting on their laurels.

Perhaps it will work. Jesse Lingard is a shrewd addition and might ensure they regain momentum to qualify for Europe. Antonio might shoulder the burden with ease. Andriy Yarmolenko could step up if needed.

But West Ham have yet again left things to chance when they did not need to. While most clubs identified replacements before offloading the players they wanted to replace, the Hammers sold Sebastien Haller for half the fee he joined for on January 8 and spent the subsequent three weeks leading a wild goose chase that was as predictable as it was lamentable. Typical.

Sean Dyche
The problem with the word ‘takeover’ in a football context is that the mind automatically drifts to signings and warchests. One hopes that Sean Dyche was never under the pretence that ALK Capital’s £200m purchase of Burnley would grant him an overdue January windfall, but it is a shame all the same.

Yet Burnley find themselves in the same situation as ever, safe in the knowledge that Dyche would probably have guided Derby 2007/08 to 16th with five goals in 38 games. It is a vicious cycle of success: if he was not as good at his job then the likelihood of him being given at least one new signing would be greater.

As it is, the extended contracts of Johann Berg Gudmundsson, Kevin Long, Matt Lowton and Erik Pieters can be presented as four at once. Hopefully there is more to come in the summer because few managers have earned that financial trust quite as much. Plus Robbie Brady will need a hand next time he plays Callum Hudson-Odoi.

Leicester
How unsurprising that a) Ainsley Maitland-Niles preferred the choice of Leicester, and b) Arsenal quite liked the look of West Brom instead. With Southampton seemingly ruled out on the basis that they planned to use the player as a full-back, options were limited to a club battling for the Champions League and one fighting to stay out of the Championship.

It left Leicester trying to engineer an awkward three-way involving Watford and Newcastle, who weren’t quite as up for it as the Foxes had hoped. Nathaniel Chalobah, Matty Longstaff and Hamza Choudhury stayed put, leaving Brendan Rodgers with that same Wilfred Ndidi-shaped hole in his squad.

Would Maitland-Niles have addressed that? Or Chalobah? Probably not. They are different profiles of players. But after only making three signings in the summer, Leicester might have needed that little boost of one extra face to push them through to the end of the season. That niggling feeling that they could miss out on the top four with a late collapse after being so well-placed lingers.

Brandon Williams
The fall has been as sharp as the rise. Last January, Brandon Williams had broken into the Manchester United first team at left-back, was eating noses and even had the public backing of Sir Alex Ferguson behind him. Twelve months later, he has played six Premier League minutes all season, Luke Shaw is probably the club’s best player on current form and talk of Southampton, Newcastle and Bayer Leverkusen counted for nought by the end.

Ole Gunnar Solskjaer stated last week that Williams “will be ready when the chance comes” but with no League Cup minutes on offer, the FA Cup and Europa League at the stage where it matters too much to draft in reserves and the full-backs more established as starters than any other player at Old Trafford, it is more a case of if rather than when.

Manchester United’s non-supporting cast
“We don’t have any more players that we feel should be going. We need a strong squad,” Solskjaer added when discussing Williams. “It’s a relentless season. We go again on Tuesday. It is like the NBA, we are on the road all the time. We need everyone. The group is tight.”

Yet Manchester United have four players (Lee Grant, Sergio Romero, Phil Jones, Marcos Rojo) yet to play a single minute in any competition this season, six players who have started five games or fewer (Dean Henderson, Williams, Axel Tuanzebe, Daniel James, Juan Mata and Donny van de Beek), and a starting XI roughly four-fifths of which can be accurately predicted before each fixture because it so rarely properly rotates; those who drop out of the line-up tend to come off the bench at some point anyway.

That is not necessarily a criticism of Solskjaer. Manchester United are second and exceeding expectations currently. His management of this squad has paid dividends thus far. It is more a reflection of a team that struggles so bizarrely when it comes to selling players, even if Rojo, for example, is still likely to join a club outside Europe with a longer transfer window. Players should be easier to offload purely by virtue of having the club on their C.V., not more difficult.

Southampton
Takumi Minamino joining is chef’s kiss worthy but it speaks volumes that the two full-backs who started the Premier League defeat to Arsenal on January 26 were both loaned out six days later. That squad was threadbare in certain positions as it was. Ralph Hasenhuttl deserves better than nothing but an admittedly substantial upgrade on Shane Long.

Arsenal
Call it the dark lining to the silver cloud that was a necessary and well-managed thinning out of a bloated squad: Arsenal spent £95.1m on the three players whose contracts were terminated this month. The previous regime left quite the mess but at least a proper deep clean and fumigation has been carried out.