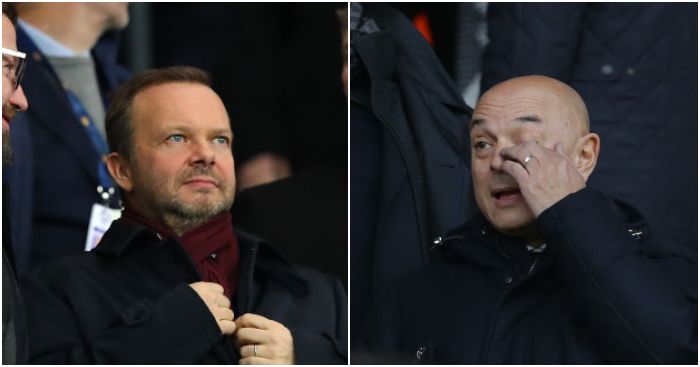 Everyone
That was terrible.

Daniel Levy (ii)
It’s remarkable how long it’s taking for Levy’s reputation to update itself. Tottenham have been in this position so many times before: mid-season, with clear objectives and obvious weaknesses, yet hamstrung by their own inertia.

In this window, Spurs needed at least one full-back, probably some cover at centre-half and – inarguably, without any ambiguity whatsoever – a regular source of goals. Instead, they’ve managed to sign a winger and perform a favour for Jorge Mendes with Gedson Fernandes.

There are positives to that haul, they’re covered in the Winners section, but seeing value in those players is quite different – and Jose Mourinho would presumably agree with this – to actually equipping the team in the right way.

It’s not quite Louis Saha and Ryan Nelsen, but it makes the rest of this season little more than a preparation for 2020/21. Tottenham have enough talent to be entertaining – Giovani Lo Celso is worth a ticket alone – but their structural issues make winning the FA Cup a pipe dream, the notion of significant progress through the Champions League laughable, and their chances of qualifying again almost non-existent.

The line which will be trotted out in defence, which has grown tired through overuse, will be that Harry Kane’s position at the club makes finding a back-up forward extremely difficult. But that’s a challenge that every other contending club seems able to cope with far better. And – damningly – this shoulder-shrugging bullshit and refusal to make even semi-reasonable offers for alternatives is exactly why, at just 26, Kane’s body is already breaking down.

Manchester United’s PR
The thing about PR – good PR, at least – is that it’s most effective when nobody realises that it’s happening; when it has an element of subterfuge, allowing silent, secret control of the newscycle.

Conversely, when it amounts to asking former colleagues to present a story with a particular slant and when the result of that is the communal mirth of the watching world, it hasn’t worked. And that’s particularly true when an entire episode fits neatly into the confines of the ‘can you write something like…’ meme.

Manchester United paid through the nose for Bruno Fernandes. Rightly so, perhaps. We’ll know in time. But this looks like a personal triumph for whomever was sitting opposite Woodward at the negotiating table at the moment and, as a result, United made themselves look ridiculous.

Mentions of Woodward have admittedly been scarce in the days after, he didn’t even appear in the club’s official statement, so they do at least know when to row back on a strategy. But this was a chastening first week for the Ashton Media Group.

The shame of it is that Fernandes is exactly the kind of player United need. In addition to quite a few more obviously, but completing that deal – the biggest of the window – probably spoke for itself. What the situation needed, in the sense of what would have been best for Woodward’s reputation, was for it just to be quietly concluded without the confected heroism being hoisted on him afterwards.

It made him and them look desperate, at a time when the conversation should have been about an overdue (and partial) solution to the side’s midfield issues.

Manchester City
That squad needed something new. The time for major overhauls definitely isn’t in January, that’s fair enough, but a common refrain this season has been that City’s domestic form has suffered because they’re so focused on winning the Champions League.

Which all sounds very credible, but are they really good enough? Players like Kevin de Bruyne, Raheem Sterling and Sergio Aguero give them a puncher’s chance, having Pep Guardiola in the technical area is also a tremendous help, but – on current form – they’ll be eliminated by the first good side they face.

Ultimately, they weren’t good enough last year and all the weaknesses which Tottenham were able to exploit over those two legs have worsened. The centre-back situation has deteriorated, Fernandinho is a year older and none of the full-back options inspire much confidence.

City would probably reason that it’s extremely difficult to strengthen midway through a European campaign, with elite players rarely available and most of them cup-tied, but some new blood might have at least enlivened this season, bred some new ideas, or awakened a team of players who can sometimes look bored of one another.

That’s very harsh, but City have set a standard of excellence which they haven’t been consistently meeting for a few months now. January was never going to cure that inconsistency, but it was a chance to do something other than just loan Angeliño to Leipzig.

Christian Eriksen
Really, was it worth it?

Inter Milan have certainly improved under Antonio Conte and they remain in Serie A title contention, but was this the new challenge that Eriksen envisaged when he burnt all of his Tottenham bridges last summer?

Most likely not. In time, maybe the perception will be different, but for now he seems just to have swapped one Tottenham for another. Inter’s fondness for calamity makes them Spurs’ obvious Italian counterpoint and, while he will earn a great deal more money (three times as much, apparently) in Milan, Eriksen now finds himself playing in an inferior league with a lesser standard of teammate.

Not exactly Real Madrid, is it?

Dougie Freedman and Crystal Palace
On Wednesday night, it sounded as if Freedman and Palace were on the verge of a triple coup. Nathan Ferguson, Jarrod Bowen and Yannick Carrasco were all probable or possible arrivals.

By Friday lunchtime, Bowen had chosen to go to West Ham instead, Carrasco had predictably decided to return to Atletico Madrid and Ferguson’s move was collapsing on account of a bad knee.

Lurking beneath the surface of this season has been the suggestion that Palace are built on sand. They aren’t scoring enough goals and, rather than defending particularly well, they’re over-reliant on the excellent Vincent Guiata. Whether that precarious balance holds remains to be seen, but – sorry, Cenk Tosun – it won’t be due to anything they’ve done over the past month. It’s been a wasted opportunity.

Should Freedman be criticised? That’s tough, because the club’s proposition isn’t naturally that strong and, obviously in relation to Atletico and most likely with West Ham, they’re operating at a significant disadvantage which would be difficult to overcome. That being said, Freedman’s record as a whole doesn’t bear much scrutiny and his successes since becoming sporting director in 2017 are rather thin on the ground. This month has been no different.

Chelsea
Hopefully they didn’t spend too much on lawyers’ fees in trying to get that transfer ban overturned.

Frank Lampard may prefer it this way, with the club remaining reliant on his use of young players. The fear was always that his early work would eventually count for nothing once the chance to reinvest presented itself but, so far, that hasn’t been the case.

In the long term, that’s good. On the basis of her record, keeping Marina Granovskaia away from the transfer market is probably a good move.

In the short term, though, it leaves their Champions League qualification hopes in the hands of Tammy Abraham, Mason Mount, Reece James and Fikayo Tomori. Eventually, the attrition of first-team football is going to take a physical toll if it hasn’t already, and Chelsea’s advantage over their chasers isn’t such that they could just afford to ignore that danger.

They should be fine. Neither Manchester United nor Tottenham are going to be good enough to catch them and, most likely, Wolves will be sufficiently distracted by the Europa League. Hopefully so, because if not this is going to look reckless come the summer. The club had plenty of time to plan for this window, they were presumably focused on it as far back as July and August (with the expectation of the ban being reduced), so to see them scrambling around for Dries Mertens on the final day was a bit unbecoming.