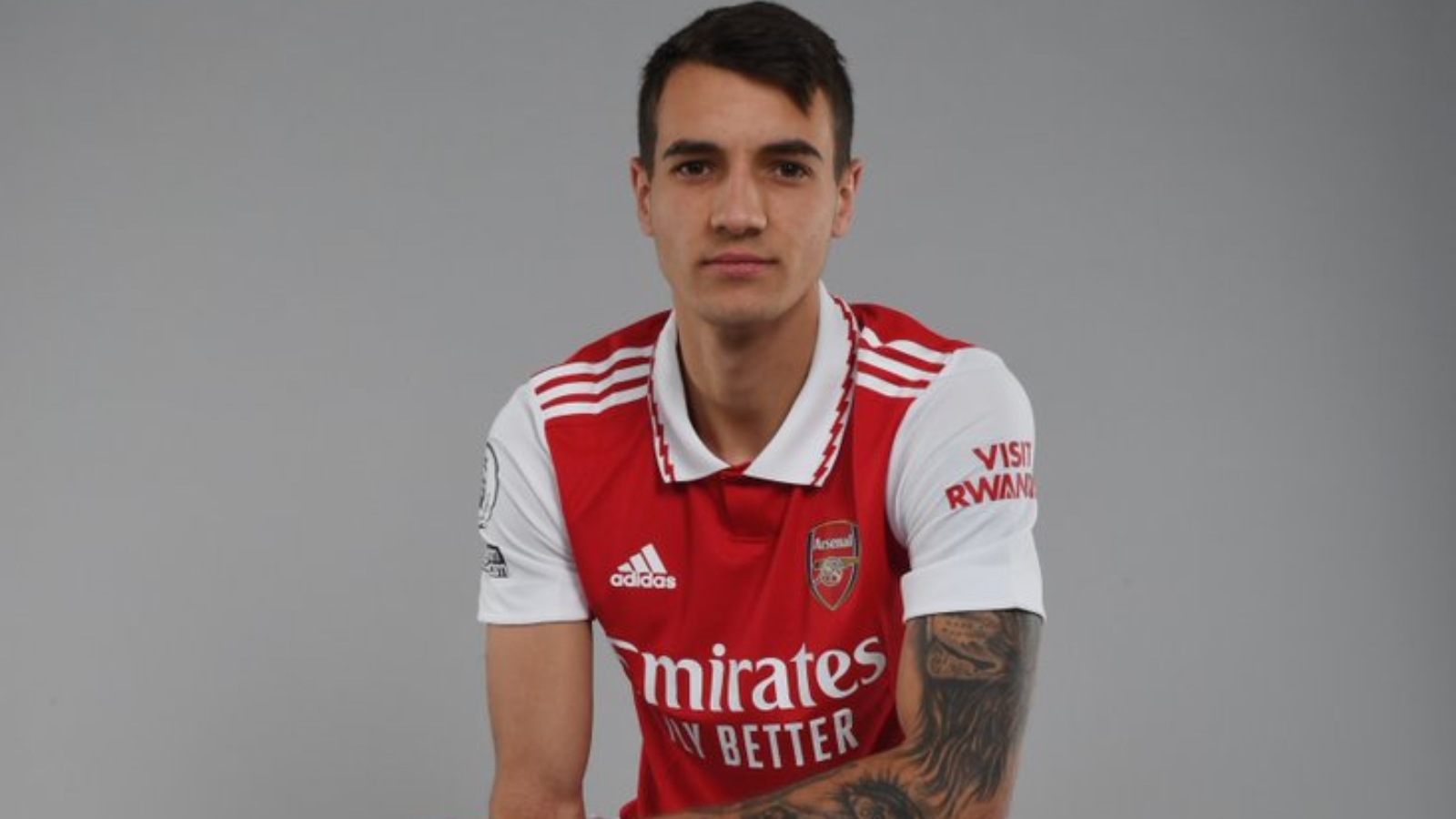 Chelsea have made six of the biggest signings of the January transfer window and take top spot from Liverpool with their Mykhaylo Mudryk move.

1) Mykhaylo Mudryk: Shakhtar Donetsk to Chelsea – £62m
You will read a lot about this being an £89m transfer but the truth is that Chelsea will only pay £89m if everything goes swimmingly; right now they will only pay £62m for the Ukrainian winger who – just a week before – we were repeatedly told only wanted to join Arsenal. He has signed an eight-and-a-half-year contract, which is officially a hell of a lot.

2) Cody Gakpo: PSV to Liverpool – £37.2m
Liverpool didn’t wait for the window to open before wrapping up a deal to sign Gakpo, apparently from under the noses of Manchester United, though the Red Devils’ subsequent pursuit of veteran loanee centre-forwards suggests they were never really serious about the Netherlands international. Gakpo is getting his feet under the table after making his debut against Wolves in the FA Cup but Liverpool fans need to hope the club haven’t blown the winter budget on another forward when they so obviously need a midfielder.

3) Benoit Badiashile: Monaco to Chelsea – £33m
It’s a notable fee, but the thing that jumps out about this deal is the length of contract. Badiashile committed to seven-and-a-half years at Stamford Bridge, which takes him to 2030. With Armando Broja penning six-year terms recently, it seems Todd Boehly is implementing new policy, which protects their assets but also allows them to spread amortisation more thinly to keep the FFP police happy.

4) Noni Madueke: PSV Eindhoven to Chelsea – £30.7m
The spending does not stop for the Blues, who have signed the England Under-21 winger for quite a few pounds. It’s a seven-and-a-half-year contract for reasons of FFP, obviously.

5) Georginio Rutter: Hoffenheim to Leeds – £24.8m
This could eventually be a club record fee for Leeds United, whose fans will be hoping that he is better than his starts suggest: Two goals in 15 Bundesliga games is not exactly screaming the kind of record that will keep Leeds in the Premier League and Jesse Marsch in a job.

6) Leandro Trossard: Brighton to Arsenal – £21m
The Belgian had made it pretty damned clear that he thought he was too good for Brighton but that doesn’t mean it’s not a fine signing for Arsenal, who are getting a Premier League-experienced attacker who can play in a variety of positions.

8) Andrey Santos: Vasco Da Gama to Chelsea – £18m
The third of Chelsea’s January signings is probably one for the future. Santos, an 18-year-old box-to-box midfielder, helped Vasco earn promotion from the Brazilian second division last season with eight goals in 33 appearances. He has also represented Brazil at Under-20 level.

9) Danilo: Palmeiras to Nottingham Forest – £17.8m
Long linked with Arsenal, it is somehow Nottingham Forest who have emerged with the signature of the 21-year-old Brazilian central midfielder. “I’m really happy to be fulfilling my dream of playing in the Premier League and playing for Nottingham Forest,” said Danilo. There are some excellent things happening at Forest.

10) Gerson: Marseille to Flamengo – £17.6m
Gerson made the return journey to Flamengo after leaving there for Marseille in 2021. He played 48 games for OM last season but has featured less frequently this term, prompting a deal that could see the French side get their money back if Flamengo become liable for most of the add-ons.

11) Jakub Kiwior: Spezia to Arsenal – £17.5m
The defender, who started all of Poland’s World Cup games, watched the win over Manchester United from the stands after undergoing his medical earlier in the day. So it’s back to the drawing board for Spezia boss Luca Gotti: “It is frustrating for a coach, as when you work to build them up, you then don’t get to enjoy the fruits of your labour, as they are sold and you press the reset button.”

12) Jhon Duran – Chicago Fire to Aston Villa – £14.75m
The 19-year-old Colombia striker left the Under-20 South American Championships to sign for Villa. But Unai Emery insists he will be eased in: “He has potential as a striker if he can develop like we are thinking he will do. We can’t give him the responsibility, as a 19-year-old, to play as a striker in the Premier League against the best teams in the world. He will need time.”

There was only one way to welcome @JhonDuran991 to Villa Park. 👀

13) Alex Moreno: Real Betis to Aston Villa – £13.3m
Like every other professional footballer, Moreno cam close to joining Nottingham Forest in the summer but he finally made his way to the Premier League after Unai Emery rocked up in Betis with a truck load of euros. The 29-year-old, who came through Barca’s academy, usually plays at left-back but is capable of doing a job in more advanced positions.

14) Victor Kristiansen – Copenhagen to Leicester City – £13.1m
This feels like something of a return to Leicester signings of old with the 20-year-old left-back arriving from Denmark. “It feels amazing,” Kristiansen told the club’s website. “It’s really exciting to be here.” The Foxes certainly need some help, particularly at left-back.

15) Danny Ings: Aston Villa to West Ham – £12m
Buying claret-and-blue enthusiast Ings for a goal or two that might keep West Ham up is possibly cheaper than sacking David Moyes and all his staff now. Hammers maths, that. Villa have already spent most of the Ings money on…

16) Carlos Alcaraz: Racing Club to Southampton – £12m
The consensus seems to be that Saints have pulled off something of a coup by landing the 20-year-old central midfielder, especially if they can keep his temperament stable. Inter Milan were keen on Alcaraz, as were Benfica, Porto and Wolves. Racing Club will be entitled to 15 per cent of whatever Saints sell the Argentine on for.

17) Max Wober: RB Salzburg to Leeds – £11m
It’s a well-trodden path between Salzburg and Leeds. Wober is the third player to make the move, following Rasmus Kristensen and Brenden Aaronson in reuniting with ex-Salzburg boss Jesse Marsch. For how long Marsch sticks around, though, seems far from certain.

18) David Datro Fofana Molde to Chelsea – £10.6m
Molde were happy to accept Chelsea’s money for the 20-year-old forward who scored 24 goals and registered 10 assists in 65 games for the Norwegians. But his first club, Abidjan City, wanted FIFA to intervene amid a row involving themselves, Molde, the player’s mother and an apparently unsigned consent form. FIFA weren’t interested, so Fofana signed with Chelsea until 2156 with the option of another decade.

19) Joao Felix: Atletico Madrid to Chelsea – £9.7m loan
Chelsea are well-stocked for forward players but half of them are in the treatment room, which has prompted the Blues to fork out almost £10million to borrow Felix. The Blues have no obligation or even an option to make iot a permanent arrangement. Indeed, Felix signed an extension to his Atletico contract before flying to London, with the Rojiblancos presumably hoping the Portugal star will catch the eye and generate a bidding war in the summer. Or he might return to Madrid and a different manager, with some reports suggesting Luis Enrique has been lined up to replace Diego Simeone.

20) Andreas Schjelderup: Nordsjaelland to Benfica – £8.9m
There was extensive interest from English clubs in the 18-year-old Norwegian winger but Benfica spotted a potential future profit and swooped for a player who has scored an impressive 10 goals in 17 games this season. Not daft, Benfica.

Read more: The full list of every Premier League signing and sale made in the January 2023 transfer window