Home F365 Says Will Japhet Tanganga be a Harry Winks or Harry Kane? 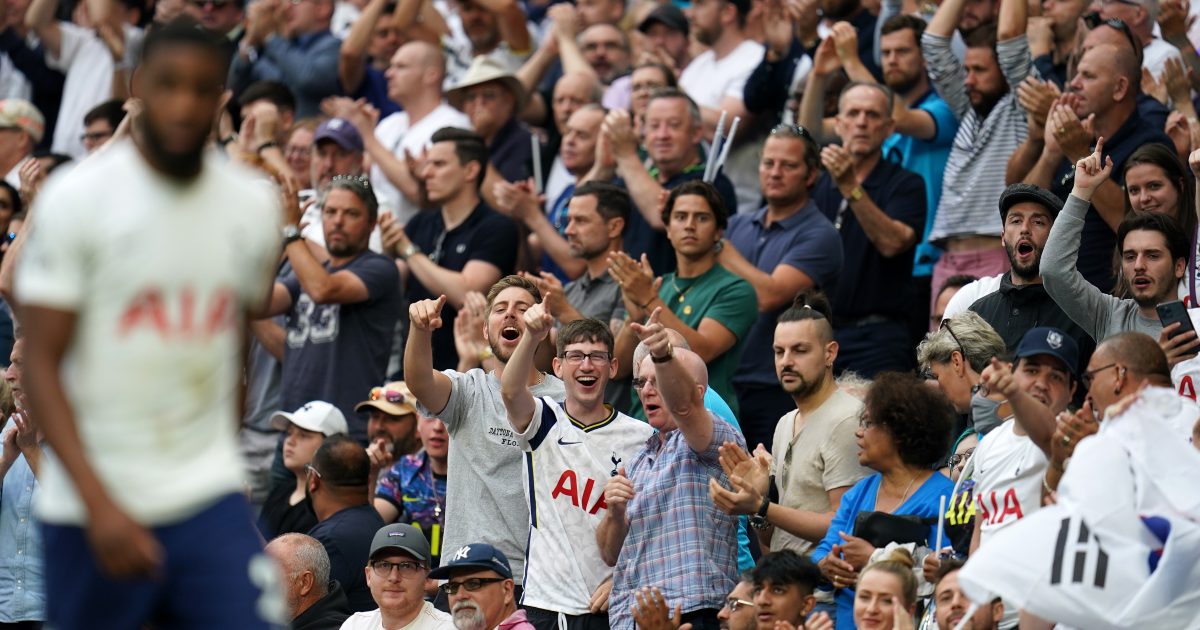 Will Japhet Tanganga reject Tottenham like Kane or be rejected like Winks? Football and loyalty are complicated.

The first weekend of the Premier League season was an unmitigated success. Some simple, effective changes infinitely improved the quality of real and video refereeing. There were brilliant goals, upsets, attacking football and enough talking points to keep any football fan occupied for the whole week until we go again. Undoubtedly the biggest difference though was the return of football fans and the obvious impact this had on the pitch. Just ask Arsenal and Aston Villa.

The return of fans illustrated how supporters interact with their team. Songs and chants are objectively funny but they do oddly motivate; Brentford players seemed to be inspired to believe that they are in fact the greatest team the world has ever seen. They can intimidate the opposition, with Arsenal characteristically ducking under expectations by playing like a s*** Tottenham Hotspur. They can be used to unfairly abuse officials, although Martin Atkinson seemed to revel in being public enemy number 2 (you’ll never beat Ashley, Martin) by giving West Ham the most controversial penalty of the weekend after teasing the fans with an erroneous decision.

Most songs and chants just organically happen, with fans trying to make as much noise as possible to gain a competitive advantage. But every now and again there are moments when you can visibly see a genuine connection between fans and players through the words of supporters. During Euro 2020 you could see England players emotionally react to the singing of ‘Sweet Caroline.’ A bond developed that we hadn’t seen with England and their supporters since the first release of ‘Three Lions’ and its adoption on the terraces. Just compare the heart-warming reaction to Bukayo Saka at rival grounds over the last couple of weeks with our complete disassociation with previous England teams.

A similar moment happened at the Tottenham Hotspur Stadium on Sunday. Japhet Tanganga had unexpectedly had one of those matches where everything had gone his way. He embodied everything good about Tottenham’s performance, everything the fans want to see from the players they support. When he was withdrawn in the 82nd minute, there was a chorus of ‘Japhet Tanganga, he’s one of our own’ that reverberated around the whole stadium and evoked memories of dreams we have all had at some stage of our lives. In his interview after the game, you could see and hear the emotion and feel the ‘chills’ he described through the television. It felt like the ultimate alliance between supporters and player, a mutual feeling of togetherness.

I have twice felt that connection between a Spurs player and supporters before – after the debut goal of Harry Winks against West Ham and the day Harry Kane destroyed Chelsea in a 5-3 victory. I can only liken it to the beginning of a relationship, when everything feels perfect, and you want that feeling to last forever. With Winks, it was love at first sight as he continued to do his best Xavi and Iniesta impression against Real Madrid and Barcelona. With Kane, it was a bit more of a slow burner with ‘not one of our own’ Roberto Soldado part of an awkward love triangle, although eventually he chivalrously stepped aside by only scoring penalties and trying really hard. In both instances, it seemed like the bond would last forever. We had fallen for them and they had fallen for us.

Sadly, for very different reasons, both relationships seem to have ended prematurely.

The stories of Kane and Winks this summer perfectly demonstrate how frail loyalty can be in football and how we, as supporters, expect to dictate how the relationship ends. It is seen as high treason that Kane would contemplate leaving the club that has brought him up, nurtured his talent, given him a platform to perform and rewarded him handsomely for his endeavours. It is impossible to fathom that he would take all that and throw it back in the face of the club that created him and the supporters that have idolised the local boy come good. It is particularly hard to fathom when it is so mis-managed. He is, after all, one of our own. If he dumps us for Man City, there can be no coming back. In the words of a very wise man that escapes my memory (probably Oscar Wilde), ‘this is gonna cost ya.’

So, what of Winks? This has been another mutually beneficial relationship. Tottenham gave Winks the same platform and he has worn the same badge with the same pride as any other local boy. He has shone on big nights in the Champions League and represented his country with great distinction. So, after a couple of bad seasons, what do Spurs fans want to happen to Winks? Judging by the standards we expect of Kane, surely we want to stay loyal to him and keep picking him until he reaches the same form he displayed when he was man of the match in a midfield duel against Luka Modric and Toni Kroos?

Even if he doesn’t hit those heights again, should we not support him through this tricky spell in his career and keep him around the squad as he clearly loves the club? Well, take one trip to a Tottenham message board and you will see that that scenario is highly unlikely to satisfy supporters. The fanbase has turned, and he can – as SpuDFan4Eva has so eloquently indicated – ‘f#ck off with Sissoko.’

This isn’t an attack on Spurs fans, it is just the natural thought process of a football fan. Even if it’s a graduate from the youth system, why would we want a player in our team that we don’t consider good enough? If Kane does stay, will we want him to just keep playing indefinitely? Of course not. When someone comes along that is a better option, we won’t want Kane to stay in the team to its detriment.

And that is the problem with the loyalty argument. There are exceptions to every rule, but all of us associated with football have to some degree got a one-eyed view. That is why you never hear managers coming out after games complaining about the decisions that have gone for their team, only against them. When you take a step back, it is difficult to blame Kane for wanting to play for a team with a far greater chance of tangible success. Blame him for signing that contract and handing the power to Daniel Levy absolutely, but loyalty and football is an extremely murky subject matter.

I expect the main counter-argument to this to be the stories of ‘one-club men’ and how they have retired with legendary status. Steven Gerrard, Paolo Maldini, Ryan Giggs, Paul Scholes; why would they have left? They were prominent players in teams that were consistently challenging and winning trophies. Mark Noble, Tony Hibbert, Gary Kelly, Leon Osman; all good players playing at the level that matched their abilities. Will Phil Foden be considered more loyal than Jack Grealish if he spends his whole career with Man City? Perhaps if he was playing in a team with Kevin Horlock and the Whitley brothers, but it would hardly be an incredible act of devotion to stay with this iteration of City.

If Harry Kane does leave this summer, of course there will be anger and he will initially be hated by a large percentage of Tottenham supporters. That is because we have committed ourselves to the relationship. There are exceptions, but those moments of perfect harmony generally happen between a local player and a fanbase that see a younger version of themselves in their shoes. They can (usually) understand why a player with no affiliation with the club may decide to move elsewhere, but for ‘one of their own’ not to share their devotion is far more difficult to take. Eventually, like any painful break-up, the wounds will heal. But it takes time.

Hopefully, Tanganga is able to enjoy this glorious moment and it stays with him forever. This is the honeymoon period. Because invariably one day he will either be doing a Kane to us, or we will be doing a Winks to him.