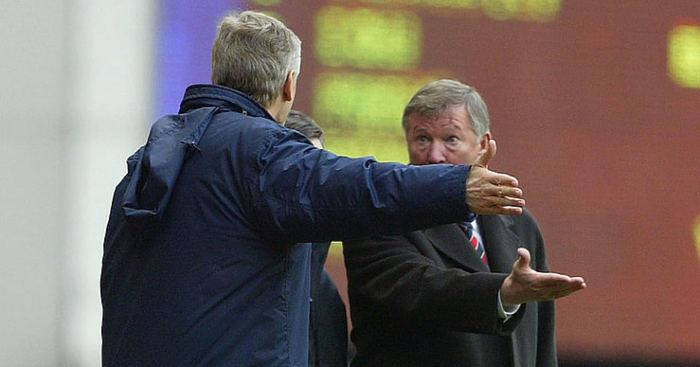 Jens Lehmann has recalled a time when Arsene Wenger and Sir Alex Ferguson “almost started to fight” in the tunnel after a match between Arsenal and Manchester United.

Wenger and Ferguson enjoyed a long rivalry, especially in the late nineties and early 2000s when Arsenal were competing for Premier League titles.

There were many brilliant matches between the two clubs and Lehmann has reminisced about a 0-0 draw in 2003 in which Ruud van Nistelrooy missed a penalty in the now infamous Battle of Old Trafford.

The draw saw Arsenal keep up their unbeaten run as ‘The Invincibles’ went the whole Premier League season without losing a match.

“He was having Alex Ferguson at a short distance like that [clenches fist].

“He grabbed him and each of them were very angry with each other and almost started to fight with each other. It wasn’t about me or the players it was more about the manager.

“I came in late and I remember that there were two crowds of people confront each other and I spilt some of my water onto them, accidentally of course.

“It was funny to watch, I wasn’t involved. You always expect me to be involved but I wasn’t in this situation.

“We were talking (on the Monday at the training ground) but we were waiting for fines to be handed out and of course to United.”