Home All The News Jermain Defoe: OBE is ‘proudest moment of my life’ 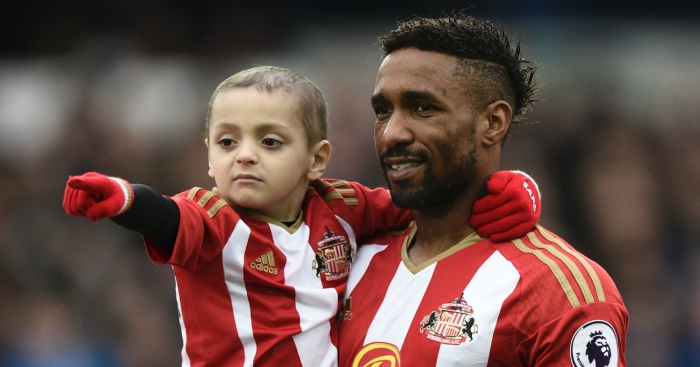 Jermain Defoe said he feels blessed to receive a royal honour, but described it as a time of mixed emotions following the death of his young friend Bradley Lowery.

Bournemouth striker Defoe, 35, said the six-year-old’s mother would be the first person he called to share the “special” news of the recognition for charitable work.

The England player and Bradley formed a strong bond, with the little boy repeatedly picked to be a mascot for his beloved Sunderland while he battled neuroblastoma.

With the OBE for services to the Jermain Defoe Foundation coming just under a year after Bradley’s death, the sporting star said he felt both pride and sadness.

He said: “It’s obviously mixed emotions because obviously standing here (is) one of the proudest moments of my life, but at the same time remembering all the hurt.

“I’ve got great memories of Bradley in my head but it wasn’t easy seeing someone that you love suffer like that, especially a young kid, where he didn’t really understand what was going on and you have to remain positive.”

The proudest moment of my life to be awarded an OBE. I‘m blessed to have received the honour, but it isn’t for me or about me. It’s for Bradley and those he loved. I’d trade it all for him to be back in our lives, forget the goals and awards, it’s the memories I’ll cherish…💙 pic.twitter.com/Dcxua0t7bC

Having found out the news of the honour over the phone from his mother while he holidayed in Dubai, Defoe said he was looking forward to telling Bradley’s mother, who lives in Blackhall, County Durham, and the rest of his family.

“I can’t wait to tell Gemma, I think she is the first person I am going to tell to be honest and I know she will be happy, she will be proud,” he said.

Defoe, who said he felt “blessed and humbled” to get the honour, described it as his biggest achievement to date.

“It’s at the top because I feel like this is something completely different,” he said.

“I am proud of it to be honest. It’s important to just give back and try and help others.”

Defoe’s foundation was launched in 2010 after a hurricane in St Lucia, the Caribbean island his grandparents came from.

He said the charity hopes to open a home for abused and vulnerable children there in the next few weeks and added that the foundation has now expanded to help children in Dominica and the UK.