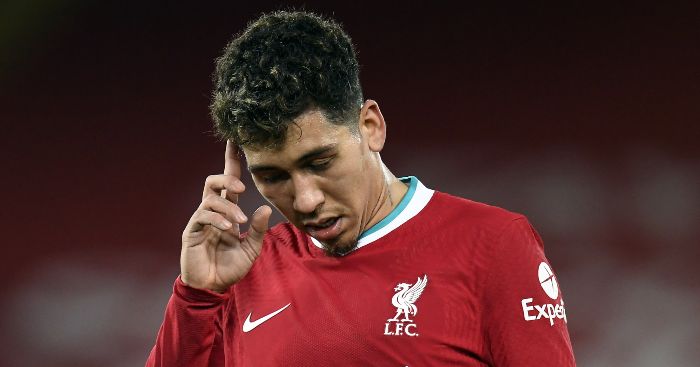 Jermaine Jenas thinks Liverpool forward Roberto Firmino showed why he is a “world class” player during their 3-2 loss to Man Utd on Sunday.

Mohamed Salah scored both of the Reds’ goals but Firmino’s touches and confidence on the ball also stood out at Old Trafford.

MAILBOX: Liverpool’s best midfield has Thiago on the bench…

Speaking during BBC commentary, Jenas said: “Roberto Firmino’s touches in the last 15 minutes have been world class, he’s a big reason why Liverpool are back in this game.”

Several of the Liverpool players have been off form recently with Jurgen Klopp’s men dropping from first to fourth in the Premier League in recent weeks, none more so than Trent Alexander-Arnold.

However, Jenas doesn’t think it would benefit Liverpool dropping him as he can play himself into form.

“The function of his role on that right hand side may have changed slightly, and it’s just made his confidence drop and he needs to take that extra touch every now and then and he can’t just do things without looking,” Jenas told BBC Radio 5 Live Football Daily Podcast ahead of the match.

“Look, there’s no doubt that he’s going through a bit of a spell right now, but I wouldn’t go as far as to say. I don’t think he’s in that place basically where I think he’s a youngster, which is strange to say because he’s only 22.

“But he has to play, he’s that good, he’s that good he has to play. There are certain games where he could have been rested, whether that would have helped or not I don’t know, I can’t figure out whether it’s a fatigue thing or if it’s just the team isn’t functioning right and he’s suffering the most within the team not playing well.”