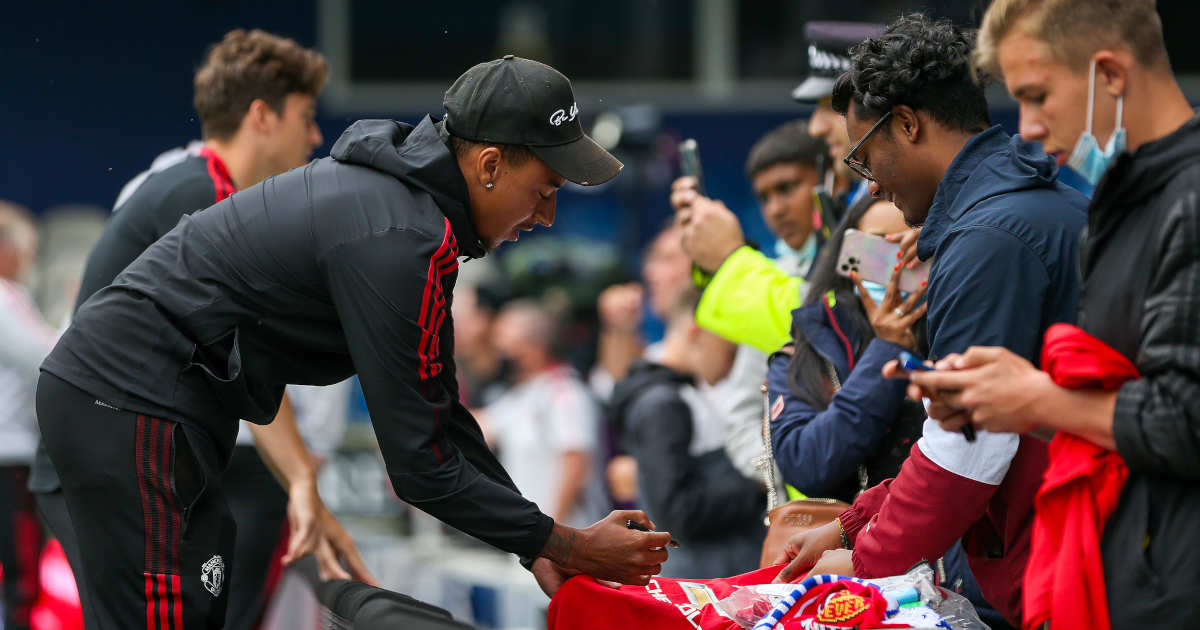 Jesse Lingard was expected to make his West Ham loan spell permanent, but instead he’s fighting an uphill battle for his ‘place’ at Old Trafford.

Jesse Lingard had a season of two halves in 2020/21. Between August 2020 and the end of January 2021 he made three appearances for Manchester United, two in the Carabao Cup (one as a substitute) and one in the FA Cup. At the end of January, United loaned him out to West Ham United. Under David Moyes he scored nine goals in 16 games throughout the second half of the season, a run of form that was good enough to help West Ham to a European place for the first time since 2016 and Lingard back into the provisional England squad for the summer’s European Championship.

At the end of last season, there was considerable speculation that Lingard would make his move to West Ham permanent. He’d been a success in London, and Manchester United were expected to spend heavily in the transfer market, which would presumably push him even further down the pecking order. A move away from Old Trafford would, it was reasonably reasoned, be beneficial to the player, who could get more first-team football than he was ever going to get under Old Gunnar Solskjaer, and to Manchester United, who would be able to free up his wages to further refresh their squad for the new season.

But the new season has begun and Jesse Lingard is still at Old Trafford. The exact whys and wherefores have not been made fully clear, but we might contrast his summer with that of another player who’d been on the periphery of Solskjaer’s plans. Daniel James signed for Manchester United from Swansea City in 2019 and made 59 appearances in all competitions over the next two-and-a-bit seasons before leaving for Leeds United at the end of last month for £25m.

James is five years younger than Lingard, and has subsequently admitted that he lost his confidence in the latter stages of his time at Old Trafford. Perhaps these are the fundamental differences between these two players and why they have such differing outlooks on their futures at Manchester United. Lingard is 28 years old and West Ham was his fifth spell out on loan; those other spells came when he was considerably younger, and after the last at Derby County during the 2014/15 season, he broke through into the United squad, making more than 100 Premier League appearances over the next four seasons.

It seems perfectly plausible that, considering his previous experience of loan spells with other clubs, Lingard still believes that he can break back into the Manchester United first team, even though most felt that he had “no future at Manchester United” from the moment he left Manchester for London. James, on the other hand, is 23 and might well think he’s heading into the peak period of his career, when he’ll be wanting to play first-team football every week. His confidence has been low, and moving to a new club gives him a fresh start. These differing confidence levels may well be what provoked such differing reactions from these two particular players.

It is also worth bearing in mind that other matters can factor into such decisions. One of the curiosities of Lingard’s loan to West Ham United was that it came just four weeks after Manchester United triggered a clause in his contract which tied him to the club for a further year. Had this not happened, Lingard might have left Manchester United as a free agent this summer, but even with last December’s contract extension he could still sign a pre-contract with another club in four months’ time or leave as a free agent next summer.

Considering a transfer fee coupled with wages of £120,000 per week, Lingard might not have been considered good enough value right now for West Ham to justify the cost of signing him. This will all change next summer if he does not sign another contract extension, and it wouldn’t be that surprising to see him sign a pre-contract with another club in January and/or leave Old Trafford on a free transfer next summer instead. It was reported on Tuesday that this would be his preferred option, should he not be able to secure regular first-team football at Old Trafford this season.

Being with a ‘Big Six’ club remains any player’s best chance of winning a trophy. Even if he can’t break into the first team regularly, Lingard still arguably has a better chance of winning a Carabao Cup or an FA Cup at Manchester United this season than he would at most other Premier League clubs. Considering that these are all legitimate options for Lingard, why shouldn’t he stay that one last year with Manchester United and see if he can make it work? It certainly seems to make as much sense as hurriedly signing for another club – quite possibly for less money – with all the risk that any transfer entails.

The contrasting cases of Lingard and James demonstrate that there can be a multitude of different reasons why a player might want a transfer, to go on loan, or to return from loan. Some players find a club that they love or at which they can achieve career-long success, and stay for as long as they possibly can. Others find it difficult to settle, and end up living a more transient life, hoping to find somewhere that will fit. They can be badly advised, and they can make bad decisions themselves. As such, second guessing the motivations behind these decisions might be a fool’s errand.

All we can say for certain is that professional football is about as an insecure a profession as they come, and that this insecurity may be the biggest factor behind why both players and managers make certain career decisions. Not all players have the same motivation for the decisions they make, and Lingard’s loan spell at West Ham seems to have built his confidence to a level where he can return to Old Trafford and challenge some extremely talented footballers for a place in the first team of one of the most famous and celebrated clubs on the planet. If he can’t manage it this season, his form over the last seven months indicates that there will be no shortage of suitors, should he choose to leave.