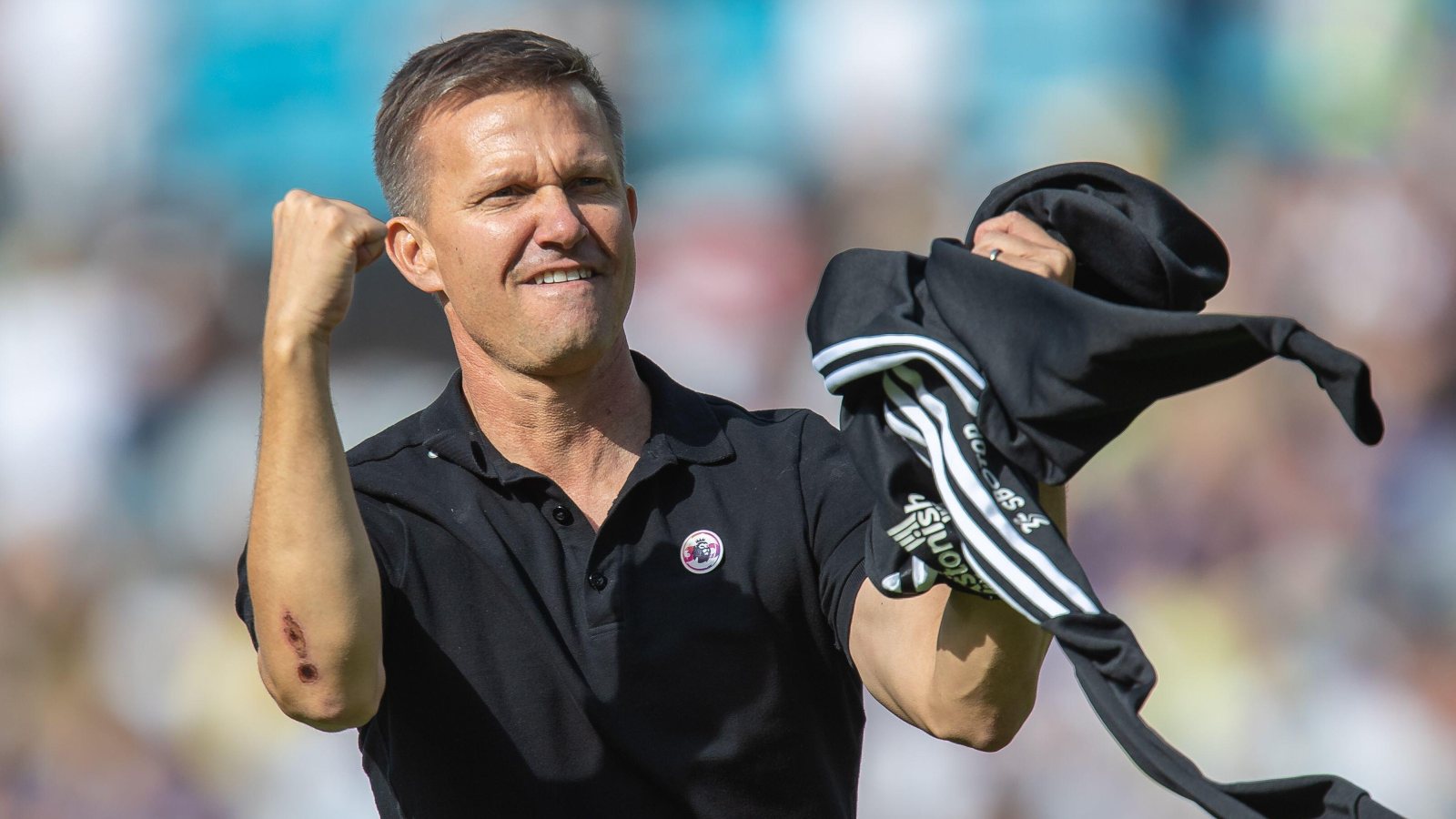 Succeeding Marcelo Bielsa while overcoming anti-American bias was always going to be a tall order for Jesse Marsch. But the signs suggest the Leeds boss might actually be up to it.

On March 5, in the aftermath of his first game in charge of Leeds United, Jesse Marsch made – as you would expect – his first floating head appearance on that greatest of British institutions, Match of the Day. Leeds had lost 1-0 away to Leicester, thanks in large part to Kasper Schmeichel playing his bi-annual blinder.

What with this being a vast improvement on the 20 conceded in the messianic Marcelo Bielsa’s five final games, and having only worked with the team for four days, Marsch stated that he was happy with what he had seen, venturing that – for him, in his first game in charge – the performance was more important than the result.

What followed in the gloaming hinterlands of the programme’s final couple of minutes was some half-arsed analysis (Harvey Barnes was good, Raphinha should have scored), Micah Richards moving his hands about a bit, and Gary Lineker turning to his old mucker Ian Wright, and with a knowingly coy smile, asking him if he agreed with Marsch’s statement. “I’ve never heard that before,” replied Wrighty, in a way that dismissed the remarks as piffle. Much hilarity ensued. Scoff, scoff.

Leeds, Howe and Zaha are thriving but Rodgers, Moyes, Gerrard and Tuchel are all losers

Obviously, the undercurrent to this interaction, the unspoken source of the ribaldry, was that Marsch is an American. Or, as that great spokesman of our age, Richard Keys, referred to him when he was announced as Bielsa’s successor: “American citizen, two international caps, has worked with Ralf Rangnick and was assistant to Bob Bradley at international level at some point.”

Whilst there is an awful lot to wade through here (citizen, anyone?), the thing is that we really needn’t bother. Of course Keysey – Wokefinder General and renowned misogynist, eternally baffled by any managerial appointment whose name isn’t preceded by the word ‘Big’ – was always going to respond in this way.

So, too, his cuddly-wuddly partner-in-crime, Andy Gray, and many other of the old-school, men-at-it brigade of proper football blokes still on our screens and airwaves. What was illuminating about that Match of the Day snippet, however, was that it was not any of the above, but Gary Lineker and Ian Wright: two of the media’s leading exponents of tolerance, open-mindedness and decency. Two men who, even if you don’t agree with their sentiments or believe their necks to be in serious need of retraction, most would have to admit are essentially nice fellas.

What this illustrated was what we already knew, just in particularly fresh, stark terms: we, as a footballing nation, have a problem with Americans. We believe them to be interlopers in our game; hopeless imposters to be sneered at, who simply don’t have the historical connection or the ingrained footballing culture to ever really belong.

To a large extent, this is only natural. Our relationship with America – a nation that we used to own, which rebelled against and then superseded us on the global stage – has long been a complicatedly jealous one, and football (our football) has always remained an area in which we can claim genuine superiority.

Moreover, America already has an ingrained sporting culture. It is grossly commercialised, even by Premier League standards, it is full of adverts squeezed into every available orifice, half-time shows and scantily clad women, and the idea that this could happen to football (our football) is one that genuinely grates.

What’s more, it is also true that ever since they began their as-yet-unrealised attempts to become a footballing superpower, much of America’s foray into the game has been worthy of some derision. Their domestic league is still in many ways a retirement home for the world’s best, in much the same way that it was in Pele’s day. USA ‘94 and its exploding goal-frame nuttiness was just plain weird, and USMNT’s failure to qualify for Russia 2018, from surely the easiest direct route to the tournament, was a farce.

They use the wrong language – a cleat sounds like something you might brand a sheep with – and for most of the Premier League’s lifespan, they bizarrely only really produced goalkeepers.

Yet, natural as it may be, the result is harsh on the likes of Marsch. Ever since he took the job, he has spoken repeatedly about perceptions of his footballing nation in the media, and the work it will take to change them. And whilst there is undoubtedly a tendency within said media to overestimate its own importance, seeing itself as some kind of arch-arbiter of the country’s conversation, what is said does matter to some degree. Words filter through to players, whatever they may say, and intangibles such as buy-in, belief and confidence will always in some sense be impacted by external noise.

Marsch’s post-match comments on Sunday seem to gesture to this. Having just annihilated the current Club World Champions (I know, but still) by three goals to nil, he said that it wasn’t solely the win but the performance that pleased him, as it will enable his players to “begin to believe that the potential is there”.

On one level, of course, all fledgling sides need these games for exactly this reason, but the remarks do feel slightly pointed. Suggestive perhaps of a difficulty in getting his players to trust in the process.

With Leeds’ best two players leaving this summer in Raphinha and Kalvin Phillips, many in the media – them again – were fearful for their prospects. Yet, in the way that Marsch has replaced them like-for-kind-of-like with Brenden Aaronson and Tyler Adams, it is possible to see an attempt to circumnavigate any issues regarding his nationality within the squad itself. Given that both are American, it would be most peculiar for them to harbour the same reservations and pre-conceptions as, say, a proper Yorkshire lad such as Philipps.

This is, obviously, conjecture. But what is most certainly not is the fact that whatever he is doing is working. Whilst it is undeniably very early days, Leeds were phenomenal on Sunday; and, what is more, they were phenomenal in a very particular way.

Theirs was a victory based on the most rampant high-press seen anywhere yet this season. They harried and harangued and scared the living daylights out of a Chelsea side who are usually so composed on the ball. They played in a way that only works with all ten outfield players running themselves utterly ragged, or, in other words, in a way that only works with total buy-in from everyone. Just ask Manchester United what happens when some don’t.

For this reason, Sunday felt like something of a watershed moment. Whilst Leeds enjoyed some measure of success at the back end of last year, it stands to reason that in succeeding a manager as talismanic as Bielsa, and in doing so as an American, Marsch had some work to do in winning the squad round to his way of thinking.

All evidence so far this season seems to suggest that he is absolutely doing just this.

If this continues, perceptions regarding Americans in our game may well be forced to change with them, and if they do, it will not solely be results that do it, but performances like that one. And just maybe, it will turn out that he was right all along.