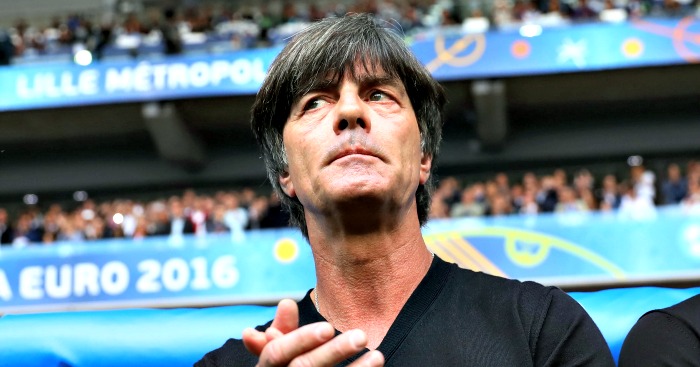 In his damning (but fair) critique of Belgium manager Marc Wilmots for the Daily Mail on Thursday, Ian Ladyman briefly landed upon an interesting debate: How influential is a coach at international level?

For anyone willing to investigate such a question, Euro 2016 provides a wonderful and varied sample. Some have exemplified the virtues of a talented manager. Antonio Conte, Fernando Santos, Lars Lagerback, Michael O’Neill and Chris Coleman have all exceeded expectations, and will emerge from the tournament with boosted reputations.

Some, like Wilmots, have had the opposite effect. Roy Hodgson, Fatih Terim – the third-highest paid coach at the tournament – and Vicente Del Bosque have struggled to exert a telling influence over talented squads, and have performed well below expectations. Their reputations have been endangered, not enhanced.

Amidst the managerial good and the bad, the ugly has been supplied by one individual. Whatever fate befalls Germany as they seek to couple world domination with continental glory, Joachim Low will be remembered more for his ‘trouser antics’ (BBC), ‘scratch and sniff incident’ (Daily Mirror) and ’embarrassing ballsy shame’ (The Sun) when the stories of this summer are retold.

Suffice to say, that would do one of the 19 managers to have ever won the World Cup a disservice. Low could yet join Del Bosque and compatriot Helmut Schon as one of only three to coach an international side to back-to-back major international honours in the World Cup and the European Championship. A difficult quarter-final with Italy must first be manoeuvred on Saturday, before a potential semi-final clash with France and, according to the bookmakers’ odds, a final showpiece with Belgium. The 56-year-old stands on the verge of history, but the majority of headlines are more concerned with his ball-handling.

The near-obsession with the German’s personal hygiene has threatened to overshadow yet another tournament in which he has proven his understated tactical acumen. Die Mannschaft failed to convince in the early stages of this summer – who didn’t? – as Low experimented with different personnel and systems. Operation Mario Gotze has been abandoned after yielding unsatisfactory results; Germany often looked threatening but aimless with a false nine leading the attack. With Mario Gomez, who did not feature once in a successful qualifying campaign, drafted in as the striker however, their cutting edge has been restored. Julian Draxler, who himself played just two of ten qualifiers, has been entrusted with adding dynamism to the attack, and was a worthy man-of-the-match recipient against Slovakia. Joshua Kimmich, capped just once before heading to France, has repaid his manager’s faith, providing much-needed balance at right-back.

Some coaches have proven themselves incapable of reacting and making necessary tweaks in France; others have been guilty of changing too much, too often. Low has struck the perfect balance.

It is a winning method the 56-year-old has refined over almost a decade as the national team manager: To keep changing, but to keep succeeding. Low’s has been the most telling contribution to a phenomenal tournament record that Germany will look to extend on Saturday. They have reached the semi-finals of every World Cup and European Championship since 2006. After acting as the experienced right-hand man to the unqualified Jurgen Klinsmann for two years, he acceded to the throne eight years ago. Germany have since gone from strength to strength.

The simplistic accusation, one which has been constantly levelled at Low, is that he inherited a team of uber-talented, ready-made winners. He is the supposed beneficiary of the country’s drastic overhaul and restructuring after the launch of the Extended Talent Promotion Programme in 2002. But Low has been tasked with nurturing the subsequent talent. He has overseen their development, while maintaining Germany’s natural competitive edge. He has inspired the transition not only to a possession-based style, but from the image of an efficient and formidable machine to an admirable, captivating behemoth. Germany remain a model of excellence, but of attractive excellence.

The most notable aspect of Low’s approach is detailed by Roland Eitel, one of his closest friends and a former adviser to Klinsmann: “Players respect him because he treats them like grown-ups, he doesn’t rule over them,” he says. “He encourages debate and actually listens to his players, takes their views into account for his decisions.” In an era saturated by dictators – Louis van Gaal, Jose Mourinho and Conte among them – Low is the teacher happy to listen to his pupils. It is not a concession of power or authority, but a simple and effective way of connecting with his players.

“I would rule nothing out just now,” Low said with regards to his future in 2014. “It’s very conceivable of course that at some point I will coach a club team again. Why not? I’ve trained myself to think about my future only every two years. As a coach I know that there will be a decision after every tournament.”

The 2014 FIFA World Coach of the Year has been installed as the bookmakers’ favourite to replace Arsene Wenger at Arsenal, but doubts persist over his credentials at club level. His first two assignments – with Stuttgart from 1996 to 1998, and then Fenerbahce until 1999 – heralded excellent results, but his four subsequent club spells almost destroyed his credibility. Germany rescued him by appointing him as assistant manager in 2004, but Low has exceeded expectations to the point that he surely deserves the opportunity to correct the few remaining mistakes on a stellar CV.

If Germany can navigate an incredibly difficult Italy tie, Low will not be the first individual to receive praise – managers leading a squad full of talented and experienced players rarely do. Yet when the opposite comes to pass, and players of such quality fail to perform, the buck stops with the coach. Euro 2016 has been proof of that, with Wilmots the bumbling chef who has created a passable dish despite boasting the best ingredients on the continent. The quintessential meal requires cultivation, preparation and presentation at the hands of a culinary master. Not everybody can Ready, Steady, Cook.

How influential is a coach at international level? In the case of the understated and often forgotten Low, far more than he is given credit for.