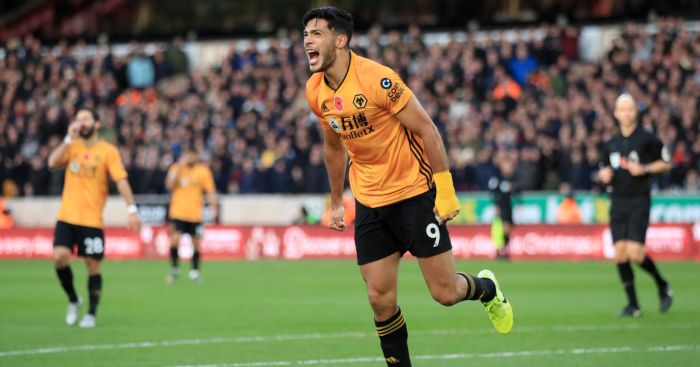 The Mexico international has scored 37 goals in 81 appearances, and a number of leading sides in England are in the market for a top striker.

Frank Lampard wants more firepower at Stamford Bridge while cover for injured stars such as Marcus Rashford and Harry Kane is required at Old Trafford and the Tottenham Hotspur Stadium.

Joe Cole told BT Sport: “Wolves fans won’t thank me for saying it but if I’m Chelsea, Tottenham and Manchester United and you’ve got a chequebook ready to go, he’s the first name.

“It’s all well and good being part of a project but when Manchester United, Chelsea and Tottenham come for you, it may turn your head.

“For me, he could quite easily play for any one of those teams because he’s got so much ability. He’s one of my favourite players to watch.”

Ex-Spurs frontman Peter Crouch also believes that Jimenez would be a shrewd addition for Jose Mourinho in north London.

He said: “If I’m one of those big teams I’d be coming in for someone like that.

“I’m surprised he hasn’t been linked with some big, big moves because he’s been doing this for a couple of years now.”

Jimenez was back among the goals in his most recent outing for Wolves, as he briefly restored parity for Nuno’s side in a Premier League meeting with table-topping Liverpool.

His efforts ultimately counted for nothing, as the Reds ran out 2-1 winners at Molineux, but his stock continues to rise.