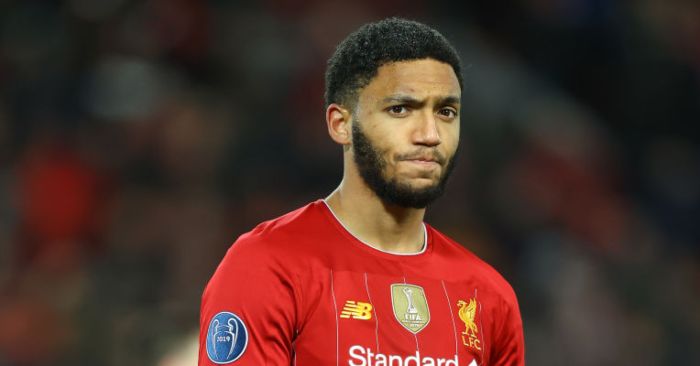 Liverpool might replace Joel Matip with Kalidou Koulibaly, or swap Dejan Lovren. Joe Gomez is used to being forgotten or ignored…

It is an inexact science, albeit one founded entirely on an accepted but undervalued truth: search the name of Joe Gomez on WhoScored and where the weaknesses of any given player are usually listed, the field is left blank.

He is blessed with pace. Andy Robertson acknowledged “obvious contenders” Mo Salah and Sadio Mane but opted instead for his fellow defender when discussing that most banal of football content tropes 18 months ago: which of his teammates would win a 100m sprint.

He is imbued with strength, both physical and mental. The body of evidence is considerable for the former but the latter is even clearer from his determined reaction to two separate long-term injuries by the age of 21. And it is easy to forget that Gomez was booed at his own national stadium almost six months ago, such has been his impeccable and dignified response since.

Consider, too, the positioning, the anticipation, the timing, the awareness, the passing capacity and dribbling ability, even the versatility of a player who was signed from Charlton as a teenage right-back, only to become one of the best young centre-halves in Europe. Virgil van Dijk has helped Gomez but his domineering shadow has hidden him too.

He is no ordinary player and his progression has been no more normal. Signed by Brendan Rodgers in the summer of 2015, he started the season at left-back but tore the anterior cruciate ligament in his right knee that October playing for Gareth Southgate’s England U21s. He did not play his first game for Jurgen Klopp until January 2017, partnering Lucas Leiva in central defence to keep a clean sheet against Plymouth in the FA Cup third round.

“He did well, he is an outstanding talent, no doubt,” said his adoring manager. “It was a real job to do, a few physical fights and then afterwards a complete change from a big strong guy and the small and quick boy came on the pitch,” Klopp added, alluding to those aforementioned virtues of having a genuinely multi-faceted defender, a chameleon able to adapt to any situation.

Perhaps the only thing Gomez lacks is fortune. His combined total minutes across Liverpool’s two most recent Champions League final appearances was one. The commanding performance in the Club World Cup final against Flamengo last December can only partially fill that void. He has been crucial to their success but so often cruelly absent from the defining moments.

That has fed into speculation surrounding Liverpool’s pursuit of Kalidou Koulibaly, rumours that ignore Van Dijk’s actual preferred partner in favour of manufacturing some sort of transfer frenzy. The suggestion is that Liverpool will either offer Dejan Lovren in exchange or sign Koulibaly to replace Joel Matip. The truth is that Gomez is ahead of both in the pecking order.

It is meaningless, of course. The fees mentioned are outlandish in the current climate and it has already been claimed that Liverpool are budgeting for another summer with no major signings. Football transfer gossip exists in a bubble that can never be popped, a fantasy world that has always disregarded harsh reality. It looks even more ridiculous now.

Liverpool have not failed to win a Premier League game in which Gomez has featured since November 2018. The defeat to Watford only enhanced the reputation of a player who, predictably, was sidelined through injury. There might even be an argument that, six years younger, he is more important to the wider picture at Anfield than Van Dijk.

Spurious rumours will never acknowledge that; Gomez does not yet have the same aura or public persona, and his development has been quietly impressive rather than brash, loud or forced. He is what John Stones should have been.

He is also the inconspicuous obstacle both on the pitch and off it: why would Liverpool sign a world-class centre-half when they already have two?