Home Johnny Nic Why has Joe Hart become such an easy target? 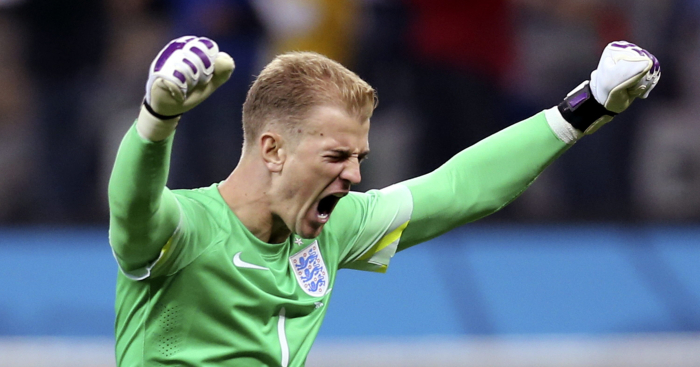 Poor old Joe Hart. All he did was play badly for England in a World Cup and that’s hardly an exclusive club.

The Iceland game in 2016 marked the binning-off of Hart as something of a useless laughing stock. According to amateur psychologists, here was a man over-pumped up with his own self-belief, beating his chest in the tunnel. A man who was over-compensating for his own fears, with noisy displays of bravado – a classic case of someone who couldn’t handle the pressure.

Then Pep Guardiola binned him off too and he’s a genius and never makes any mistakes, so Hart’s critics felt more than justified in dismissing him completely as yesterday’s man. Off he went to Torino, made some more errors and only kept five clean sheets, which qualified him to play at West Ham, still on loan from City. Finally sold to Burnley for a couple of years, he played just three times in 2019/20. In truth, in a long career he’s probably had three quite poor years but those years have totally ruined his reputation. It doesn’t seem fair. His is an almost unparalleled fall from grace.

Nobody, it seems, wants a cup of Joe anymore. So, the reaction to his signing for Spurs as a second or third-choice keeper registered on the fan radar somewhere between mockery and disgust, even though Hugo Lloris is hardly innocent of making exactly the same sort of glaring errors that would see Hart laughed out of north London. Even those saying it was a good move because of his homegrown status had to add reassurance that it was only a decent choice because he wouldn’t play much or even at all. Phew.

In the four post-Iceland years, Hart has been recast from international player to just being absolutely no good.

This is surely a total overreaction by all concerned. No-one needs to claim Hart to be the second coming of Lev Yashin to feel he’s been somewhat harshly regarded in the mob mentality of modern football. Now 33, he was 28 when he did this:

🔥Joe Hart’s performance versus Barcelona in 2015:

🧤 10 saves
😳 5 of 10 saves came from shots inside his area
🔥 Nine one-on-one saves from Messi, Neymar and Suarez

It would seem impossible to go from being the best in your country four years ago to a hapless goon. He must still be a very good goalkeeper – better than the vast majority of goalkeepers, in fact.

To see him being interviewed, he’s clearly a bright, articulate and thoughtful man. He’s spoken intelligently about how to protect your mental health and he seems very positive and upbeat. Yet clearly, something has gone badly wrong in his career. To put it bluntly, however unfairly, it looks like managers and certainly fans have lost trust in him to do the job.

If we rewind to his ejection from City for ostensibly not being able to distribute the ball as well as the manager wanted, that has seemed to absolutely curse him ever since. It has stuck like glue. From being a good international keeper, he became, almost overnight, an ancient clod-hopping lunk, stuck in the previous, now unfashionable era. Yesterday’s man, playing yesterday’s football.

But, clearly, even if you can volley it 50 metres to a player’s feet, it doesn’t inevitably make you a great goalie, as Jordan Pickford continues to prove most weeks. It isn’t the only skill needed. However, it came to be a stick to beat him with and in that he absolutely was a victim of one of football’s many fashions and fads which ebb and flow, becoming briefly established as an unchallengeable orthodoxy, before being subsumed by the next trend. And there’s always a next trend, usually when a team has been successful by playing in a different way to how the last fashionably successful side or fashionably successful manager played. See also: the return of long ball football re-branded as direct, vertical football.

Being considered damaged goods must hurt your confidence markedly, no matter how positive you are as a person. His mistake-littered performances in Italy and for West Ham United suggest in Joe’s case this undermining of confidence was quite profound. His move to Burnley – the one club in the league already overstocked with excellent keepers – ended up making him look even worse.

It is just three years since he played his last England game. It seems far, far longer. Like a picture from a lost world, he looks like a figure from the past, somehow not a contemporary player any longer.

For him to become almost a figure of fun, even being mocked recently for the length of his neck, is utterly charmless. I do wonder if he hasn’t somehow become emblematic of the overrated, under-achieving, overpaid English Premier League footballer and has taken the kicking for all of them. If you look at that Iceland game’s starting line-up, nine are still playing top-flight football. Only Wayne Rooney is playing in a lower division and Daniel Sturridge is again on the market, awaiting the comfort of a new club’s treatment room. None have fallen so far so fast as Hart. Sturridge’s injury-riddled career has taken him out of the loop eventually, but even now, there are those who’ll take him based on past goalscoring feats.

That Joe was so vaunted by the more blinkered, less cerebral, more jingoistic English pundits – especially when getting the elbow out of City – didn’t help his cause either (it rarely does – their endorsement is usually toxic).

Joe Hart was a very good goalkeeper. Of course, he was never perfect and he went through a dodgy phase, as all players do. But for him to be something of a disrespected outcast ever since is one of English football’s least flattering stories of recent years and at the very least, really unfair.