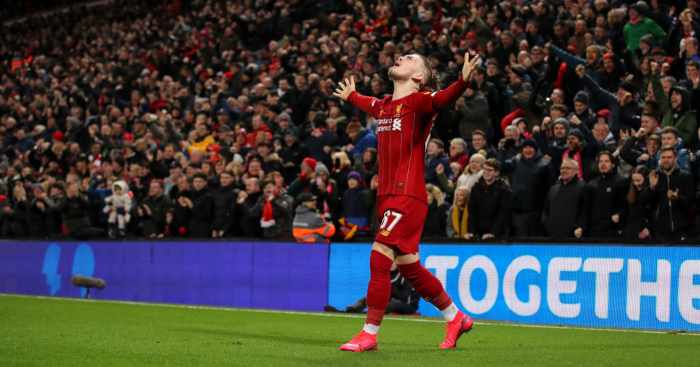 Liverpool legend John Aldridge thinks youngster Harvey Elliott has an “incredibly bright future” ahead of him at Anfield.

Elliott has showed why Liverpool signed him from Fulham in the summer as he’s impressed in his six starts in the FA Cup and League Cup this season.

The 17-year-old has yet to force his way into Jurgen Klopp’s starting line-up, only making one substitute appearance in the Premier League and Aldridge reckons Klopp might send the youngster out on loan next season.

FEATURE: Every Premier League team’s greatest (and next?) one-club man

Aldridge told the Liverpool Echo: “I really think Harvey Elliott has an incredibly bright future ahead of him at Liverpool.

“That the teenager only turned 17 last week shows just what a star he can be as he gets a little bit older in this set-up at Anfield.

“You can’t be the youngest player in the Premier League’s history if you are a dud. Fulham saw that and Liverpool did too, so they brought him in last summer.

“Looking at him, I would say his future is as a winger. He seems to be an old-school winger and it is a difficult one to play.

“Liverpool will be looking where Elliott’s best position is and he could even become one of the three in midfield as an attacking type or as part of that front three, but he’s got to add goals to his game.

“It will be tough, of course, given Liverpool’s current standing in the game but he has got the ability, no question. He is grounded too from what I have seen and that can go a long way.

“They might send him out on loan in the future but the fact that he has had senior game-time already shows you how highly Jurgen Klopp rates him.

“And Klopp will be assessing him in training every day, too because the level Liverpool play at when they are at Melwood will find players out if they cannot match it.

“If players are not up to it, Liverpool will find out at training, so Elliott must be doing all the right things that are being asked of him and he will be picking Klopp’s brain on how to improve so that can only be a good thing for all concerned.”