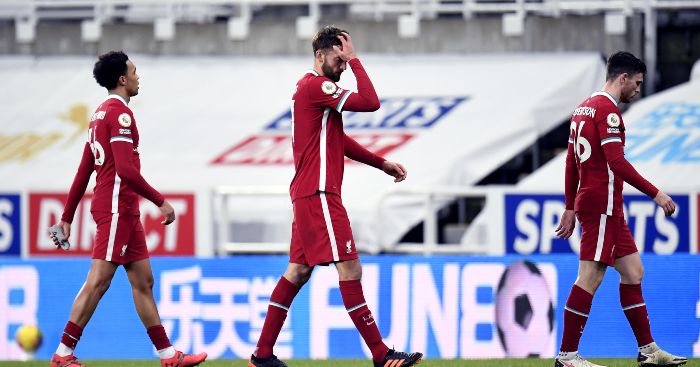 The Reds have struggled with injuries to their back four this season with Jurgen Klopp losing Virgil van Dijk and Joe Gomez to serious injuries.

Joel Matip has also been in and out the side with issues, while Trent-Alexander-Arnold had a spell on the sidelines with the likes of Neco Williams, Nathaniel Phillips and Rhys Williams having to step up for the champions.

FEATURE: How long since every Premier League club has topped the table

United, who play Burnley on Tuesday night, could be three points ahead of Liverpool by the time the two sides meet next Sunday and Aldridge fears that the Red Devils could exploit their “weaknesses”.

On the clash with Man United, Aldridge told the Liverpool Echo: “I think it’ll be a pretty open game and they’ll sense our weaknesses in trying to hit long balls between young Rhys Williams or Nat Phillips and Trent Alexander-Arnold.

“That’s what teams do, they pinpoint that area because our full backs get forward and take up advanced positions, so then we struggle.

“The left channel is not too bad, because Fabinho looks up and sees it but for the young lads – as well as they’re doing and they are doing superbly – it’s really hard.

“Teams have a lot of quality and players who can put the ball in difficult areas with people chasing them – the likes of which [Marcus] Rashford will do.”