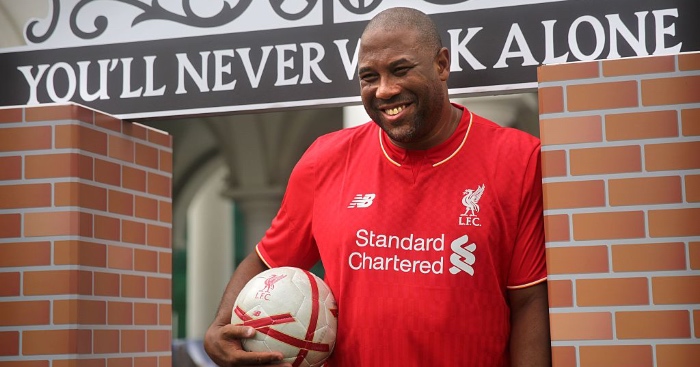 John Barnes has questioned the defensive capabilities and mentality of Kylian Mbappe, as Liverpool continue to be linked with the Frenchman.

Mbappe could be on his way out of France in the next year after reportedly telling PSG he wants to leave.

That’s sent the footballing world into a frenzy as Real Madrid, Liverpool and Juventus are all linked with the player.

But Liverpool legend Barnes isn’t so sure about whether the Reds should sign Mbappe.

Barnes also spoke about Dortmund Jadon Sancho, who could be on his way to the Premier League.

Speaking recently, Barnes said: “Liverpool now can attract the best players in the world. The kind of guys that we should be attracting are going to have to fit into the Liverpool philosophy, which means selflessness, humility, working for the team.

“No matter how good you are, Klopp will be looking at if you’re willing to come and work for the team and not feel superior to your team-mates.

“I’m looking at Sancho and Mbappe in particular thinking; are they the right characters for Liverpool?

“Maybe Sancho is. Mbappe I don’t know, he’s a very talented player. But is he going to work the way Mane and Salah works defensively? I don’t know.

“I think Timo Werner would have been ideally suited to us but I think he wanted guaranteed first-team football every single week, which he wouldn’t necessarily get at Liverpool, so that’s probably why he didn’t come.”

When asked about Liverpool’s recent recruitment, the former player said: “Thiago and [Diogo] Jota were fantastic signings alongside [Takumi] Minamino, who was also a good signing.

“Those three are players who you want to come into the squad should anyone get injured. For two, three weeks they can come in, and they can maintain that momentum and the consistency.

“I think Jota and Thiago can play for six, seven months in the first team and they can continue to make Liverpool win games and play consistently well, which is what you want.”