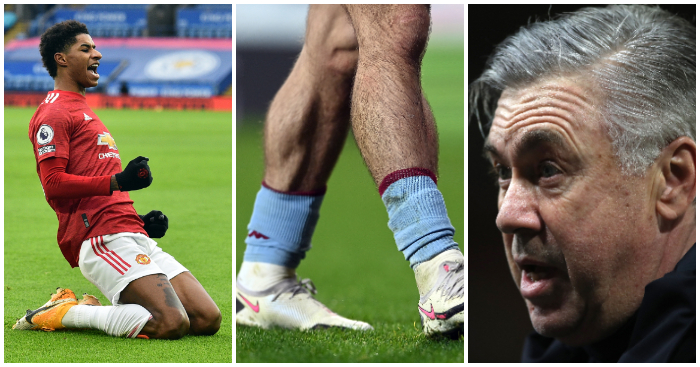 It’s the end of the year, a time to look forward, to look back and then pass out after too much vodka. It’s been a hellish year, but it’s not been all bad. Here’s someone we can all celebrate at every Premier League club in the last 12 months.

Liverpool: Andy Robertson
One of the most dynamic full backs and thrilling crossers of the ball in world football and – better yet – in an era of distant, glamorous multi-millionaire footballers, he still looks like a boy fae a scheme.

Manchester United: Marcus Rashford
Playing great football while making life better for the poor and providing an example to a useless government, meaning we can shout at this bunch of appalling freaks “This is what you should be doing, you ignorant, useless, soulless ghouls.”

Leicester City: Jamie Vardy
The finest sight in English football is still watching JV speeding angrily onto a through ball, his body full of caffeine and omelettes. Everyone knows he’s going to do it, but no-one can stop him.

Everton: Carlo Ancelotti and his quizzical eyebrow
Apparently an autonomous lifeform, it now seems to be getting higher up Carlo’s head with every month that passes. Soon it will disappear over the back of his head.

Aston Villa: Jack Grealish
Such a great, exciting player but man, look at those bulbous calves. They have a hypnotic, almost pornographic quality to them. We want to turn away and not look, but we cannot help it. They look like they’ve been carved from a beautiful, glistening smoked ham.

READ MORE: The football media hits and misses of 2020

Chelsea: Frank Lampard
We must thank Frank for proving once again that if you’re a popular English ex-player you can be anything from no good to alright and be praised like you’re great. Some traditions are worth keeping.

Spurs: Son Heung-Min
Who doesn’t like watching him run really, really fast? His feet don’t seem to touch the ground, perhaps he is floating. There is certainly something special, almost otherworldly about him. There really is only one Sonny.

Southampton: Ralph Hasenhüttl
After years of merely being a comedy name for a doggie, Ralph has made the name Ralph cool again. Nothing he achieves in football will match that.

West Ham: David Moyes
He’s 57 but look at him pitchside; he still wears the puzzled, frightened and embarrassed expression of a teenage boy waiting in a lingerie store while his mother buys a bra.

Leeds United: Patrick Bamford
Proof that the middle-classes can actually play football. And proof that you can be a bit rubbish for years and still come good at the top level aged 27.

Wolves: Nuno Espírito Santo
For looking like he’s walked straight out of the Old Testament clutching some stone tablets and with a burning bush nearby.

Arsenal: Mikel Arteta
For proving that working with someone who is really good doesn’t make you really good and that a black rollneck sweater does not an intellectual make.

Crystal Palace: Wilf Zaha
If you make your TV picture black and white, turn the sound down and replay Wilf at x2 speed, he looks like a silent movie star. It’s something about thick eyelashes making it look like he’s wearing eyeliner and the big expressive eyes. If a house fell over him as he was standing in the doorway a la Buster Keaton you would not be surprised.

Newcastle: Allan Saint-Maximin
If thrash metal was a footballer, this boy would be Megadeth.

Burnley: Chris Wood
If nominative determinism is having a name that describes your profession or character, Chris has a surname that describes his physique. He actually looks like he’s made of wood; a mighty oak, perhaps. With him in the team, Sean Dyche can always say he’s got Wood.

Brighton: Graham Potter
The anti-Big Sam. Genuinely interesting, thoughtful and progressive. Very much the teacher you wish you’d had at school.

Fulham: Scott Parker
Still looks like that Sixth Form prefect that your mam and dad thought was a nice boy and wished you were more like.

West Brom: Big Sam
For setting new standards of self-regard but still getting the sort of absolute ass-whupping off Leeds that delighted everyone who is not a WBA fan, and even some who are, but are appalled to have him as manager and believe relegation is definitely a better option.

Sheffield United: Oli McBurnie
For persisting with the hipster beard, about five years after they fell out of fashion along with paying £3 for a bowl of cereal in a cafe, fastening the top button of a plaid shirt and pretending you like vinyl records.