Home Johnny Nic All hail Fabio Cannavaro, too short and handsome to be THAT good 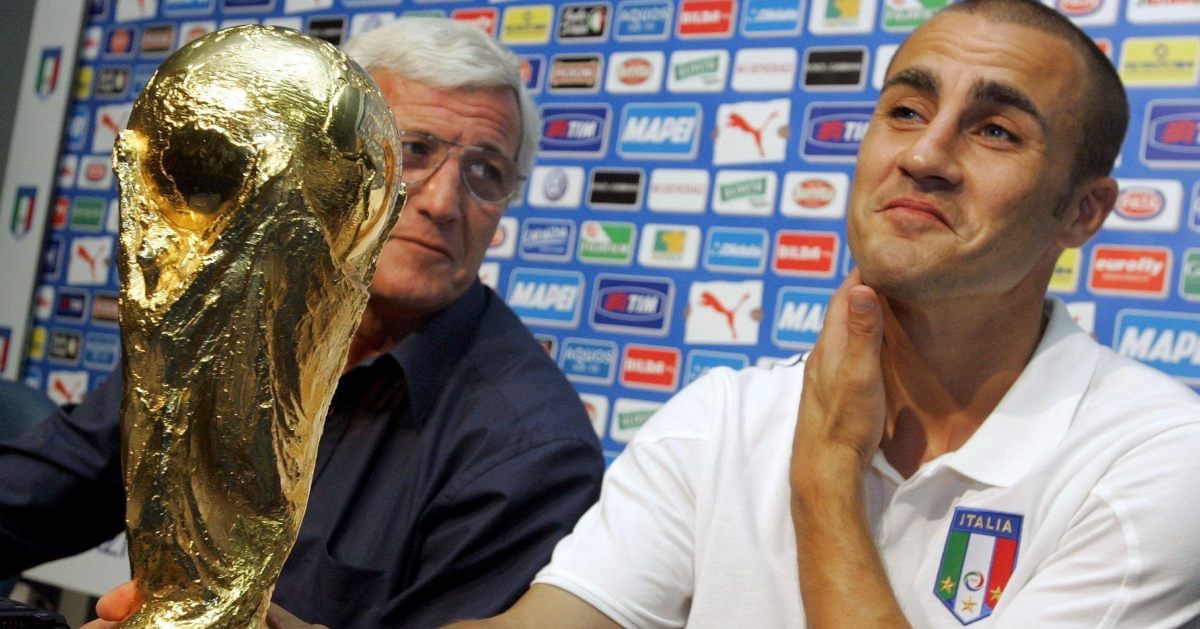 You have to be bloody good to win the Ballon d’Or as a defender. Canny Fabio is one of only three to pull it off…

From an early age at Napoli he showed a talent for anticipation and hard-nut bravery that would serve him well for the rest of his career. But the club were boracic so in 1995 sold him to Parma where he quickly became club captain and formed an amazing tight partnership with Gigi Buffon who joined at the same time and Lilian Thuram, who arrived a year later.

In 1996–97 Serie A season, Parma were runners-up to champions Juventus, an amazing result, and in 1998-99, he won his only European trophy bagging the UEFA Cup. Along the way Parma beat Rangers 4-2 on aggregate, then Bordeaux 7-2. In the semi-final they gave Atleti a 5-2 kicking across two legs and in the final beat Marseille 3-0. They were the best side in the tournament, led by the goals of Enrico Chiesa and Hernan Crespo, marshalled by Fabio. They won the Coppa Italia too as well as finishing fourth in Serie A.

His time at Parma between 1995-2002 cemented his reputation as a brilliant, though relatively unconventional defender. If the big Roman-nose bruisers in the Giorgio Chiellini mould was the standard, Fabio was very different. He played 291 games for them in total.

With Parma needing cash, he was sold to Inter for 23million euros but even though Inter reached the semi-finals of the 2002–03 Champions League and also finished runners-up in Serie A to Juventus in his first season with the club, it was an unhappy time and one he later spoke of critically. After two years and 74 games he was sold to Juve for a mere 10 million Euros.

In this move he was reunited with Lilian Thuram and Gianluigi Buffon and they propelled the Old Lady to two successive league titles. But it wasn’t to last. After the Calciopoli trial verdicts relegated Juventus to Serie B. He left with Fabio Capello for Real Madrid. He was there for three years and picked up two league titles but he was ageing, lacked pace and began to be exposed by quick players.

He returned to Juve for a season, but had fallen out of favour with fans following his abrupt departure. In an infamous game against Fulham in the Europa League he was sent off and Juve went down 4-1 to Roy Hodgson’s men.

His form by now was rank, due to severe and persistent knee knack. He managed a season at Al-Ahli, picked up a wedge and then retired, ending a 19-year career.

From 1997 he had played for Italy and racked up an amazing 136 games across 13 years, the second most-capped, behind Buffon. Always a strong performer, his international career peaked under Marcello Lippi in 2006 when he captained them to an epic World Cup win. They conceded just twice in the whole tournament: an own-goal against the United States, and a Zinedine Zidane penalty in the final against France. It was always going to be the golden career moment for him.

Since retiring he’s specialised in hoovering up very well paid gigs. He guided Al-Ahli to UAE Pro League and UAE League Cup titles in his first season in charge. He’s also bossed Guangzhou Evergrande in China, Al-Nassr in Saudi Arabia, Tianjin Quanjian in China, Guangzhou Evergrande again, winning the league in 2019, then he took on the Chinese national side for a few weeks, and is now back at Guangzhou.

In 2015 a naughty Fabio, his wife and brother were given ten-month, four-month and six-month prison sentences for breaching orders and entering Fabio’s residence after it had been seized by authorities in 2009, amid an investigation into fraudulent activity and tax evasion. Sentences were suspended and he seems to have gotten away without doing any time.

Why the love?
Defenders rarely get the love the way goalscorers do. The fact he is one of only three defenders to win the Ballon d’Or is evidence of this. So you have to not just do the job and be a stopper, you need to do it with some grace, and style to catch the eye.

I simply don’t think I’ve ever seen a better central defender than Fabio at his peak. Despite being 5’ 9” he had the most prodigious leap on him, out jumping taller strikers effortlessly. While bigger men used their strength, Fabio used his brain. He was a brilliant reader of the game. Again, this is very much an elitist’s artform as it isn’t something you can easily see happening on the pitch. But he saw a move before the man playing it even did. This meant he was often just there to get the ball ahead of a striker. This often looks as if the ball played wasn’t good enough or inadequate in some way because Fabio just nipped in to take it, but it was more often than not as a result of his anticipation of the pass.

And man, the fella could do a tackle. When he had a bit of pace and was fit, he was famous for hunting players down. Watch him as he keeps his eye on the ball at all times, tracking a player, waiting, waiting, waiting and then…bam!…he dives in, takes the ball and emerges with it, trots away and gives it to a midfielder. It looks easy but it requires great timing. As he got older he lost that ability a little but for about 10 years he was a master at it

There’s one clip which I can only find as part of a compilation where he’s playing France in the World Cup. The French player beats the full back and Fabio comes cruising in at top pace, nicks the ball off his foot and zooms away with it. It all happens so quickly, you’d barely notice it as an incident but if you look at him, he’s waiting for that to happen, waiting for his full back to be beaten, has anticipated it and is already upping his pace, ready to sweep in to take the ball. In other words, he was thinking two moves ahead at all times.

He was also a hard man and an intimidating presence. Despite having the looks of an Italian catwalk model, he could really bloody hurt you and had a temper on him too. The red cards he picked up throughout his career are testament to that. This was no tippy-toe fanny merchant.

And yet he played the game with an ease and simplicity that was at times breathtaking. He was a defender who defended. So much so that it almost looks old-fashioned now. Win it, give it. That’s all he did for 19 years and did it like no-one else.

In this game against Germany, you can see it all. Topped off with the doubleheader to win the ball handset up the Alessandro Del Piero goal. It also shows just how brilliant it is to say “Cannavaro” in Italian.

It has to be said that he is a very cool-looking fella. Sexy, even. Tight, smooth, olive skin and a smile that suggests he knows the wrong side of the coin as well as the right.

What the people say
Not a lot of response today. I don’t know why. It may be the defender bias kicking in again. We start with a 4_4_haiku.

– One of three defenders to win the Ballon d’Or, Franz Beckenbauer & Matthias Sammer being the other two, part of an iconic Parma side, lifted the World Cup with an unfancied Italian side, fairy tale stuff

– I always tried to buy him in Football Manager

– The height of shite but an absolute masterful defender. World class on his day.

– How did a man of 5’9″ become a centre back so completely brilliant that he won world player of the year? A modern day mystery…

– Always brilliant, and (until he wasn’t, obviously) always, always there. Is there something in the Italian DNA that makes them produce a conveyor belt of world class defenders who play for about 40 years?

Along with Alessandro Nesta, Christian Panucci and Paulo Maldini, formed the hottest act outside of 'Baywatch'.

Three great moments
His performance in the 2006 World Cup final was staggering. Watch all of this for the full Fabio effect. Watch the leap on Zidane around the four minute mark. Look how high he gets!

He’s in the this frankly far out, trippy fast-cut Nike advert which is pretty much an advert for hallucinogenic drugs

Future days
He seems to like being in China and it seems reasonable to assume that is in part due to the huge money on offer. He did a little bit of punditry on ITV for the 2014 World Cup and it was, to say the least, awkward. His English wasn’t good enough and he basically sat there grinning. Seemed to have no idea who Martin O’Neill was.

His tax issues have become the stuff of tabloid stories in Italy and he wouldn’t be the first Italian to be investigated in this way. Bad Fabio.

In 2013 he made a dodgy defence of the racist abuse Mario Balotelli was receiving. Saying it wasn’t racism it was fear of his talent that drove it. Which was, frankly, mad and wrong. Very bad Fabio.

He’s another in the series who rightly never considered playing in England and that inevitably restricted our every day exposure to him. Today, 10 years after his retirement, his methods of defending would be penalised much more often. His unhesitating commitment to tackling would just mean a lot of cards. This alone should make us pause to consider if rule changes made since are just bad for the entertainment of the game.

He will forever be framed in the world’s imagination in the diamond light of the 2006 World Cup final, holding the trophy aloft after a resolute, brilliant win. And what a legacy to leave that is. Ciao, Fabio.