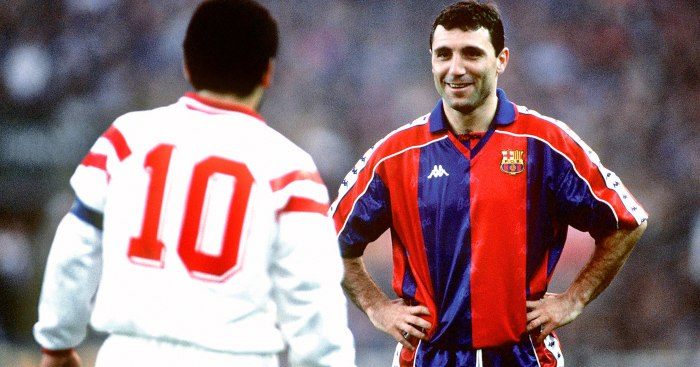 Who’s this then?
Hristo Stoichkov Stoichkov, so good they named him twice, is a 54-year-old former striker, widely regarded as the best Bulgarian footballer of all-time and one of the best in the world at his peak.

He played 595 league games for a total of eight different clubs and scored 289 times. Internationally, he was capped 83 times and had 37 goals to his name.

It all began for him at Hebros, a third-tier Bulgarian club. He played two seasons before attracting big boys CSKA Sofia’s attention. He moved there in 1984 and stayed for six seasons. The fact he got into a six-man brawl in a legendarily-dirty 1985 cup final against Levski Spartak, not for the first or last time, meant he missed some of the following season through suspension. He’d actually been banned for life but had his punishment commuted to a year suspended sentence.

When he returned he really hit the straps and began to show his prodigious talents. He won the European Golden Boot playing on the left of a front three with CSKA Sofia, by scoring 38 goals in 30 matches during the 1989–90 season, securing a third of three league titles in his time there.

This took him to Barcelona where he promptly stood/stamped on a ref’s foot and got banned for two months. Naughty Hristo. But he became the key man in Johan Cruyff’s all-conquering side and won La Liga four times in a row and the last old school European Cup. Though he’d played as a left-sided striker, he could play in many different positions and that was important to Cruyff as he looked for Barca to replicate Holland’s ‘total football’ under Rinus Michels. Stoichkov wasn’t just a normal striker. He came fully equipped with a dancer’s feet, a sprinter’s legs and a middle-weight boxer’s power.

He won FIFA World Player of the Year in 1992 and again in 1994 and was widely regarded as a brilliant maverick striker who, in partnership with Romario, became a feared twin attack. 1994 was his year. The year that defined his greatness. He was brilliant in the USA World Cup. He rightly won the Ballon d’Or.

But a year later, in a typically eccentric move, he went to Parma for the 1995-96 season before returning to the Catalan club for two more seasons.

The last five years of his career saw him playing 112 games for Al-Nassr, Kashiwa Reysol, Chicago Fire, DC United scoring 41 times before retiring. While at DC in 2006, he was sued by a former American University college student whose leg he broke with a violent tackle while playing in a friendly match for DC United in 2003. Bad Hristo. The case was settled out of court in 2007.

He soon began a managerial career with the national side for nearly three years, then it was onto Celta Vigo for six months, Mamelodi Sundowns in South Africa for nine months, Litex Lovech in Bulgaria for five months and finally CSKA Sofia for just four weeks.

To say he’s been a volatile man throughout his playing and managerial career would be something of an understatement. Clearly, he’s not suited to management, making enemies, alienating players, picking fights and generally being disruptive were the defining characteristics of his tenures. In these more sensitive days, he looks to belong to a different era. I mean, his nickname was The Dagger, and that says it all.

Why the love?
Let’s be honest about this, Hristo seems a hard-to-love dude with serious anger management issues. He was accused of racist abuse by Marcel Desailly in 1996 as well. Now in his mid-50s he looks like a mafia boss or hit man. Scary. But that’s what is so good about him too. Today, everything and everyone is enslaved to good PR and to being an inoffensive brand. Back in Hristo’s day, no-one gave a flying feck about any of that, so with 2021 eyes on, the way he was, the way he behaved, the battles he picked and fought seems shocking in a way that it didn’t at the time. The fact that this fury was inside a man of such football talent, a talent that has seldom been equalled or surpassed, leaves us with one of European football’s great enigmas.

He was wild and brilliant; the very essence of rock n roll football. What would he do next? He might beat four defenders and back heel it into the net, or break some poor sod’s neck.

It has also to be said that this edginess made him a massive fan favourite throughout his career. While it should be said that his temper did not always flare up, everyone was always aware that it might. That is the true power of aggression; the threat as much as the actual. We always felt that if anyone was going to end up stripped to the waist punching the referee in the face, it was going to be Hristo.

As a player, he had the close control and tight turn of a shorter, nippier player, but married it with power, strength and aggression. While only 5′ 10″ he appeared to be built out of wrought iron and concrete. It was a killer mix.

Football needs its bad boys, its dark angels, its cold-hearted bastards. And Hristo fitted the bill perfectly with his dark-hooded, corvid eyes, high cheekbones and perma-scowl. He also looked old even when in his 20s and that gave him a touch of the tortured artist.

If you watch a reel of his goals, there was nothing that was beyond him.

Apparently as good with either foot, he was quick enough to beat a defence and if given half a yard there would be no stopping him. From a UK perspective, he seemed exotic and almost mysterious. We had hard men, we had ball magicians, we had great goal scorers, we had intelligent and flexible players, but we rarely, if ever, saw a player who was all those things and more rolled into one.

What the people say
Obviously, you have to be over 35 to remember Stoichkov in his pomp, so this was always going to limit the degree of responses this week. But he’s the sort of character that if you were exposed to him at the time, he really made an impression. We start with a 4_4_haiku

Is his “there are only two Christs” line one of the greatest pieces of sporting ego of all time?

Introduced an era to me that tremendous technical ability can be found outside the top national teams. Everyone turned to like the underdog. Also gave so much to his nation becoming a national treasure.

I put ‘Stoichkov’ forward as a name for our band when I was at Uni. He embodied the songs I had: short, punchy, full of energy, moments of singalong euphoria. Was shouted down in a moment of people not seeing where football and music cross over. Still a bit annoyed.

Living proof…(or is he dead now?)…that chain smokers make the best footballers. I wished i’d smoke when i played football but i started too late.

WC 94. ARG 0 BUL 2. I was there. OMG we’re gonna see Maradona! No, he’s just failed a drugs test. OK then Batistuta. Yep but he just spent 90 mins diving and moaning. But there was this stocky little left-footed guy on the other side, and he was bloody brilliant…

Stoichkov, along with Hagi and Romario, completely rocket-charged my adolescent self’s sense of footballing wonder. Effortlessly cool & you couldn’t watch them very often. USA ’94 is an underrated tournament, if only for the fact that it showcased all 3 in their pomp that summer.

I believe Bob Wilson described him as ‘one mean looking dude’ during USA 94, and that’s how I like my footballers. Bulgaria-Romania was the dream final we were denied

Look how quick he is for another classic World Cup goal.

Scroll to 5:44. With one flick he leaves the defender for dead, then there’s no catching him. Note his running style with elbows out to keep the opposition at bay. There was no stopping this machine.

What now?
These days, he seems content to be a TV pundit. I imagine him to be Bulgarian TV’s version of Graeme Souness, sneering at the lily-livered modern footballer, miming elbowing someone in the face with the glow of love in his eyes. Every firm challenge or outbreak of on-pitch violence met with the wry smile of an old streetfighter remembering his glory days.

Those final nomadic years really took the edge off his legend and his career achievements. Perhaps he tried to live off the 1994 peak for too long. After all, he was only 28 at that World Cup, though looked 48. In that sense he only had two-thirds of a career really: his 11 years at CSKA Sofia and Barcelona. For us in the UK, we only really saw him on European nights and at tournaments or in qualification matches. A couple of his Parma games were on Channel 4’s Serie A coverage too. That he is still spoken of in hushed tones shows just what an impression he made though.

He is without doubt his country’s best player and easily one of the most imposing presences in late 20th century football. That is some achievement for any player. And if you disagree, Hristo will be mad and you wouldn’t like Hristo when he’s mad. I’ll leave you with one of his famous quotes about himself: “There are only two Christs… the other is in Heaven.”