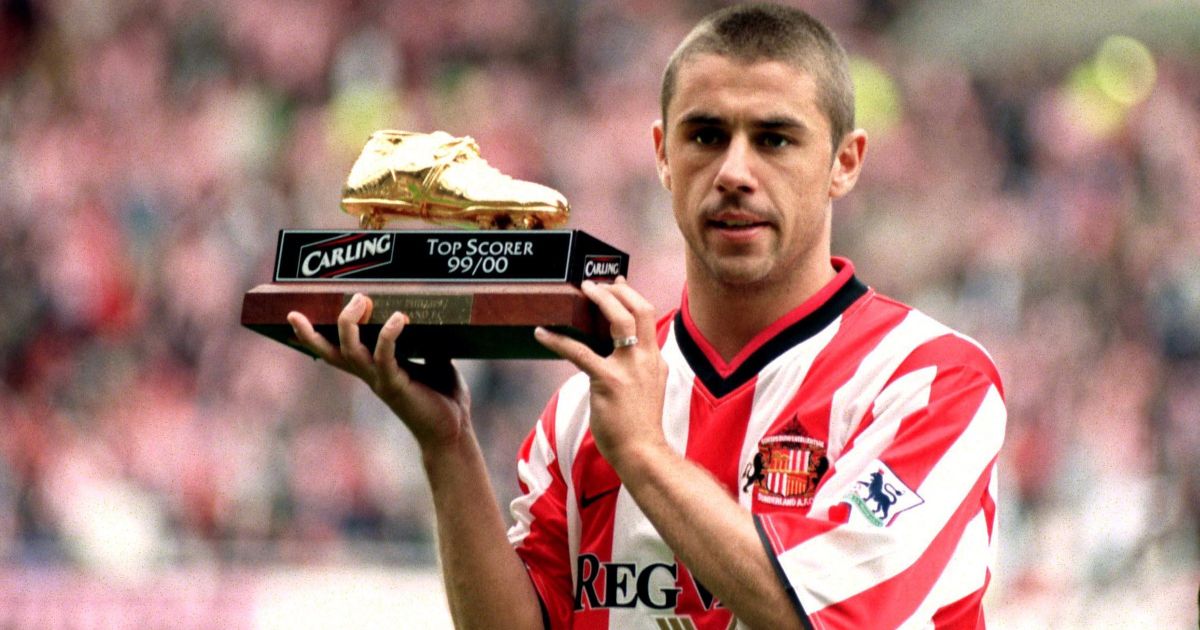 Johnny Nic can’t fathom why a big club never took a punt on Kevin Phillips. But that only makes Super Kev more endearing…

Who’s this then?
Kevin Mark Phillips will be 48 in July and is a 5’ 7” former striker for a plethora of Premier League and Championship clubs. Unusually, he played on and on and on, managing to score for Leicester City in his 41st year on this beautiful spinning green and blue marble.

His professional career got going a little late at Watford for whom he signed from Baldock Town aged 21 in 1994. After three seasons and 25 goals in 65 games, he was transferred to Sunderland for £325,000

At this point he was already 24-years-old and he hit the ground running. The 1997-98 season under Peter Reid was the best of his long career, netting 35 goals in 48 games in the second tier (then called Division One, which it wasn’t).

He followed that up with 25 in 32 to help Sunderland get promoted and in his first season in the top flight scored 30 in 38 to achieve their highest Premier League finish of seventh. In 1999-2000 he won the European Golden Shoe, Premier League Golden Boot and was voted Premier League Player of the Year.

Throughout his six seasons at Sunderland he struck up a partnership with Niall Quinn. During their three peak years between 1997 and 200 they netted 140 goals between them. The subsequent seasons were not as fruitful and aged 30, Phillips left for pastures new in Southampton. In his 235 matches for Sunderland he scored 130 goals.

His two seasons on the south coast saw him add 26 goals in 76 appearances to his tally. He moved for an unsuccessful season to Villa and then to WBA in the Championship. His two seasons there were hugely successful and in 81 games he got 46 goals, helping them to gain promotion. He completed the trio of West Midlands clubs on his CV when he went to Birmingham City for three seasons. The first was successful, scoring 14 in 38, getting them promoted. In 2010 he won the League Cup with Blues. When he left in 2011, it was widely assumed he’d be packing it all in.

How wrong we were because he moved to Blackpool, promptly scoring 17 in 45. His second season at the Seasiders saw his opportunities limited, but undeterred, he went to Palace on loan and promptly got seven in 16 games to take him into his 40th year, winning them promotion with a penalty in the play-off final. He signed on for a year but left after six months, moving to Leicester in the Championship, scored two more goals in 12 games, won the league with them and finally hung up his well-travelled boots, put up his feet and took a rest. Well played Kev, well played, indeed.

He’d ended his career with 660 games under his belt and a phenomenal 282 goals for nine different clubs.

Since retiring he’s coached at Leicester, Derby and Stoke but shows no inclination to get into management and fair play to him for that. It looks like one of the most thankless tasks, one that you’d need to be a bit of a masochist to want to endure. 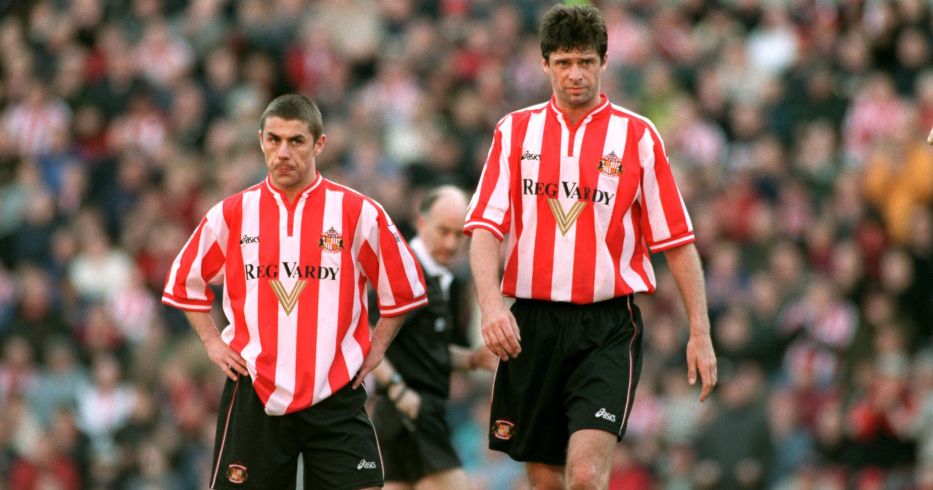 Why the love?
I think we all love a journeyman, that most resilient of players who deploys the ‘have boots will travel’ principle to the max. He was capable of scoring some absolutely incendiary strikes, but he always seemed so down-to-earth and so grounded, that he embodied the game’s best working-class roots.

There was never anything fancy about him, right down to his distinctive accent, but you underestimated him at your peril. But despite this, he only played eight times for England and failed to score. The fact he played for Sunderland at the time definitely counted against him, at least until Kevin Keegan took over the England management role.

There was a feeling that had he played for a big club, he’d have played a lot more of England but a really big club never came in for him, possibly feeling that he was too short or just didn’t offer anything other than 282 goals. But frankly, if you wanted someone to put the ball in the net, season after season, Phillips was your man. I bet if he’d played for Manchester United or Arsenal in the late 90s he’d have netted over 40 per season and would’ve been an England regular.

But then, there’s nothing wrong with just being a brilliant league goalscorer. Someone’s gotta do it.

What made Phillips so good? It’s often said you can’t teach an instinct to score a goal, that it somehow comes naturally, and he’s perhaps one of the finest examples of that notion. He had a happy knack of being in the right place at the right time, that looks like luck, but isn’t. He typically didn’t waste much time fannying around with the ball, more usually, he took one touch and slotted it home with quick feet.

He had a quick brain, able to see the smallest of gaps in a defence and exploit them. He was a nerveless penalty taker and a snaffler of any spilled ball by the keeper. He did rely on some service though. He was rarely going to take on a defence all on his own. The times in his career where he’s suffered a dip in goalscoring tends to have been when he didn’t have that service. Being a bit of a shorty, he had to find space and use it effectively as he couldn’t go up against defenders physically. You could not use Kev as a battering ram. This probably extended his career by five or six years.

That partnership with Niall Quinn, when it was so successful, sort of followed him around, which is probably to do him a disservice really. He was far more than the little ‘un to the big ’un. Even so, there was a reason he was the dominant goalscorer in that partnership and it was clear that the big Irish man made space for Kev, which he exploited ruthlessly in his peak three seasons. The big one wins it, knocks it down for the nippy little ‘un to score. It was an irresistible concept and there was no stopping them for a while. Proof, perhaps, that football can be a simple game.

What the people say
I was surprised we didn’t get more input from the public this week, with Phillips being something of a trans-generational player, starting in the early 90s amongst the muck and nettles and not finishing until the more perfumed, man bag days of 2014, a lot of us must have seen him play. Perhaps, as during his career, the fact he never played for a really big club counted against him. That he’s still under-valued and underrated is, in a small way, shocking…

Kevin Phillips was the first foil card I got.

‘Was the most prolific striker in Europe. Whilst at Sunderland. Under Peter Reid. No, I haven’t been drinking.’

‘One of the last of the ‘big man, little man’ strike partnerships the top flight has seen. And one of the best.’

‘Was tremendous for Sunderland alongside big Niall Quinn, was the highest scoring striker in Europe! But still didn’t get a fair crack with England & in truth I felt sorry for him at the time.’

Kevin Phillips was a pocket battleship, a fox in the box and old fashioned goal poacher. Never really got the credit as a profilic goal scorer.

‘Absolutely bloody loved him. Like a Romario-lite. If it needed a toe poke, it got a toe poke. Also capable of ridiculous finishing from any angle or distance. I feel as though he is / was heavily under appreciated because he never played for a traditionally elite club.’

‘Really good pundit. Should get more TV time (unless he’s working for a station I don’t listen too).
The little and large partnerships are pretty obsolete now which is a shame.’

‘I was at uni in Sunderland at the time of his peak years – he was adored in the City and I remember him (and Quinn) destroying (my team) Chelsea. Was unlucky to have such strong competition for England at the time as definitely should have a lot more caps.’

‘He and his family used to come into the Waitrose I worked at in Lichfield. His wife would do the shopping and he would spend his time just playing with his kids. No airs or graces just came across as a really nice bloke, and a good dad.’

All four sides of Gigg Lane rising to applaud him, after he scored four goals in Sunderland’s 5-2 win which took them into the PL in April 1999. All the more remarkable the Bury fans applauded him, as the result pushed us closer to the trapdoor we feel through weeks later.

‘One of those players – Harry Kane is the best current example – who, if you broke all their individual attributes down, *shouldn’t* have been all that good, but are way, way more than the sum of their parts.’

‘Teams bought Kevin Philips just to play Coventry. He always seemed to score against us. If we’d have bought him, he’d have probably scored a ton of OGs’

Leave this to me. Palace v Watford, play off final. pic.twitter.com/DrpechoOay

Three great moments
Pick that one out:

If someone did this today, it’d put £50million on their transfer fee:

Future Days
It seems fairly certain that our Kev will not become a manager. He just doesn’t seem to have that aura about him, which is no bad thing. It must be a thankless task to have to berate, cajole and woo players into playing for you. Coaching seems a more natural role for him. I’d imagine he’s very good with kids, having that sort of light-hearted, cheeky personality that kids would respond well to.

Last year he helped Baldock Town, his alma mata raise over £26,000 to help them through the pandemic. It was typical of the man, a player who not only had not forgotten his roots but was still very much connected to them, understanding that while he had forged a great career for himself, it was nourished by those early days at Baldock.

On the death of Glenn Roeder recently, he spoke warmly of his former boss. “He gave me the opportunity and the chance to live my dream and so I will be forever grateful. He was there when I lost my dad and convinced me to carry on playing football. He was a big inspiration for me.”

Kevin Phillips was an honest player, the absolute salt of the earth and a man who knew he had made the most out of his talents in life. His story should be an inspiration to many players. He started before the big money had really kicked in and he finished after it had really begun to ruin top flight football and yet he seemed unaffected by any of it, as delighted to score his last goal as he was his first.

For a certain generation he will forever live in the imagination, on a dark wet Northern night, running onto a ball nodded down by big Quinny, burying it in the corner of the net and peeling away arms raised.

Cheers Kev. You were one of the best.